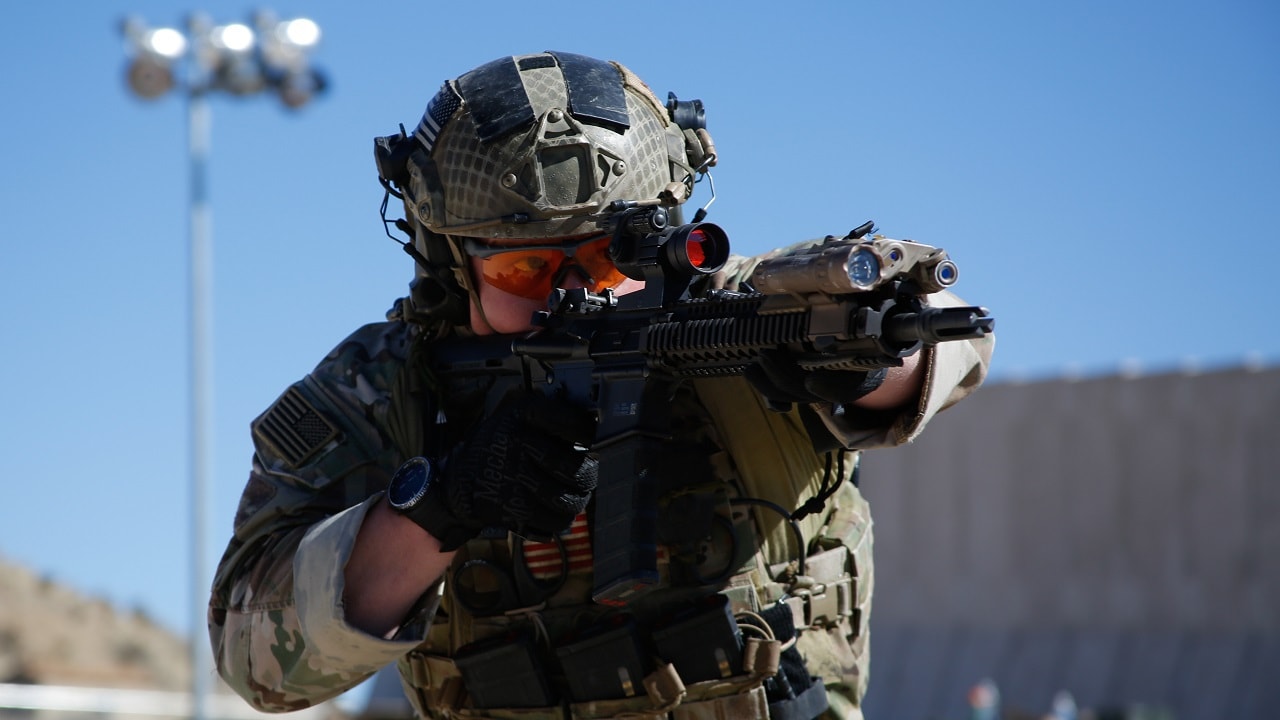 It was supposed to be a night of joy, of promising futures, of new life, as three Raiders headed to a bar in Erbil, Kurdistan, to celebrate the end of 2018.  But before the sun rose, one American was critically injured and would end up dying. Three more would soon be fighting for their innocence in court.

Gunnery Sgt. Danny Draher, Gunnery Sgt. Joshua Negron, and Chief Petty Officer Eric Gilmet had far more to celebrate than the dawning of 2019. Gunny Draher’s wife was expecting a child, and he was getting promoted to head of his own special operations team. Gunny Negron was slotted to follow him on that assignment as Draher’s second-in-command.

The bar was packed with contractors, civilians from several agencies, and service members of all ranks. Their paths had merged in the fight against the Islamic State, which was still plaguing the area outside of Erbil, a city that has managed to remain mostly unscathed from the Global War on Terror.

According to Article 32 proceedings, Rick Rodriguez, a contractor with Lockheed Martin and a retired Green Beret, was also in the bar – Rodriguez was a regular at the establishment. As the night continued, Rodriguez got into an argument with an unknown person. Approximately two hours later, he again got into an argument, this time with Gilmet. Rodriguez was escorted out of the bar, but when the three Raiders left the establishment, things reportedly took a turn for the worse.

According to the proceedings, Rodriguez physically attacked the three commandos, punching Draher twice in the face and going for a third punch before Negron responded, knocking out Rodriguez with a single punch. The former Green Beret hit the pavement and stayed down.

By that point, the group Rodriguez was with had abandoned him. But the three Raiders stayed and provided Rodriguez with first aid. They then transported him to base for further medical attention. Gilmet, a Special Operations Independent Duty Corpsman, stayed with and monitored Rodriguez all night until he was relieved.

However, Gilmet was soon recalled to the housing unit – Rodriguez had become unresponsive. The retired Green Beret was soon transported to a hospital in Germany, where he died four days later. The cause of death was determined to be complications caused by his intoxicated state and from having choked on his own vomit.

An Article 32 hearing is the equivalent of a preliminary hearing in the civilian world. It determines whether a case merits a court-martial. After their hearing, the three Raiders were charged with involuntary manslaughter, negligent homicide, obstructing justice, and violations of orders. The charges went against all available testimony and evidence, including CCTV video that captured the whole incident.

The preliminary hearing officer recommended dismissing the obstruction charge, because he did not find any probable cause. However, Maj. Gen. Daniel Yoo, MARSOC’s commanding general at the time and the convening authority for the case, moved forward with all charges.

“What the prosecution is really attempting to do is pile on spurious charges of manslaughter, negligent homicide, and obstructing justice, and then send the defendants to a court-martial for what effectively was an accusation that the defendants were out past curfew and consuming alcohol while in-country,” Nick Coffman, a journalist with United American Patriots, told 1945.

During that New Year’s Eve night, the Raiders were out drinking, thus violating General Order 1, which prohibits alcohol consumption in the Central Command’s area of operations. The prohibition is there for cultural and religious reasons – Islam bans alcohol for its followers.

But while Erbil is located in Iraqi territory, its culture is anything but Iraqi.

“[Erbil is] a different area than the rest of Iraq. It’s much more permissive,” NCIS Agent Matthew Marshall said during the Article 32 hearing. “It’s controlled by the Kurdistan Regional Government. They generally do things differently and dance to a different tune than the different government sectors of Iraq. So it’s much more of a permissive environment.”

Gunnery Sgt. Draher told 1945 that the operational and cultural realities in Iraq have changed greatly from the time of the initial invasion to the time of the campaign against Islamist insurgents. “Iraq isn’t the same place as OIF I and OIF II,” Draher said. “Erbil could be a city in Europe, or even here in the States. Erbil isn’t Baghdad.”

Several other Marines were issued non-judicial punishments for drinking, or for being out without permission. Indeed, the three Raiders were the only ones who had taken the trouble to sign out and get that permission. And while they missed curfew – a violation typically punished by a slap on the wrist – curfew wasn’t enforced consistently enough to justify such a response.

“At the time that the incident took place, the Marines were allowed to be out in town and were permitted to visit the establishments in Erbil. To say the prosecution is being overzealous is an understatement. The command overreacted and aggressively tried to prosecute this case when, realistically, they should have pursued a non-judicial course of addressing the situation. They tried applying a tourniquet when a band-aid would have sufficed,” added Coffman, who has written a screenplay on the events surrounding the case.

The maximum punishment for violating General Order 1 is two to three years in prison. The maximum penalty for all the charges combined is 25 years behind bars.

The MARSOC 3, as they have come to be known, never accepted the prosecution’s several plea deals. They are confident in the facts of the case and their innocence.

Caught in whirlwind of scandals

The MARSOC 3 were in the wrong place, at the wrong time. A few months before, Chief Eddie Gallagher, a Navy SEAL, had been accused of war crimes in Iraq. His case, and the authorities’ handling of it, drew national interest when former President Donald Trump intervened on behalf of the SEAL and pardoned him. (Gallagher had been acquitted of the war crimes charges but convicted for a lesser charge.) The Gallagher case carries a complicated legacy, and the crime he was accused of is far more grave than any of the accusations against the MARSOC 3. But that wasn’t the only case hounding the special operations community at the time.

The U.S. Special Operations Command, or SOCOM, seemed to be facing a new scandal every month. Allegations of drug abuse, war crimes, and even intentional fratricide were dragging the reputation of America’s elite into the mud. A few weeks before that fateful altercation in Erbil, the Department of Defense had ordered an investigation of SOCOM’s professionalism and ethics.

“With a few incidents that occurred in SOCOM in the past few years, I believe that MARSOC and the Marine Corps seeks to make an example of what they felt is embarrassing by enforcing ‘good order and discipline,'” Maj. Fred Galvin, a retired Marine, told 1945.

Galvin has first-hand experience with the unfair ways of the Unified Code of Military Justice. He and seven operators of MARSOC Fox Company were accused of war crimes in Afghanistan in 2007. Despite all available evidence indicating that they had acted within the laws of war and that they did not murder any Afghan civilians – and despite being acquitted – Galvin and his men were ostracized and remained the object of criticism for years.

Ironically, the three Raiders are being prosecuted for doing the exact thing the U.S. Marine Corps has trained them to do – fight back when attacked, and never leave anyone behind.

“The Marine Corps takes pride in having a warrior ethos,” Gavin said. “The Corps rewards through promotions, part of which are based upon martial arts prowess. And then when one Marine is repetitively assaulted by a larger and heavily intoxicated retired Special Forces combat veteran, and a Marine defends his battle buddy by using the minimal amount of force with one punch, the leadership spends nearly 2.5 years in an unjust case that fails to demonstrate two of the Corps’ leadership traits—’decisiveness’ and ‘justice.’

“Not all officers are the same. Some experience war on the ground. But officers who only experience war at the audible or possibly visual sense levels, don’t have the same experiences as those who have experienced war at the touch and smell level,” he added. “The former type of officers, chateaux leaders, often accelerate their careers through virtue signaling as they accuse others of wrong-doing.”

Speaking on the condition of anonymity, several operators from all tiers of the special operations community told 1945 that there is an alarming disconnect between guys on the ground and senior leadership. Although this disconnect doesn’t significantly impact everyday operations, it is particularly dangerous in disciplinary cases, such as that of the MARSOC 3.

Consequences at All Levels of Life

For the better part of four years, the three Marine Raiders have fought to defend their innocence with their very own Marine Corps. Now there seems to be some light at the end of the tunnel.

Draher and Negron are scheduled to appear in court in April. Gilmet’s acquittal suggests that they might be acquitted, too. But the struggle isn’t over. This case has impacted the three commandos in several ways.

Conviction would remove their honorable discharges and void their retirements. (Negron is already over the 20-year mark, while Draher and Gilmet have served for 19 years). But their special pays for skill-sets such as parachuting, combat diving, and explosives – put together, these add up to a considerable sum – have already been withheld, and their security clearances revoked.

Finally, the three men have been forced to do menial tasks that don’t capitalize on their wealth of operational experience.

Negron, for example, volunteered to be an instructor in MARSOC’s Assessment and Selection course, but he was denied. Indeed, MARSOC leadership chose to take Raiders from frontline teams to fill out the instructor slots despite a shortage of operators. Negron was relegated to barracks duty.

Further, civilian opportunities have been severely limited. Gilmet was denied from a Master’s degree course, and also from the Honors Foundation program, because of the outstanding case.

“They told us to work on our exit plan, but we don’t have a future right now – everything is dark,” Draher said.

“You know what the official title of the case is? The US vs Gunnery Sergeant Danny Draher,” he added. “You’ve dedicated your entire adult life to protecting and serving the country, and now the government is coming after you for nothing. Think about that for a moment and the signal it sends to young people thinking of joining.

“Even if we’re acquitted—as we should be—our lives have already changed forever. There’s only going to be this stigma, like the MARSOC 7.”

This is a tragedy. An American died far from home, alone, without his loved ones. To wantonly destroy the lives and families of three other decorated Americans won’t bring him back.