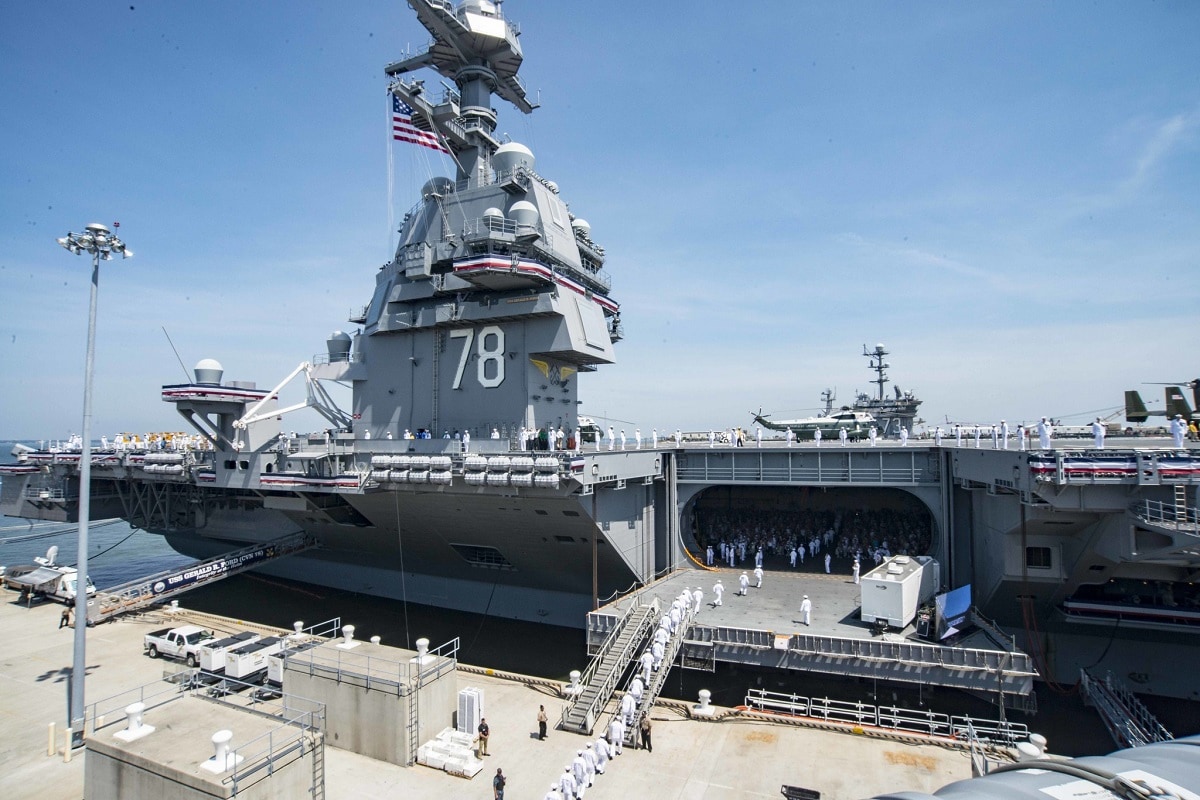 Today the chief of naval operations, Admiral Mike Gilday, released an updated “Navigation Plan” for 2022. In effect, the Navigation Plan represents Admiral Gilday’s instructions to the service on how to execute the Triservice Maritime Strategy (2020), along with higher-order directives such as the National Defense Strategy and the interim National Security Strategy. Several things are worthy of note in the Navigation Plan, some of them head-scratchers.

First, a head-scratcher. The Navigation Plan’s drafters make much of the concept of “integrated deterrence,” taking their cue from the Biden Pentagon. Integrated deterrence seems to mean using all levers of national might in concert with allies, friends, and partners to discourage misadventures on the part of the Chinas and Russias of the world. The document declares that integrated deterrence “leverages the Joint Force’s combined capabilities in all domains—in concert with our allies, partners, and the entire U.S. Government—to make the costs of aggression against our vital national interests prohibitive.”

Which raises the question, what has the U.S. foreign-policy apparatus been pursuing in the past? Disjointed deterrence?

If so, shame on us. Deterrence means impressing on potential malefactors that the United States has the capability to defeat or punish aggression and the willpower to deploy that capability under circumstances it says it will. That’s a grand-strategic endeavor, not a solely military one. Deterrence should always be integrated—and should always have been. In any event, the naval contributions to deterrence outlined by CNO Gilday are familiar ones, including undersea nuclear deterrence and a U.S. Navy-Marine Corps fleet able to prevail in conventional combat. He maintains that “our Navy must deploy forward and campaign with a ready, capable, combat-credible fleet.”

Indeed. But again, how Washington envisions coordinating the sea services’ efforts with other arms of national power in novel ways remains to be seen. Integrated deterrence sounds like old wine poured into a new bottle bearing a not-terribly-catchy new label.

Second, a hearty huzzah! goes out to the framers for pledging to husband a culture of humility and problem-solving in the service. They start by making the interesting claim that “over years of study, we have identified pockets of unacceptable variability in our performance,” meaning that “the gap between our best and worst performers is too great.” The Navigation Plan appears to conflate performance with adaptation, though, prophesying that “the navy which adapts, learns, and improves the fastest gains an enduring advantage.”

So steady-state performance doesn’t appear to be the chief worry. Gilday wants to raise the navy’s average performance in the realm of managing change.

And maybe that is the proper way to gauge how mariners acquit themselves in turbulent times. Seldom do things go well for either combatant at the outset of a clash of arms. The limits of foresight make it impossible to fully prepare a force to handle the rigors of warfare. The contender more dedicated to and proficient at self-betterment indeed amasses an advantage over a more lethargic foe.

To bolster the U.S. Navy’s agility the CNO prescribes a ”Get Real, Get Better call to action.” Getting real means navy leaders must be “honest, humble, and transparent” about their strengths and weaknesses, “challenge their beliefs” in Socratic fashion, and take pride in “finding and fixing problems” rather than downplaying them. Getting better means attacking problems early, while they remain minor, rather than letting them balloon into something major and systemic. The Navigation Plan proclaims that “a learning mindset is essential.”

Cultural stewardship is the foremost challenge of leadership in my view. An institution suffused with a thriving culture is well-positioned to get things like technology, tactics, and operations right; an institution beset by cultural malaise mishandles the finest implements handed to it by national leadership. How to instill a learning culture? The Navigation vows to do it through education, for one thing. But the second approach is the kicker: “We will also reform our talent management systems to incentivize Get Real, Get Better behaviors, rewarding leaders for the outcomes they achieve and the culture they create.”

People respond to incentives and disincentives. What types of incentives the leadership puts in place, and how—and how rigorously—it applies them will determine the future of cultural reform in the service.

Third, Admiral Gilday offers specific numbers. This week a team of Politico coauthors mocked navy grandees for being all over the place touting different figures for the future fleet inventory. They point out that estimates have ranged from 316 to 327 to 367 to 373 to 500, this year alone. Judging from the Navigation Plan, the leadership has alighted on the proper fleet size: “In the 2040s and beyond, we envision this hybrid fleet to require more than 350 manned ships, about 150 large unmanned surface and subsurface platforms, and approximately 3,000 aircraft.” (The Politico team may have neglected to count the uncrewed contingent while collecting various tallies.)

The CNO also broadcasts a warning about budgets: a bigger fleet will cost the taxpayers. “To simultaneously modernize and grow the capacity of our fleet,” he says, “the Navy will require 3-5% sustained budget growth above actual inflation. Short of that, we will prioritize modernization over preserving force structure.”

Forced to choose, in other words, the Navy Department prefers a smaller but well-maintained force to a bigger but ill-maintained one. This is a lesson from the hollow navy of the 1970s. Having settled on specific figures, one hopes the navy leadership will stick to them. Five hundred is a nice round number with lots of zeroes in it, and has that sort of mystic appeal that made the campaign for a 600-ship navy go during the 1980s. The 500-ship navy makes a better banner to rally behind than a figure that’s seemingly more precise.

Fourth, and here’s another head-scratcher, the Navigation Plan hints that dissent over the design of the future fleet lingers between U.S. Navy and Marine leaders. The document presents desired numbers of hulls for each category of vessel. When it comes to amphibious warships it sets a goal of thirty-one large transports, which codifies the agreed-upon figure for both sea services. But it envisions a flotilla of just eighteen light amphibious warships, while the Marine Corps wants thirty-five—almost double the Navy’s number.

That’s a significant disparity in operational and strategic terms. Marines have premised their “expeditionary advanced base operations” operational concept on acquiring light amphibious warships in bulk to move missile-armed marine littoral regiments from island to island in China’s (or other nemeses’) backyards. Regiments will flit from island to island on reconnaissance and counter-reconnaissance missions while walloping hostile ships and planes when the opportunity presents.

It sounds as though the navy is capping the marines’ future operations by declining to furnish them adequate sealift. Now it’s up to sea-service leaders to reconcile their differences on the numbers and ship types comprising the gator navy.

So there’s a quick look from your humble scribe at the CNO Navigation Plan for 2022. It dispenses solid guidance—now, let’s see how well the service executes it.