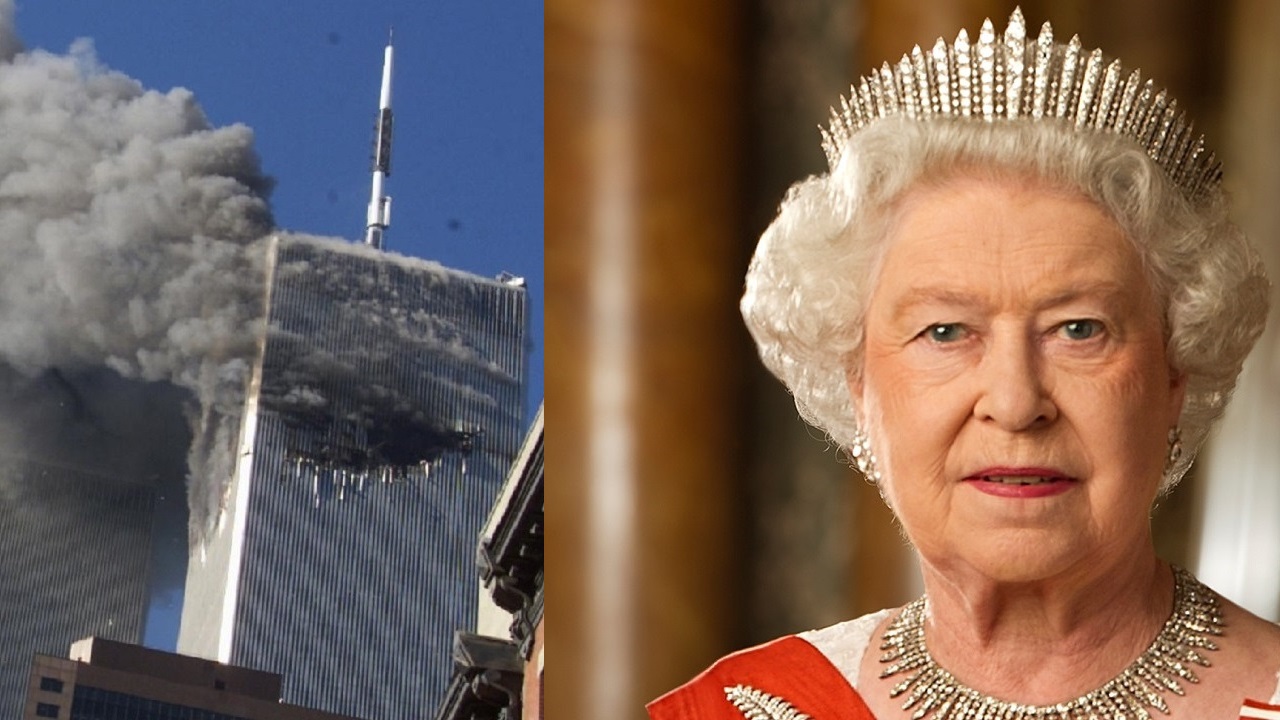 9/11 and Queen Elizabeth II. Image Credit: Both Imaged are Combined and are Both Creative Commons.

The proximity of Queen Elizabeth II’s death to the 21st anniversary of the 9/11 terrorist attacks on the United States is a stark reminder that Western societies often seem to be capable of unity today only in the face of overwhelming tragedy.

Sometimes, that isn’t even enough.

One of the most enduring memories of 9/11 for this writer was the Queen Elizabeth  ordering that the “Star Spangled Banner” be played outside Buckingham Palace as a show of support in the days following the attacks. The Coldstream Guards Band performed as stranded Americans, some waving flags and others wiping away tears, looked on.

The airplanes crashing into the Pentagon and collapsing the World Trade Center reminded a diverse group of people — and a nontrivial number of residents of foreign lands — that they were united in the need for physical safety and survival against common enemies.

But the loss of a national symbol, even one as human, constant and ubiquitous as the queen, presents a different challenge. The New York Times likened the resulting identity crisis to “a rupture to the national psyche.”

You can band together more easily to ward off outside attackers than you can replace “the mystic chords of memory” that bound you together in the first place.

In the aftermath of Queen Elizabeth’s death, some were eager to dance on her grave as a way of seeking vengeance for colonialism, imperialism, monarchism, racism, and the sun once never setting on the British Empire. And over the course of history, there is much to answer for.

But to ignore the positive side of the ledger raises severe moral failings in its own right, of the type necessary to overlook the mulitracial societies of the far-flung British Commonwealth and advances in human liberty. Without such myopia, it becomes difficult to wish an “excruciating” death on a little old lady presiding over the most benign period of the monarchy.

One can write from the American tradition of “a republic, not an empire” (or monarchy) and still see the good in what the British risk losing, and the hate animating the self-styled enemies of hatred cheering its demise.

Such sentiments were heard in America following 9/11 as well, but the trauma of this act of mass murder was so great that even the forerunners of today’s woke were relatively circumspect about their expression. Still, it has in more recent years become fashionable within the educational establishment and elsewhere to speak as if America is defined only by its worst acts and traditions, a force for evil that can only be redeemed (if at all) by empowering those who think along these lines or are willing to pretend to for adequate consulting fees to remake the country’s economy and institutions.

The sense of national unity that came after the 9/11 atrocities had largely dissipated within three years. Can the unity in the streets of London be counted on to last three weeks after Queen Elizabeth’s state funeral?

Countries need to believe in themselves, their people, and their systems without engaging in denial about the real sins, including slavery and racism, in their past. What we would consider a psychologically healthy approach to an individual person dealing with their self-worth in the face of undeniable human imperfections is important to a healthy national identity as well.

The outpouring of grief following the death of the queen abroad, and in the remembrance of nearly 3,000 murdered during acts of terrorism inflicted on the American homeland, reminds us of these identities. Instead of state worship, they are the product of real communities and natural human loyalties. Those who would demean those loyalties and identities are missing quite a lot, not only about the genuine, nuanced history of the West but also the human condition itself.

We cannot, at the national level, become like that lost elderly person who, because of dementia or Alzheimer’s, has no recollection of who they really are. That means recovering and preserving real memories, not trying to combat things like critical race theory with uncritical historical assessments.

If we can succeed at this difficult task, it may soon be possible for people in America and the UK alike to remember what binds them together as people in the absence of traumatizing national tragedies.