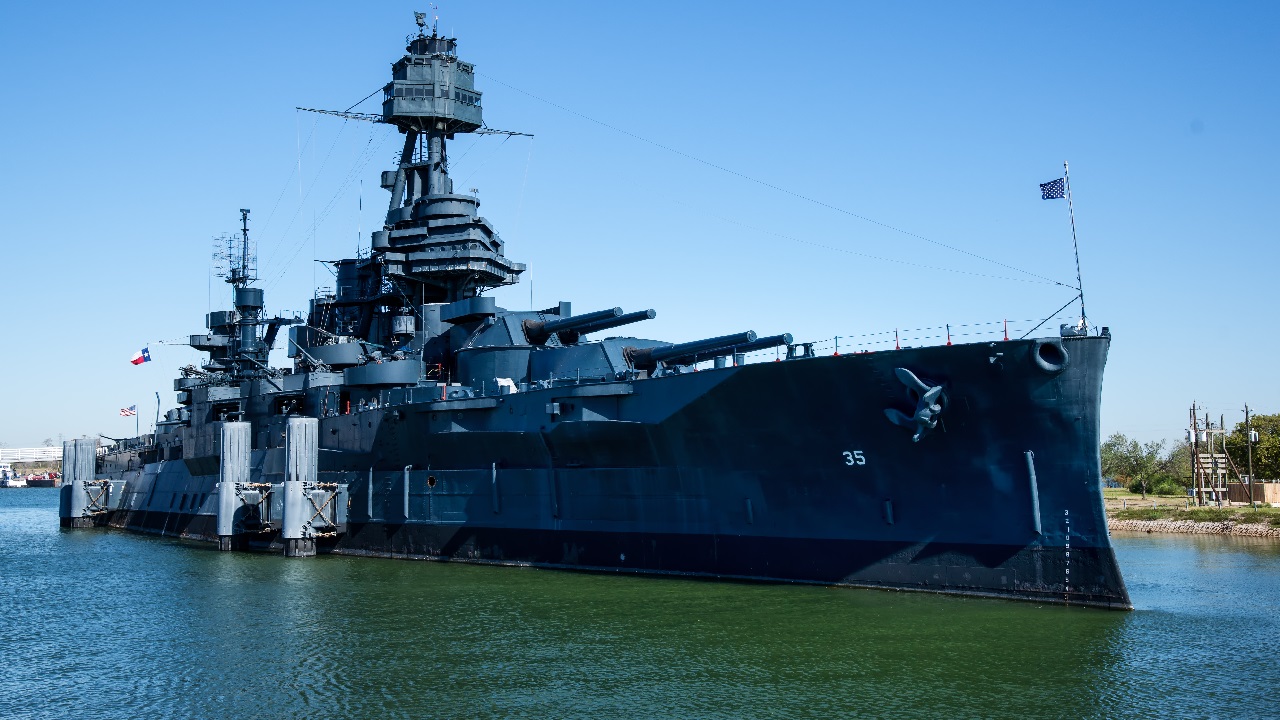 USS Battleship Texas Dry Dock Tours to Continue: As repairs continue on the USS Texas (BB-35), visitors will still have an opportunity through the end of April to get a special tour of the vessel while it is in dry dock.

It is likely the only opportunity most will have to be able to walk around any battleship while it is out of the water.

It won’t be the only opportunity this winter to see some parts of the hull.

Earlier this month, the Jay and Kay Eshbach Foundation lent 108-year-old pieces of the battleship’s hull to the Baytown Sun and Texas First Bank in Baytown where it will be on display through the middle of February.

It is now presented with a model of the only surviving battleship to see service in both World Wars and highlights how the old battlewagon looked when she entered service in 1915.

Eshbach is the chair of the Bring the Battleship to Baytown Committee, a group attempting to have the historic ship brought to Bayland Island after it completes the restoration work in Galveston.

The efforts to preserve the ship began in earnest last summer after USS Texas was towed out of her berth to a floating dry dock at Gulf Cooper Dock & Rig Repair.

The journey took four tugboats pulling the ship 40 miles through the Houston Ship Channel. This is the first major restoration since the ship was sent to drydock from 1988 to 1990.

In 1948, after seeing service in both World Wars – USS Texas became the first of the eight United States Navy battleships that have been transformed into a permanent floating museum – and she is also the oldest surviving modern naval warship, having turned 100 years old in March 2014.

Apart from the time spent in drydock during the last restoration effort, USS Texas has called the Houston Ship Channel near the San Jacinto Monument at San Jacinto State Park home – the location where Texian troops led by Gen. Sam Houston surprised and quickly defeated the Mexican Army in 1836.

When the repairs are completed, the ship will head to a different permanent home. Baytown, Galveston, and Beaumont have all expressed interest in hosting the vessel. Many veterans have championed Galveston as it was the original home of the Texas Navy dating back to the era of the Texas Republic – and USS Texas is still its honorary “flagship.” Galveston’s Pelican Island is also home to Seawolf Park, which has the World War II submarine USS Cavalla and one of only three destroyer escorts in the world, the USS Stewart, on display.

Baytown Ready to Fight for BB-35

Officials in Baytown are ready to put up a serious fight for the ship as well, and it was a year ago that Mayor Brandon Capetillo first petitioned the Battleship Texas Foundation to consider the city as a future home.

This would include docking the historic vessel next to the Hyatt Regency Hotel and Convention Center being constructed on Bayland Island.

The Foundation has also loaned the  Baytown Historical Museum a number of USS Texas artifacts, including signal flags, a life preserver, headphones, and communication equipment.

However, the biggest issue could be the costs, as city officials have noted that dredging around Bayland Island could cost somewhere between $30 million and $40 million.

For now, the focus remains on ensuring that the warship will be ready to move to her eventual new home – wherever that will be.