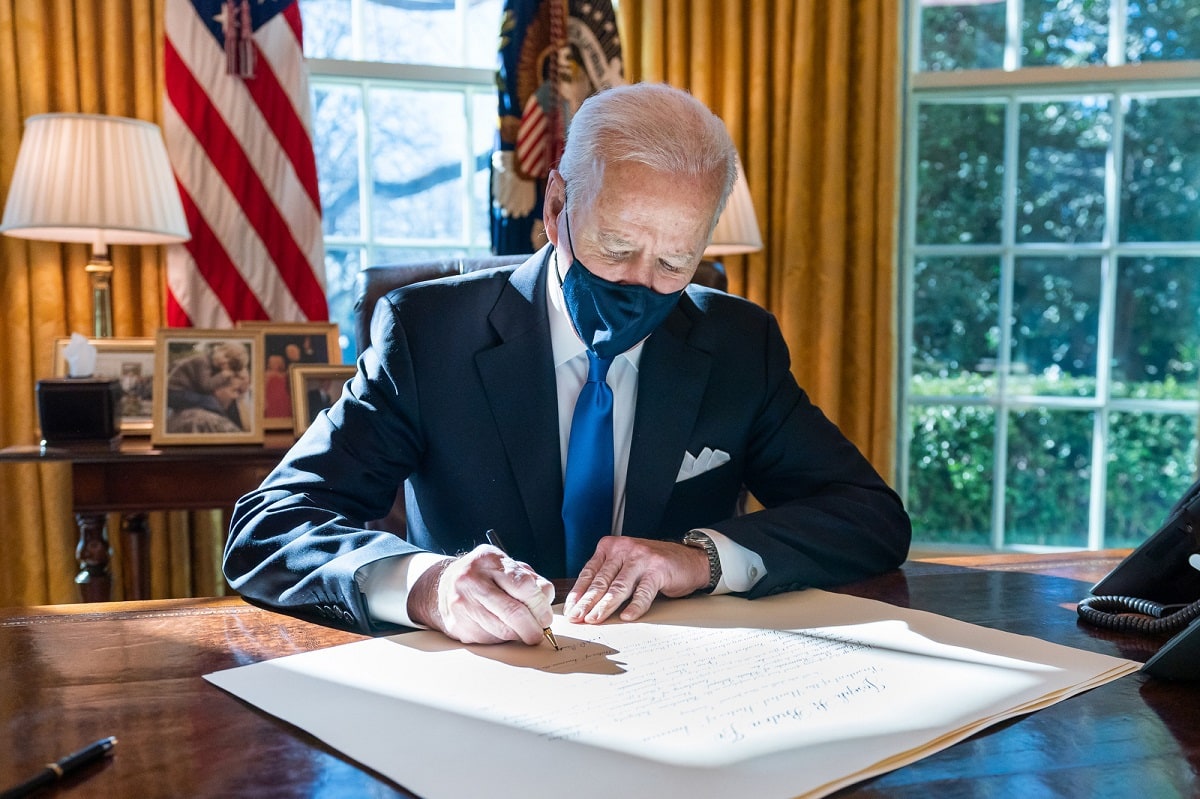 President Joe Biden signs a commission for Gina Raimondo as Secretary of Commerce Wednesday, March 3, 2021, in the Oval Office of the White House. (Official White House Photo by Adam Schultz)

Former National Security Advisor H.R. McMaster wrote on Monday that President Joe Biden should not withdraw from Afghanistan by May 1, as the deal negotiated by the Trump Administration in February 2020 requires. The arguments McMaster provides to justify the continuation of the war, however, ironically do more to support a decision for withdrawal.

As many advocates of forever-war do, McMaster provides skewed representations of the arguments for full withdrawal. In a Monday editorial  for Fox News opinion, McMaster inaccurately accused those who advocate for a full withdrawal of basing their policies on a belief that “the Taliban has become less murderous and is disconnected from other terrorist organizations.”

No credible advocate for keeping to the May 1 withdrawal schedule has so much as implied the Taliban are “less murderous” and have often expressly stated – as I have – that we should in no way trust our security to the word of the Taliban that they won’t work with other terrorist organizations in the future. The argument that we do make, is this:

Continuing to fight a perpetually failing war is unnecessary, costly, and counterproductive for our national security. We will continue to keep America safe from terrorist attacks with our global intelligence, reconnaissance, and surveillance network and powerful ability to strike direct threats to our security (known as “ISR-Strike”), no matter where in the world such threats arise.

What I personally observed from traveling thousands of miles within Afghanistan, especially during my second combat deployment there in 2010-11, is that having a mere handful of troops on the ground in Afghanistan in no way “prevents” the Taliban from doing anything. What does keep us safe, right now, is our ISR-Strike capability.

McMaster argues, after 20 years of failed war, that the Biden Administration should engage in a new, “sustainable long-term strategy based on what the situation demands and what the American people will support rather than wishful thinking.” Yet, after correctly eschewing “wishful thinking” as a basis for strategy, he argues for something nearly the epitome of wishful thinking: predicating his plan’s chances of success on convincing “reconcilable elements of the Taliban that they cannot prevail through the use of force.”

On the surface that would seem a curiously un-realistic objective upon which to base ultimate success, especially given that the Taliban is in its strongest position since 2001. We don’t have to waste yet more years to find out whether that objective would work or not, however, as it’s already been tried – and proved to have utterly failed.

In 2009, Ashley J. Tellis, the Chair for Strategic Affairs at the Carnegie Endowment for International Peace, wrote an analysis of a then-emerging idea of how the war might come to an end. “Reconciling with the Taliban is a deceptively beguiling strategy for pacifying Afghanistan,” he wrote, “and one that is doomed to fail presently.” Even trying to reconcile, he darkly warned, “could lead to a perverse set of consequences” in which a “Western defeat was imminent.” His words proved prescient.

The next year, NATO ignored Tellis’ warnings and established the Afghanistan Peace and Reintegration Program (APRP), which sought to reconcile the Taliban and the government. The program ran for six years before it was disbanded.

In 2019 the Special Inspector General for Afghanistan Reconstruction (SIGAR) published an assessment of the APRP which concluded that, “U.S. and Afghan governments and the UN have all acknowledged that APRP was largely ineffective and possibly counterproductive.” Advocating an extension of the war into literal perpetuity on the basis of hope that re-trying a strategy that failed over six years will somehow work this time is not a basis for sound policy.

What is optimal policy – given the realities on the ground in Afghanistan – is to stick to the May 1 withdrawal date. Bonnie Kristian, writing in USA Today on Tuesday, warns that abrogating the deal could allow the Taliban to, “justify more violence, chaos and perhaps even total rejection of diplomacy.” If the U.S. and Taliban start openly fighting each other again, the risk increases greatly that the war will expand in the coming months, not come to a close.

In that case, Kristian added, it would be “no exaggeration to say canceling this deadline could lead to a U.S. presence in Afghanistan essentially unchanged (or even expanded) by the end of Biden’s term.” That’s a risk Biden and the United States simply cannot take.

We are at the 20-year mark of combat failure precisely because none of the previous three presidents would acknowledge the unpleasant realities on the ground that the war can never be won. If Biden doesn’t want to hand the same problem off to the next president, he must show the courage and resolution none of his predecessors did and end the war, on schedule, on May 1.