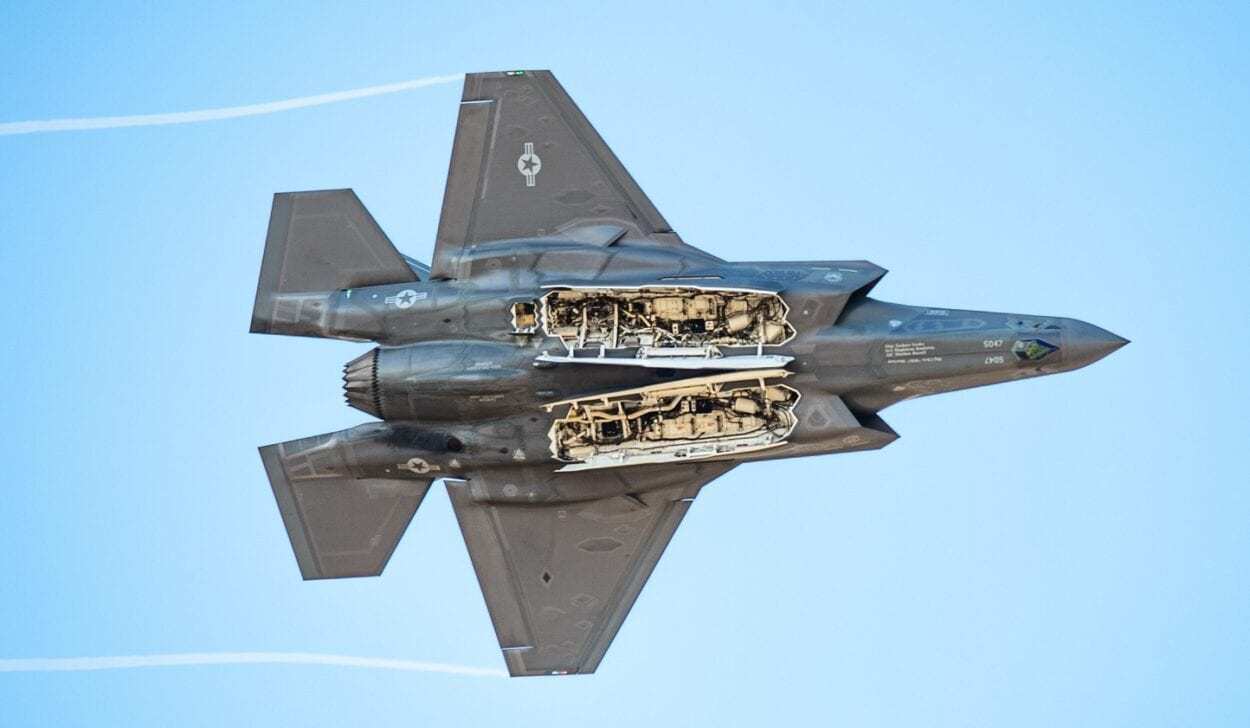 Capt. Andrew “Dojo” Olson, F-35 Demonstration Team pilot and commander performs a weapons bay doors pass during an F-35 Demo practice at Luke Air Force Base, Ariz., Jan. 16, 2019. Throughout the off-season, the F-35 Demo Team has been practicing and refining their new demonstration.

America’s 5th generation, multi-role stealth fighter, the F-35, has continued rolling off the production lines despite the COVID pandemic. That’s been an unheralded – but significant – national security and manufacturing success story during the pandemic.

But it’s easy to miss that news, given breathless, factually-bereft stories calling the F-35 a “failure” that get passed around on social media.

One item often cited by F-35 critics is the Pentagon’s delay in certifying the Joint Strike Fighter for “full-rate production.”

The COVID-19 pandemic has delayed everything under the sun and imposed incredibly onerous conditions on manufacturing. Yet, the F-35 supply chain workers successfully mounted a Herculean effort last year to produce 120 fighters to supply both the United States and its allies and partners with next-generation airpower.

COVID has also taken a toll on readying a U.S. government-run program known as the Joint Simulation Environment or JSE. In the simplest terms, the JSE is a computer program that simulates advanced threats that cannot replicate live flight tests.

The challenge for the Pentagon’s team has been getting the computer simulation to integrate the F-35 – a complex project that COVID hasn’t made any easier. Back in August 2020, Ellen Lord, the Under Secretary of Defense for Acquisition and Sustainment, attributed “setbacks within the JSE from COVID” due to the changes in the work environment required by the Centers for Disease Control guidelines for safe working conditions. Until the JSE program is up and running and the F35 has been integrated into the simulation, “full-rate production” cannot be declared.

In essence, the postponement of “full-rate production” designation has been caused by the lack of JSE integration and should not be taken as a negative reflection on the F-35’s capabilities – or the ability of the U.S. and our allies to purchase the next-generation platform at current rates.  In fact, the Office of the Secretary of Defense has stated unequivocally, “The delay in approving Full-Rate Production does not affect planned production of F-35 aircraft for U.S. Services and international partners.”

Indeed, the F-35 is still, in the words of the F-35 Joint Program Office, “the premier air system of choice” for the U.S. and international customers, who will experience no change to currently approved delivery schedules and production milestones due to the Full-Rate Production designation delay.

Or, as Air Force Chief of Staff Gen. Charles Q. Brown recently stated, “the F-35 is the cornerstone of the U.S. Air Force fighter fleet.”

The actions of the F-35 back up those words. For nearly 18 continuous months, Hill Air Force Base deployed the F-35 to the Middle East, conducting hundreds of combat missions and returning safely. F-35s are proving themselves in exercises from the Arctic Circle to Guam.

Our allies see the value of the F-35. NATO ally Denmark is in the process of receiving its first F-35. An Italian aircraft carrier is undergoing qualifying trials to carry F-35s, with American and British pilots landing U.S. jets on the Italian ship.

This year will see further deployments of F-35s by the United States and our allies and partners. These aircraft are forward-deployed, providing significant conventional deterrence to rivals like Russia and China, and binding our alliances together.

The key performance indicators to watch now are the number of aircraft rolling off the assembly lines and the growing number of combat-ready squadrons America and its allies are able to deploy.

When it comes to measuring the progress of the F-35 program, those are the key and meaningful metrics that matter.

General William R. Looney III, USAF (Ret.) was the 28th Commander of the Air Education and Training Command, Randolph Air Force Base, Texas. He is a retired combat and command pilot with more than 4,000 flying hours. He is currently a consultant for a number of defense companies, including Lockheed Martin.

General William R. Looney III, USAF (Ret.) was the 28th Commander of the Air Education and Training Command, Randolph Air Force Base, Texas. He is a retired combat and command pilot with more than 4,000 flying hours. He is currently a consultant for a number of defense companies, including Lockheed Martin.