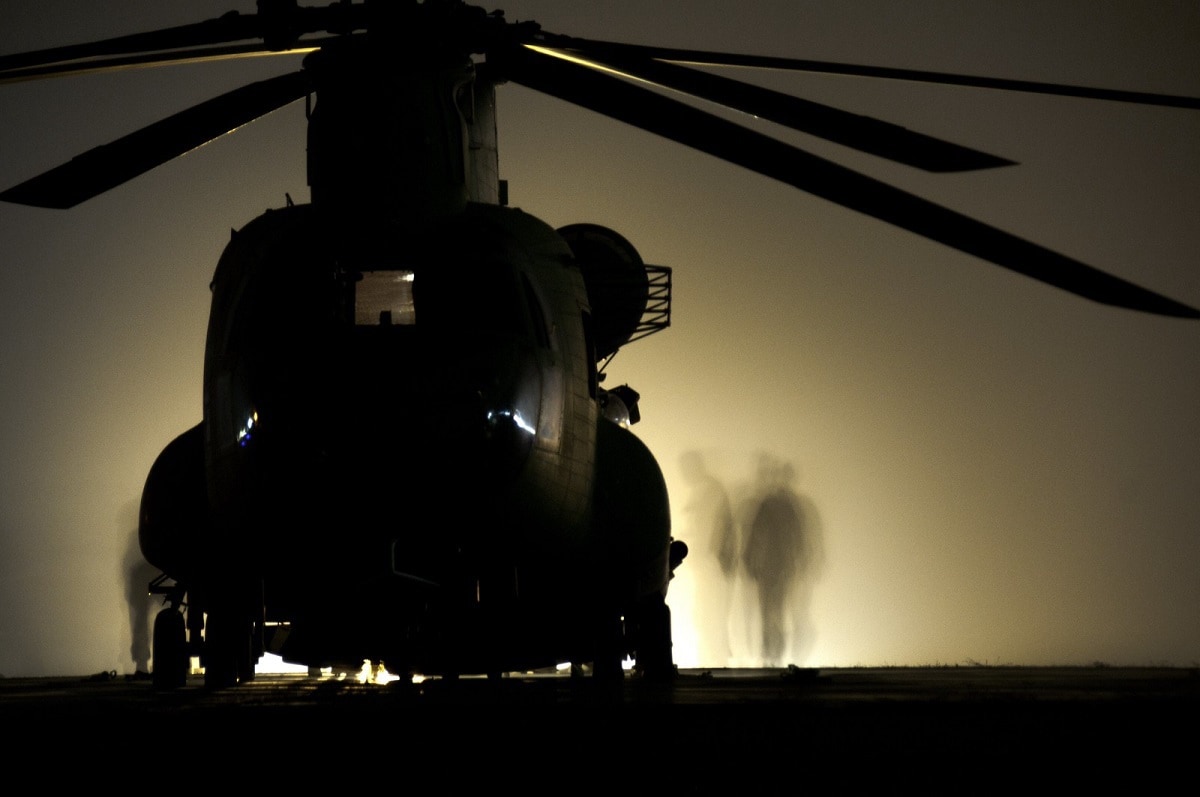 Crew members prepare the CH-47F Chinook heavy-lift helicopter before conducting the night portion of the sling load training with the 1569th Transportation Company. The instructors were members of the crew team and would lead the Soldiers to the equipment that was ready to be hooked up to the Chinook. (Photo by Sgt. Michael K. Selvage, 10th Sustainment Brigade Public Affairs NCO)

In President Biden’s first press conference, he was asked about Afghanistan and on this subject, two aspects of his answers stood out. The first was that he was noncommittal about adhering to the May 1 withdrawal deadline—but also said, with a noted degree of certainty, that he could “not picture” U.S. troops being in Afghanistan next year.

On Tuesday, we received news that retrospectively clarifies these comments. The May 1 deadline will be disregarded, but a new deadline of September 11, 2021, has been set for a full withdrawal of U.S. forces from Afghanistan. Before celebrating the long-overdue end of America’s longest war, however, there are a number of details that should be kept in mind.

First, missing the May 1 withdrawal deadline is not ideal. The agreement stipulating withdrawal by May 1 was the product of negotiations and there is a slight chance the Taliban will be more than a little unappreciative of the U.S. unilaterally deciding to break the agreement and extend the stay of U.S. troops.

This is not to say there will be a guaranteed attack on U.S. forces as they pull out of Afghanistan. If anything, the Taliban want U.S. forces gone, and seeing the U.S. take real, tangible steps to put withdrawal in motion might very well be enough to showcase the U.S. commitment to finally leave.

Still, much risk could have been avoided by the U.S. sticking to the original withdrawal deadline—something it was always possible for the Biden administration to do, despite their protestations about logistics. The U.S. should have ideally withdrawn immediately after toppling the Taliban government and punishing Al-Qaeda in the opening months of the war, but Biden inherited a deadline and it would have been more prudent to stick to it, rather than becoming yet another president who extended the U.S. stay in Afghanistan.

Second, “all U.S. troops” should mean just that—the American people want an end to our military involvement in Afghanistan, not a smoke and mirrors show where combat forces are separated from special operations forces and the American people are told that the latter must stay to conduct counterterrorism. Any permanent U.S. military presence in Afghanistan beyond the grounds of the U.S. embassy in Kabul is a continuation of this (thus far) endless war.

Skepticism is appropriate here given a general lack of transparency surrounding U.S. military operations, as seen in recent reporting that the U.S. actually has about 1,000 more troops in Afghanistan than officially admitted. Further, this concern is warranted because in statements after The Washington Post originally reported the U.S. would withdraw forces by September, an unnamed “senior administration official” said, “we will reposition our counterterrorism capabilities, retaining significant assets in the region to counter the potential reemergence of a terrorist threat to the homeland from Afghanistan,” which raises a number of urgent questions.

How is “the region” defined? After all, the U.S. has no on-the-books bases in any countries neighboring Afghanistan so would the “significant assets” be stationed in the Gulf countries? Or would there be a regular offshore carrier presence in the Indian Ocean? Would this be a permanent presence? To what extent does the Biden administration view this as necessary for U.S. security and just how many personnel would be detailed to this assignment?

Twenty years after 9/11, our intelligence, surveillance, and reconnaissance abilities are unmatched and we should rest easy knowing America’s reach is long, efficient, and—if it need be—deadly. The Taliban have surely learned their lesson and will no longer tolerate Afghan territory being used as a haven for transnational terrorists. And if they forget the lesson, the U.S. can always conduct surgical strikes and raids against any legitimate threats to American security. But these operations will not require the permanent presence of U.S. troops.

Finally, even if all U.S. forces are indeed withdrawn from Afghanistan come September 11, we must remember that the era of endless wars is one we still live in. The same fundamental problem of employing U.S. military power for objectives the U.S. can’t possibly achieve at an acceptable cost will remain, especially in Iraq and Syria—but with the added ‘perk’ of these conflicts inviting further escalation with powers including Iran and Russia.

There is also the risk that ending U.S. involvement in Afghanistan could be used as an excuse to escalate the already-ramped-up pressure against China or Russia, sold under the all-too-ubiquitous term great power competition. In brief, ending one war should not mean Washington can now redirect those energies toward another theater.

2021 is not 2001 and the American appetite for war has eaten more than its fill. This is a time to focus on remedying domestic troubles and revisiting the fundamental foreign policy assumptions that got the U.S. into such a precarious and overstretched situation in the first place—and how we can rework our thinking about America’s place in the world so that we can avoid future disasters.

September 11 is a day that bears symbolic significance and perhaps the emotional connotations of the date will actually work as a useful force incentivizing the Biden administration to fulfill its withdrawal plan without any further delays. But beyond any meaningful or branding power of leaving Afghanistan by the 20th anniversary of 9/11, it is also critical that the American people hold the Biden administration to a full withdrawal by this date and not let up until Washington finally stops creating Afghanistan veterans.

Michael Hall is the Communications Director for Defense Priorities and an Associate Editor for 1945.