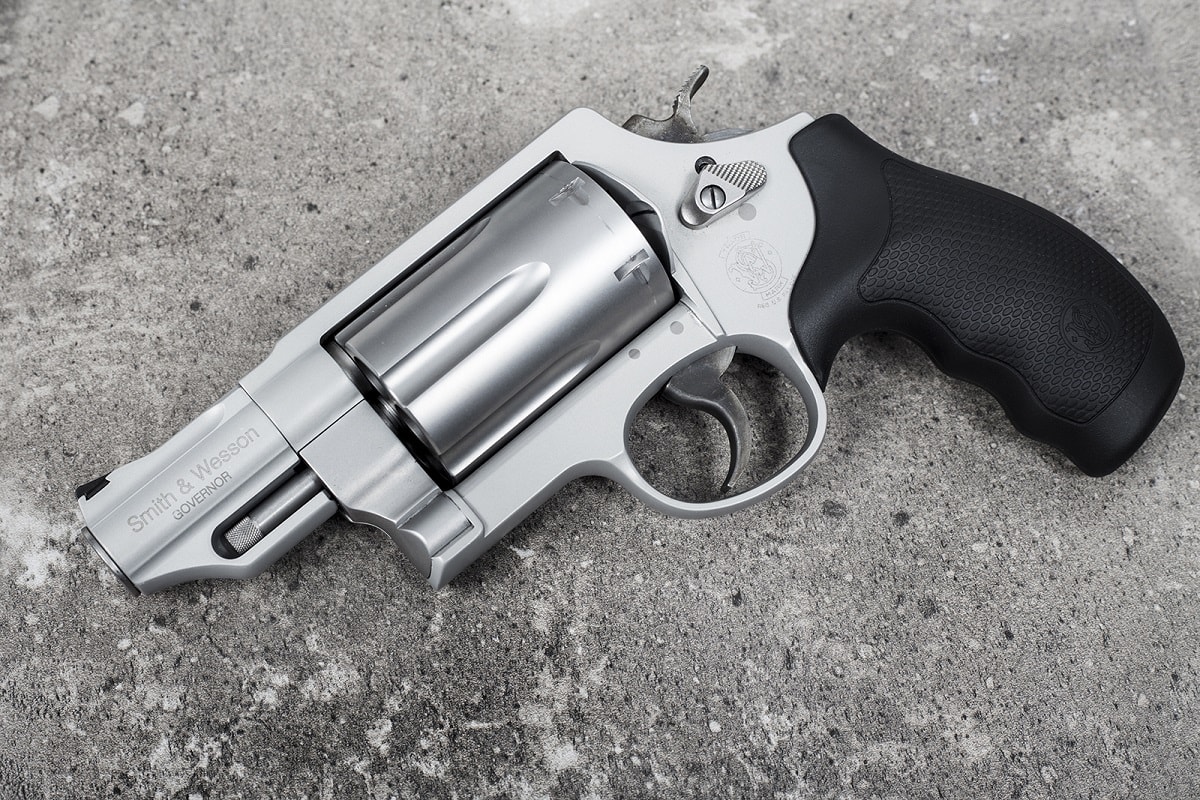 The Smith & Wesson Governor is the perfect six-round revolver for home defense and survival shooting.

You have two different low-profile front sight options when choosing your Governor model: a black ramp sight or a dovetailed night sight. The rear sight, a no-snag notch, is the same on both. The model with the night sight features a stainless PVD cylinder, while the other model is made of stainless steel. Both feature a rifled, stainless steel barrel and a scandium alloy frame.

The cylinder locks into the frame with a standard release latch on the rear, but a unique feature is a spring-loaded ball bearing at the front of the cylinder crane. This locks into the bottom of the ejector shroud, which is different from the spring-loaded plunger that most Smith & Wesson revolvers use. In my opinion, this design is superior. It’s much easier to punch outspent cases!

The trigger is much better than on most other S&W revolvers, as well! It’s a single/double action and breaks at around 4.5 lbs in single action. In double-action, it breaks somewhere between 10-11 lbs. No matter how you pull the trigger, it’s smooth, crisp, and consistent each time.

Although the Governor only weighs about 30 oz, recoil is not overwhelming. The synthetic grip aids in this, as it gives you enough room to get a full three-finger grip, and helps with the revolver’s overall balance. .45 Colt rounds will have the most kick, but even without a recoil spring, it’s still manageable.

Smith & Wesson includes two full moon clips and three 2-shot moon clips with the Governor, which you’ll need to use if you’re shooting .45 ACP loads. The full moon clips let you reload the quickest, and all the loads I’ve used have ejected very well with minimal punching. The cylinder does have a raised rim around it, so make sure not to use any half-moon clips! This could easily cause a jam.

Moving on to accuracy, it’s pretty good for a snubnose revolver. It’s definitely more accurate from shorter distances, and I’ve found that I have the best accuracy using .45 Colt rounds. From 15 yards, it’s easy to get 3” groups or less.

The Governor MSRPs for $825, and $885 if you go with the dovetailed night sight. You can probably find it cheaper at some retailers, but it’s an overall good value for a well-balanced, high-quality revolver made by one of the most reputable gun manufacturers.

Because it’s 8.5” long with a 1.75” diameter cylinder, I wouldn’t recommend using the Governor for concealed carry purposes. It is smaller than other similar revolvers, like the Taurus 608, but still not small enough to easily conceal. However, it is excellent for defense purposes, like home or predator defense, or for target shooting at the range! It won’t do the same job as a semi-automatic rifle, but it should be enough to deter any intruders.