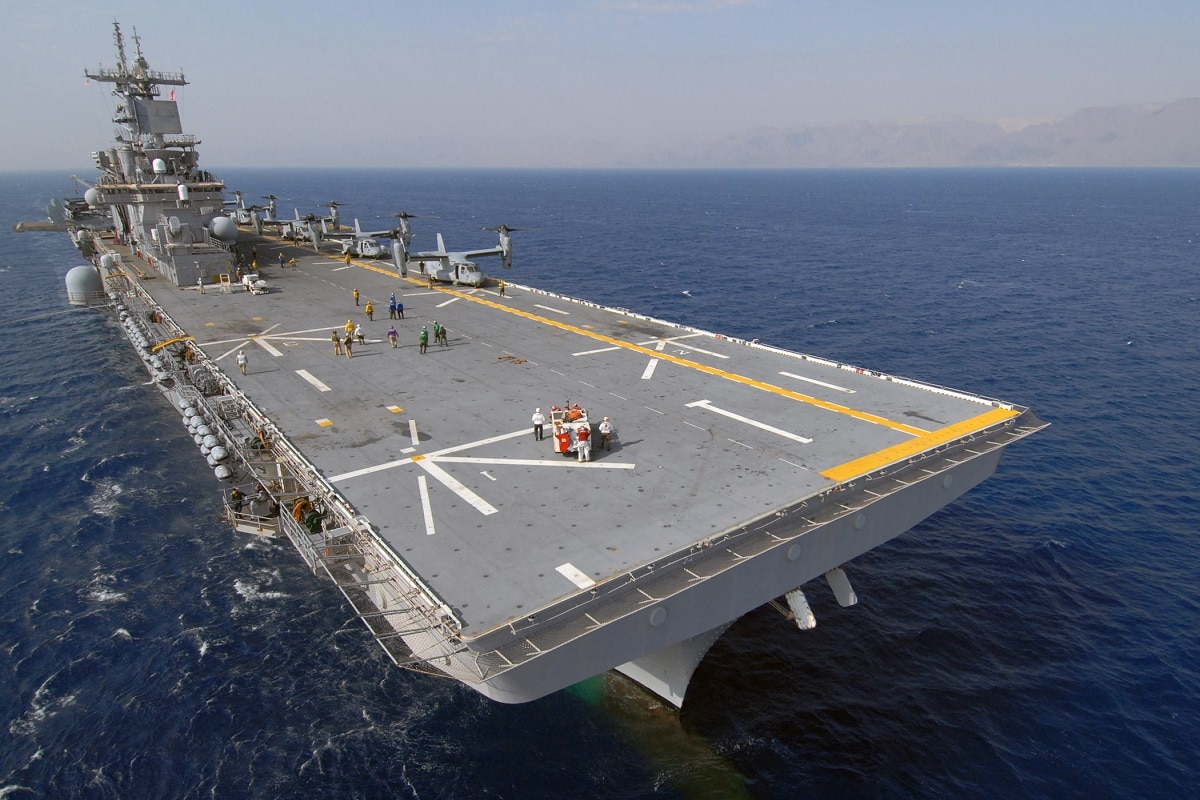 From a distance, it would be easy to mistake the U.S. Navy’s USS Wasp (LHD-1) and her six sister vessels as “aircraft carriers.” While actually larger in size than the aircraft carriers operated by several nations, the United States Navy has relied on these “amphibious assault ships” as part of its efforts to conduct maritime security operations to promote peace and stability in neutral waters around the world.

The multipurpose warships were born of the Tarawa-class Landing Helicopter Assault (LHA), which was built in the 1970s and early 1980s, and featured significant modifications to operate more advanced aircraft and landing craft. While the Wasp-class maintains a “landing helicopter dock” designation, these are officially known as amphibious assault ships as they carry almost a full strength of a United States Marine Corps Marine Expeditionary Unit (MEU) and transport them into hostile territory via landing craft or helicopters. Additionally, the LHDs can provide air support from short /vertical takeoff and landing (S/VTOL) aircraft such as the AV-8B Harrier II attack aircraft or the F-35B Lightning II stealth fighter jet.

At 844 feet long with a beam of 106 feet, the Wasp-class is essentially a floating military base. There are six cargo elevators to move material and supplies form the cargo holds, as well as two aircraft elevators. The LHDs can carry three Landing Craft Air Cushion, a dozen Landing Craft Mechanized or upwards of forty Amphibious Assault Vehicles. The flight deck features nine helicopter landing spots.

In addition to a crew of some 1,075 sailors, the LHDs can carry upwards of embarked troops. However, unlike the troop transports from the early 20th century, which were essentially floating cattle cars, the Wasp offers reasonable accommodations for those onboard. All manned spaces and berthing areas, which are subdivided to provide semi-private spaces without adversely impacting efficiency, are individually heated and air-conditioned. While the warships would never be confused with a luxury cruise ship, there are multiple amenities that include a state-of-the-art Library Multi-Media Resource Center with Internet access, weight room, arcade machines, and even satellite TV capabilities.

A Jack Of All Trades

The ships offer medical and dental capabilities and can provide medical treatment for up to 600 casualties. There are six operating rooms including four main and two emergency rooms; four dental operating rooms; x-ray rooms; a blood bank; and patient wards with sixty-four patient beds. An additional 526 beds can also be set up in an Overflow Casualty Ward. The vessels are fitted with medical elevators that can provide the rapid transfer of casualties from the flight deck and hanger bay.

At the time of their introduction, these were the largest amphibious assault vessels in the world, and even now only the newer America-class LHDs are larger. The lead ship of the class entered service in 1989 and seven additional Wasp-class warships were produced. However, the USS Bonhomme Richard (LHD-6), which entered service in 1998, was seriously damaged in a fire that broke out when she was undergoing a refit. The navy decommissioned LHD-6 in April.

All of the Wasp-class LHDs, except USS Mankin Island (LHD-8), are powered by two steam propulsion plants, which are the largest currently in operation in the U.S. Navy. LHD-8, which was the last of the class to be built, is the only one powered by LM 2500+ Gas Turbine Engines and Electric Drive.