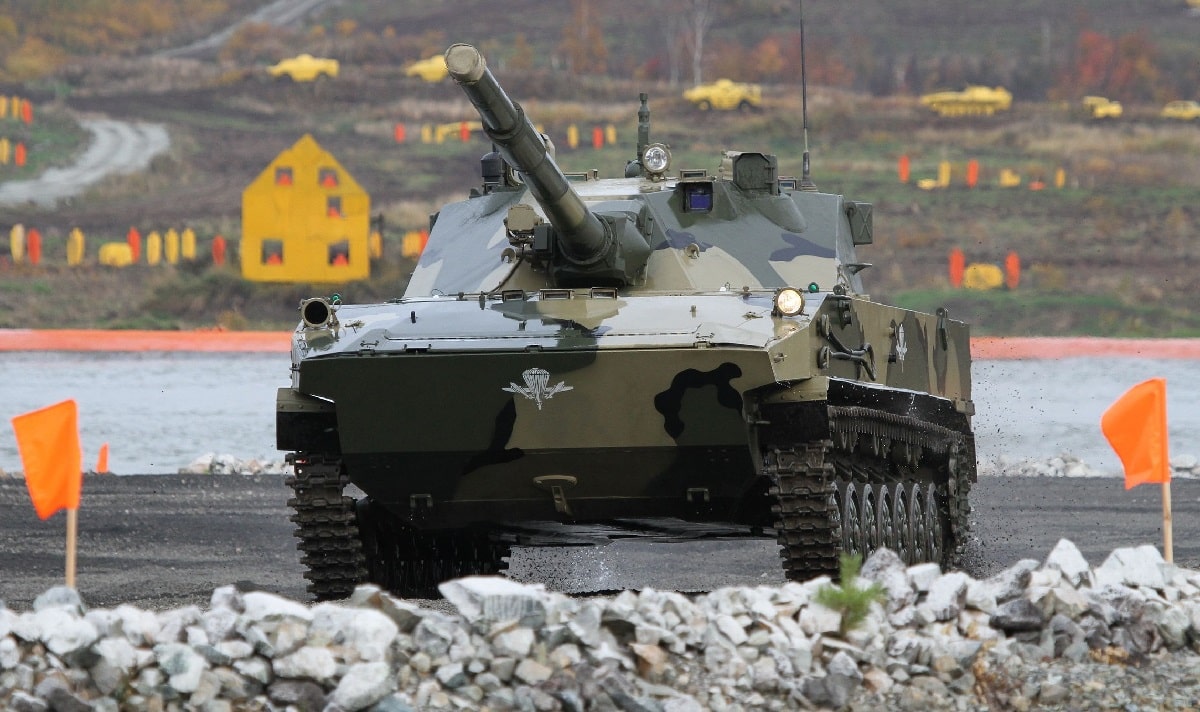 As of September 2013, the only operators of the 2S25 are the Russian airborne troops. Image Credit Vitaly Kuzmin.

Last fall and into the winter in the mountainous region of the Ladakh Valley, India’s military faced off with China as both sides moved in large numbers of armored vehicles. The Indian Army had deployed many of its aging T-72 and T-80 tanks, along with BMP-2 armored personnel carriers (APCs), all of which had been modified and adapted to run on a special fuel mix designed specifically for the high altitudes and low temperatures of the region.

The Chinese People’s Liberation Army (PLA) countered by deploying its own armored vehicles, notably the new Type 15 tank that had only made its debut in 2019. The Type 15 lightweight tank has thinner armor and a smaller 105mm main gun, but it was considered more suitable for operations in the mountainous terrain of the Ladakh Valley.

That move by China could now explain why India reportedly has its sights set on the Russian-made Sprut-SDM1 light tanks, which are set to take part in trials starting late this summer. According to a report in the Indian-based The Print, this will be the first time that any country has been invited to witness the trials of Russian-made military hardware that is still under development.

The news outlet cited sources in the Indian security and defense sector, and reported that New Delhi is keen on the 18-tonne Sprut because it shares the same main gun as the T-90 tank and thus fires the same ammunition. In addition to the T-72s and T-80s in the Indian arsenal, the Indian Army also operates numerous T-90s in its sizeable tank force. The commonality of the weapon systems on the Sprut and T-90 – as well as other Russian-built tanks – could help with logistics, while the maintenance systems of the Sprut wouldn’t be vastly different from the other Russian tanks current in use.

The Sprut has other advantages that could make it ideally suited to operations in India’s rugged frontiers. The light tank can be airlifted or even deployed by parachute with the crew inside, while it is also amphibious as well.

Russia may also be as keen to line up foreign customers, and Moscow’s approval to include India representatives in the trails of the Sprut reportedly came after India’s Defence Minister Rajnath Singh spoke about his nation’s need for a light tank during his visit to Russia in August 2020. During the visit, Moscow offer New Delhi the Sprut-SDM1 to bolster the Indian tank force.

The 2S25M Sprut SDM1 airborne light tank is a modernized version of the previous Sprut-SD. According to Military-Today.com, it is unified with the chassis of the new BMD-4M airborne combat vehicle and even utilizes some of the fire control elements of the T-90MS. The Sprut-SMD1 was first publicly revealed in 2016, and the first batch of tanks was delivered for official military trials late last year.

The light tank is powered by a 500 horsepower UTD-29 multi-fuel diesel engine, which provides a maximum road speed of 70 km/h. It is also fully amphibious and is propelled by two waterjets, which provide a maximum speed of 7 km/h. It is sea-worthy up to Seat State 3, and can even fire its main gun while in the water.

Despite its light armor, the Sprut-SDM1 still has the firepower of a modern main battle tank (MBT), as it is armed with a fully-stabilized 2A75 125mm smoothbore gun. It can fire all standard 125mm ammunition used by the T-72 and T-90 MBTs, and can also launch anti-guided missiles. It also employs an automatic ammunition loading system, which reduced the size of the crew to just three including a commander, gunner and driver. In a fight, the tank would likely operate more as a small tank destroyer – where its speed and small size could allow it to get out of a fight just as quickly as it got into one.

Given its capabilities, it is easy to see why India has expressed such interest in the Sprut. In addition to how it could handle in the mountains, this tank could be well suited to amphibious operations including being able to easily cross rivers and lakes – features that New Delhi may need should it find itself in a conflict with its other regional rival Pakistan.