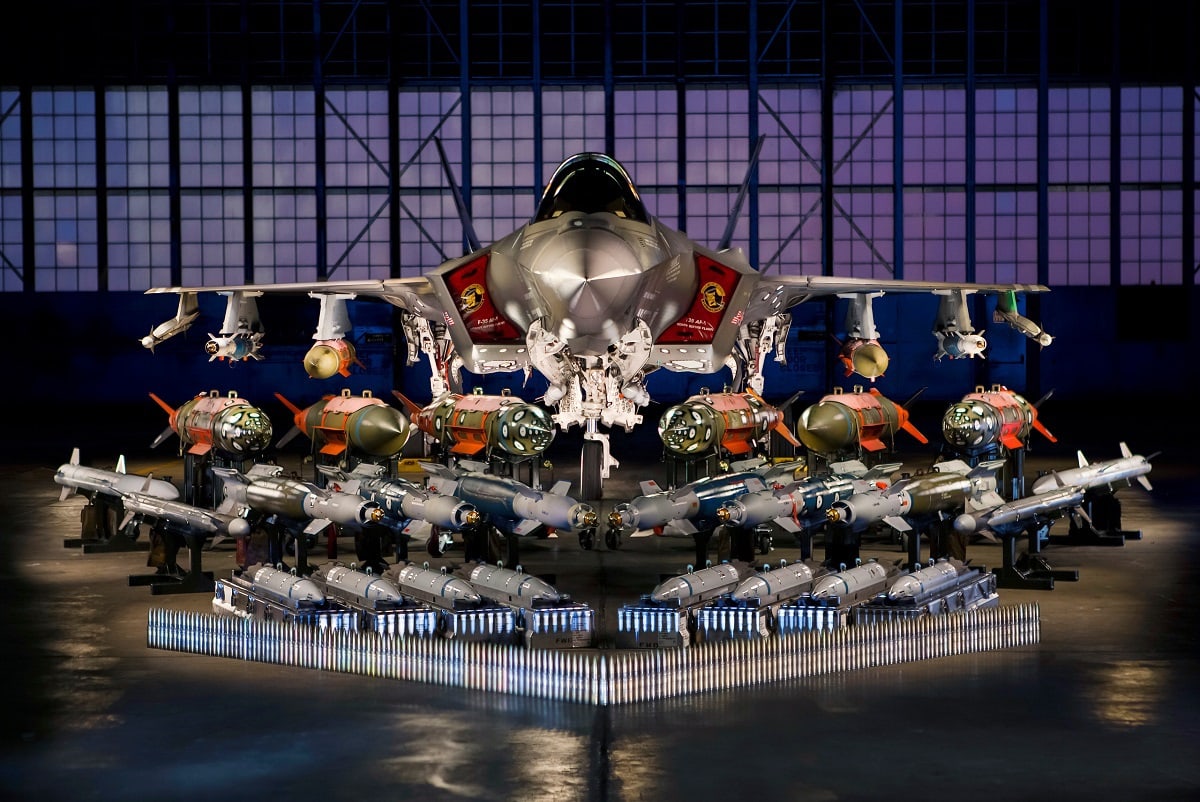 Let’s not mince words: a U.S.-China war would be hell on earth. It would likely start World War III. Millions— may be billions— of people would die if nuclear weapons were ever used in such a conflict. The global economy would likely face ruin— that’s what happens when the world’s biggest economic powers start shooting at each other. Thankfully the chances are remote it will ever happen.

Several days ago I examined in a short piece on these digital pages how China could do great damage to U.S. and allied military forces in a war. Thanks to over twenty years of large scale investments, the PRC has gone from being a third-rate military that could project very little offensive punch to arguably the second most powerful military machine on the planet. And with an emphasis on weapons systems that embrace anti-access/area-denial military doctrine (A2/AD), China seems to be developing the tools it needs if war with America did ever come to pass. Beijing’s motto these days: be prepared.

This article examines the challenges China would face against the U.S. in a conflict–but in a very broad, top-down, and practical sort of way. This time I will avoid the fun but sometimes easy to pick apart scenario-style type of analysis. While Beijing certainly has the tools to get the job done when it comes to a war with Washington, the challenges China would face in such a conflict would be immense— and many of them could be quite basic. The PRC would be going to war against the premier military power on the planet— some would argue the most lethal fighting machine of all time. In this essay we will review some of the important foundational reasons why many argue, quite convincingly, that the U.S. would very well defeat China in a war.

A Great Mystery: Just How Good Is China’s Military Anyway?

Yes, Beijing keeps cranking out those whizz-bang high-tech weapons of war like sausages. China has those shiny, new carrier-killer missiles that everyone is always fretting about (including yours truly.) Its building aircraft carriers, 5th generation fighters, multiple types of cruise missiles, nuclear and ultra-quiet diesel submarines, drones, mines and so on.

It all looks really good— at least on paper.

When it comes to a war with the U.S. how well would Beijing be able to use all that stuff? The real question seems pretty simple: yes, China is certainly developing all the military and technology goodies to field a potent force. However, how well can it operate all that equipment in the pressure filled situation of a war? Sure, Beijing is certainly developing a world-class military, but can its soldiers operate all that equipment competently? Just how well trained are they? You can have the best military in the world but if you don’t know how to use it, well, you get the idea.

Opinions are mixed on this for sure. Ian Easton from Project 2049, in a piece for The Diplomat, reminds us of the possible capabilities, nature, and mission of the PLA— and its certainly not all about America:

The state of “software” (military training and readiness) is truly astounding. At one military exercise in the summer of 2012, a strategic PLA unit, stressed out by the hard work of handling warheads in an underground bunker complex, actually had to take time out of a 15-day wartime simulation for movie nights and karaoke parties. In fact, by day nine of the exercise, a “cultural performance troupe” (common PLA euphemism for song-and-dance girls) had to be brought into the otherwise sealed facility to entertain the homesick soldiers…

While recent years have witnessed a tremendous Chinese propaganda effort aimed at convincing the world that the PRC is a serious military player that is owed respect, outsiders often forget that China does not even have a professional military. The PLA, unlike the armed forces of the United States, Japan, South Korea, Taiwan and other regional heavyweights, is by definition not a professional fighting force. Rather, it is a “party army,” the armed wing of the Chinese Communist Party (CCP). Indeed, all career officers in the PLA are members of the CCP and all units at the company level and above have political officers assigned to enforce party control. Likewise, all important decisions in the PLA are made by Communist Party committees that are dominated by political officers, not by operators.

So how much would the above impact the much-needed rapid reaction time essential to make quick decisions once the bombs begin to drop in a war with America? Is China up to the challenge? While the above exercise in 2012 could be just one isolated incident, the idea of the PLA being a “party army” is a very important reality.  What does this all mean in a war with America? Your guess is as good as mine.

How Good Can Beijing Fight “Jointly”?

There is no better way to make a modern military even more deadly than to fight “jointly.” Sharing intelligence and waging war by coordinating your forces across multiple domains (think air, sea, space, cyber and land) is the best way to achieve hard fought military objectives and is the ultimate force multiplier. It is something America and many other great powers are putting a lot of time, energy and resources into.

China is also working towards such a goal. And while sources vary on how well Beijing could wage a major joint operation against a determined foe— especially against the U.S.— many have their doubts. In a recent report by the RAND Corporation titled “China’s Incomplete Military Modernization” the authors have some serious doubts when it comes to Beijing’s joint warfighting capabilities:

Many Chinese strategists identify the inability to conduct integrated joint operations at the desired level of competence as the central problem China faces as it aspires to project combat power beyond its land borders. Indeed, Chinese sources highlight several problems that contribute to the PLA’s shortcomings in the area of joint operations and suggest that there is still a large gap between China and developed countries’ militaries, especially the United States.

In the same paragraph, the authors of the study also discuss issues with training, reinforcing my earlier point:

PLA publications also highlight continuing shortfalls in training, despite years of effort to make training more realistic and more valuable in terms of addressing shortcomings and improving the PLA’s operational capabilities. In addition, the publications point to persistent challenges in combat support and combat service support functions and forces, as reflected by frequent discussions of shortcomings in logistics and maintenance capabilities that appear in PLA newspaper reports and journal articles.

When it comes to military technology, keeping ahead of the curve is key. America seems to crank out new defense tech all the time. The question over the long-term for China will be how well it can keep up in the tech game. Specifically, can Beijing develop advanced military systems indigenously? This might be the biggest challenge for China when we look out over the long term (10-20 years in the future) in a conflict with America.

We all know China has a great track record of, well, permanently “borrowing” the designs of many of the world’s best combat systems. However, one can only gain so much by playing copycat. Even a copy needs to be reverse-engineered— and sometimes that isn’t easy. A poor copy would do China no good on the battlefield. Over the next decade, Beijing will need to develop ingeniously many of the world’s most sought-after pieces of military hardware and other intricate systems that make them go— things like jet engines— that are not easy to produce with precision and that they currently struggle with. China will also need to get good at maintaining and improving world-class equipment under the worst of conditions. While it might not be sexy, innovation and keeping ahead of the curve would pay dividends in a war against America when we look out over the long term. Only time will tell if Beijing is up to the challenge.

The Last Time China Fought a Major War Was the Year I was Born: 1979

The best way to get good at anything is too actually go out and do it— and do it a lot.  The challenge for China is that you can wargame all you want but unless you have experienced actual combat there will always be a learning curve.  And the curve for China is steep: Beijing has not fought a major war since its roughly one-month skirmish with Vietnam in 1979.

Now, while knowledge from a conflict thirty-five years ago might not translate into success against America in a war, having little to no combat experience could pose some challenges for China. Washington going into any conflict with Beijing would certainly have a decisive advantage when it comes to warfighting. While the conflicts America has fought over the last twenty-five years were not A2/AD battle royals, the last few decades has offered the U.S. military the capability to test out new systems and tactics, fix things that aren’t working when it comes to combat operations, and make important adjustments for future scenarios. For example, the U.S. did not need to send F-22s into Syria, however, the opportunity to learn on the battlefield and gain experience is of vital importance and likely the main reason for doing so. And it is one area that would have to be considered a major advantage in a battle against China.

Parting Thoughts: Does America Have the Edge?

Sometimes the best way to approach a problem is to look at it from multiple angles; not just from your typical scenario of move, countermove. What are the actual weaknesses of the different players when it comes to effectively waging war against a modern and determined foe on a practical level?

The above demonstrates not only some of the basic challenges China would have over the short and long term in a fight with America but also clearly illustrates a much greater dilemma— creating a military that (at least on paper) can take on America. That isn’t to say China couldn’t do it, for I am on record that Beijing could do incredible damage to American and allied forces in a fight, and maybe even win depending on the situation. What I am saying: America has one heck of a head start in such a contest.

Harry Kazianis is a Senior Director at the Center for the National Interest. This piece first appeared several years ago.