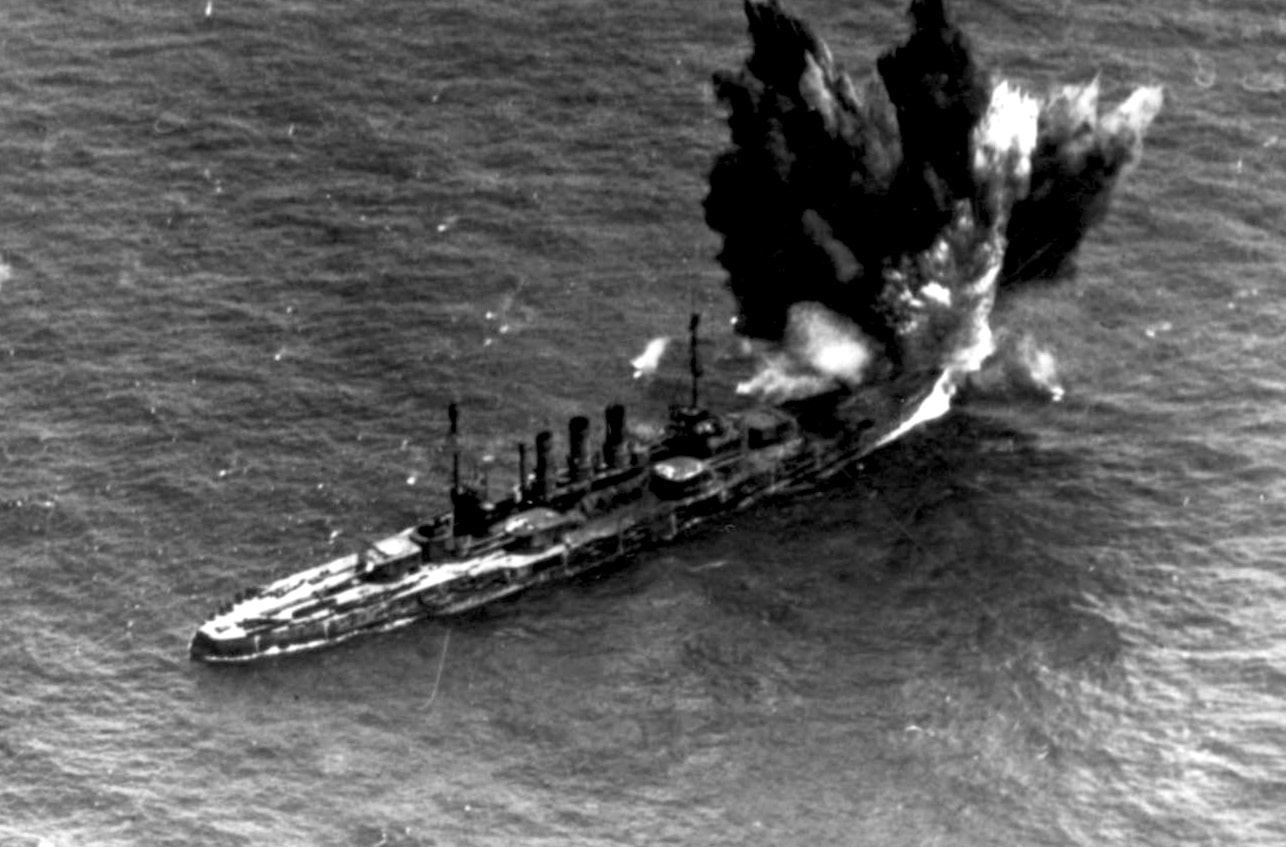 Used as a target ship for bombing attacks near Cape Henry, Virginia (USA), the former German battleship Ostfriesland was sunk by bombs on 21 July 1921. Brig. Gen. Billy Mitchell, an outspoken supporter of air power, waged a war throughout his career against his superiors who believed that the airplane was better suited for observation. As head of aviation in the Army Signal Corps during World War I, Mitchell felt otherwise - he knew the power of aviation for the military. Finally, in 1921, he persuaded the Army and the Navy to allow him to demonstrate the capabilities of the airplane by attempting to sink captured German warships.

Even after the USS Missouri (BB-63) was officially decommissioned in 1992, the “battleship retirement debate” continued – with some military pundits arguing that the old battlewagons were still the best way to provide fire support for amphibious assaults as well as to other troops near shorelines. A counterargument was made that smaller warships such as the U.S. Navy’s Arleigh Burke-class destroyers could provide similar support fire from vastly smaller platforms, while close air support fighters and even advanced missile systems can do the job that was once the domain of the battlewagons.

Nearly twenty years later, when the USS Iowa was officially donated by the U.S. Navy to become a museum ship in 2011, the debate about the retention of large capital warships became essentially academic. Yet, it was 100 years ago last week that the writing should have been on the wall that the battleship’s days were numbered.

Just over a century ago, on July 21, 1921, Brig. Gen. William “Billy” Mitchell demonstrated the superiority of airpower against naval vessels. Mitchell wasn’t a “Navy man,” and as a U.S. Army general, he was a proponent of airpower. He was a forward thinker, who led a group of U.S. Army planes on a bombing test that successfully sunk a mothballed German battleship from the air, something that hadn’t been done previously. It signaled a new era in warfare and even sparked a struggle within the U.S. military on the role of aircraft.

It also led to Mitchell’s court-martial.

A Powerful Fleet of Battleships

It is easy to see why many in the U.S. Navy didn’t take kindly to Mitchell’s belief that aircraft could sink a battleship – the U.S. had thirty-nine of the capital ships in 1918, and while some were obsolete, they were still battle-worthy. It was the Navy that just a few decades earlier had put the United States on the world stage with its victories during the Spanish-American War.

Likewise, even as the Army was being downsized following the First World War, Congress approved a naval expansion. Highlighting the vulnerability of a warship isn’t something the brass appreciated; especially when it was seen as the backbone of the Navy.

However, Mitchell didn’t just butt heads with those who served in the Navy, he also clashed with Maj. Gen. Charles T. Menoher, a West Point classmate of Gen. John J. Pershing. Menoher and Pershing, then head of the Army, believed that airpower should be subordinate to the infantry – even as Menoher was Chief of the Air Service.

Moreover, while Mitchell served as assistant to Menoher, Mitchell had become a minor celebrity from being a combat pilot in World War I. That popularity didn’t help matters to say the least, but eventually, Mitchell would be given a chance to demonstrate the capabilities of airpower.

More Than a Publicity Stunt

In the summer of 1921, Mitchell was finally provided an opportunity to demonstrate how an air assault could be effective against large vessels, even as the Navy maintained that sea-based defenses were the best front line to stop an attack on the United States. Fearing that the Navy would keep the tests secret, Mitchell pulled out all the stops – he collected 125 plans and crews to man them and made sure that senators, congressman, diplomats, and most notably, reporters were present to witness the demonstrations.

In a series of simulated sorties, Mitchell’s aircrews were to bomb a number of German vessels that had been surrendered to the United States following World War I. These included a submarine, a destroyer, a cruiser, and most notably the battleship Ostfriesland. Over the course of several weeks in the summer of 1921, the first three vessels were easily sunk even by the World War I biplanes of the era. That included the light cruiser, which was sunk with just a 600-pound bomb.

The heavily armored battleship took a greater effort, including multiple sorties over two days – but on July 21, 1921, the ship rolled onto its port side and capsized. It was especially notable as Ostfriesland had previously taken 18 hits from the big guns of a British battleship at the Battle of Jutland in 1916, then struck a mine on the way home and still hadn’t sunk. The warship had been repaired in a matter of weeks following that naval engagement, and Mitchell accomplished with an airplane what the British failed to do with a battleship.

“Mouths of the VIPs gaped open,” wrote Mitchell biographer Douglas Waller. “No one spoke. Politicians, many of whom had staked their careers on funding the battleships, looked as if they had just witnessed a murder. Some admirals sobbed like babies.”

Mitchell was hailed as a hero, but only briefly.

Some of the top brass wanted to keep the results quiet out of fear that it could make the Navy look weak. The Navy even claimed for years that Mitchell violated the rules of the tests, while even the Army tried to minimize the success.

“The battleship is still the backbone of the fleet and the bulwark of the nation’s sea defense, and will so remain so long as the safe navigation of the sea for purposes of trade or transportation is vital to success in war,” read a Joint Army and Navy Board report on bombing tests, made public Aug. 19 and reported in The New York Times. “The airplane, like the submarine, destroyer, and mine has added to the dangers to which battleships are exposed, but has not made the battleship obsolete.”

Sunset of the Battleship

The U.S. Navy continued to build battleships, but others saw that airpower would tip the scales in the coming years. The U.S. Navy would go on to develop aircraft carriers, but Mitchell was essentially cast aside. He was transferred to Fort Sam Houston, where he was assigned as the aviation officer of the Eighth Corps in 1925. He remained outspoken and even went so far as to accuse the Navy and War Departments of “incompetence and criminal negligence” following the loss of the rigid airship Shenandoah.

The Army officer was called to Washington, DC and court-martialed on the charge of “Conduct to the prejudice of good order and military discipline and in a way to bring discredit upon the military service.”

Mitchell was convicted of insubordination. Rather than serve a five-year suspension, he decided to resign his commission. He continued to be an outspoken advocate of airpower, but his influence was limited. He died following a short illness on Feb. 11, 1936.

However, he received several honors following his death, including a posthumous promotion to major general by President Harry Truman, but his legacy lived on when the B-25 “Mitchell” bomber was named in his honor. The aircraft became infamous for its use in the 1942 “Doolittle” raid against Japan, while it also proved to be a capable anti-shipping aircraft during the Second World War.