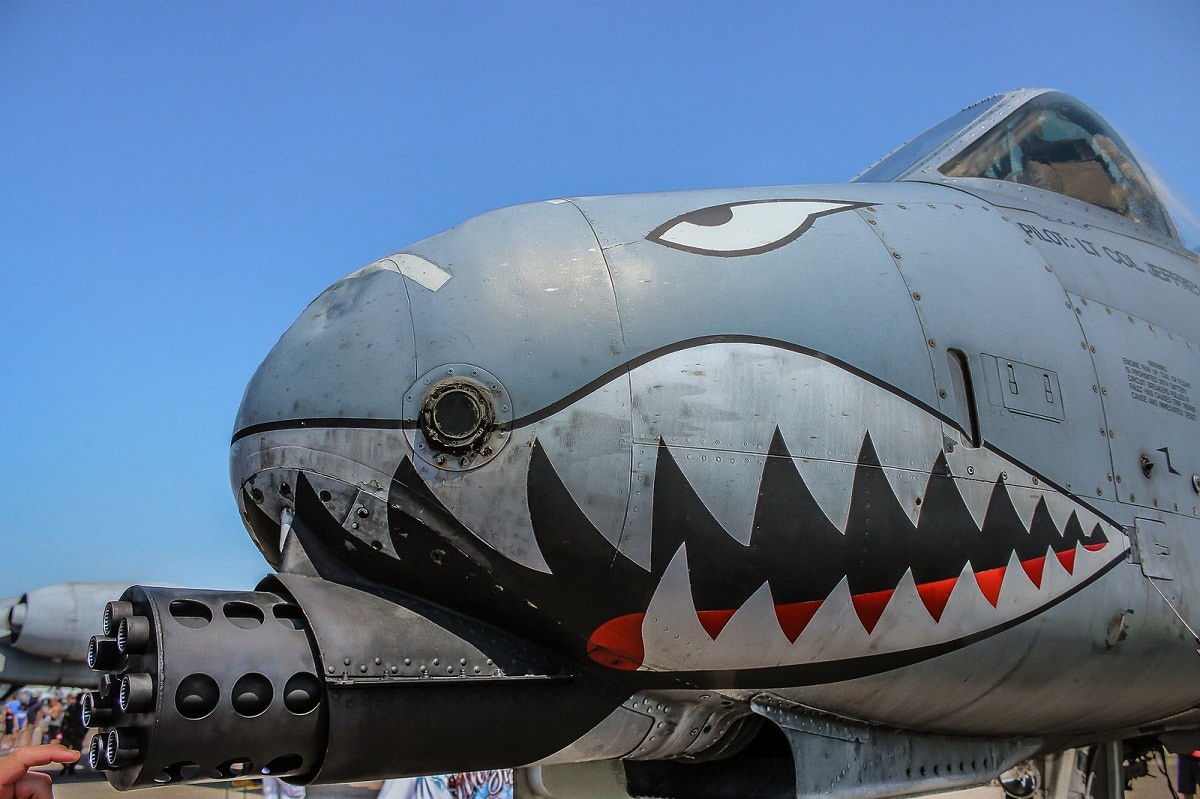 US Air Force Lt. Col. Matthew Shelly’s first big combat mission as an A-10 Warthog pilot was a nighttime attack on a Taliban training camp in the mountains of Afghanistan.

“These were Taliban who were training to kill friendlies, to kill Americans,” Shelly said.

US ground forces started the attack with a barrage of rocket artillery, which was followed by bombs dropped from bombers and strike fighters.

“It looked like an ant hill exploded,” Shelly said, describing what he could see that night in his targeting pod. “All these enemies were running down the hill.”

Relying on targeting guidance from an AC-130 gunship, Shelly and his flight lead made seven passes, firing almost all of the 1,150 rounds each of their A-10s carried.

“My flight lead ended up emptying his gun and I nearly emptied all of mine on the enemy running down the mountain,” he said. Shelly had about 100 rounds left when the fighting was finished.

That mission was during his first deployment to Afghanistan in 2009, a few years after Shelly joined the Air Force and about a year after he graduated from A-10 training, where he fired the cannon for the first time.

‘It shakes the whole airplane’

The A-10 Thunderbolt II, commonly called the “Warthog,” is basically a flying gun. It is built around the 30 mm GAU-8 Avenger, a powerful cannon able to fire at a rate of roughly 4,000 rounds per minute. The seven-barrel gun was designed for close air support (CAS) missions and is famous for the thundering “BRRRRRRT” noise it makes when fired.

Shelly, now the commander of the 74th Fighter Squadron at Moody Air Force Base and a seasoned A-10 pilot with 16 years in the Air Force and multiple combat deployments, told Insider that “the coolest thing I’ve ever done in an airplane to this day is shooting the gun.”

“It’s about two months into training before you actually shoot the gun, and it’s a big deal” he said. “They make a big deal out of it because the gun is a big deal for the A-10.”

“It is like when you’re a kid and your dad finally lets you shoot off all the fireworks by yourself,” Shelly said. “When you’re shooting the gun yourself, that’s what it’s like. It is like I finally get the keys to the car. I get to light the fireworks myself.”

A-10 pilots fire the aircraft’s cannon in short bursts, with a combat burst lasting about two seconds.

Firing the gun fills the cockpit with the smell of cordite, an explosive propellant which smells like “a mixture of gunpowder and an electrical fire.”

It can be pretty loud too. Pilots actually wear two layers of ear protection when they fly. More than hearing and smelling it, A-10 pilots feel it.

“It feels like driving over railroad tracks. That is what it feels like.” Shelly said. “You’re sitting right on top of the gun, so it shakes the whole airplane.”

In addition to the cannon, the A-10 Thunderbolt II can carry up to 16,000 pounds of varied munitions. This aircraft, which was first introduced in the 1970s, is the first US Air Force plane that was specifically built for close air support missions and engaging ground targets, including tanks and other armored vehicles, according to the service.

The Warthog can fight from austere locations, and it can even battle enemy aircraft if necessary. It is an awesome plane, especially with some of the upgrades in the A-10C, and it is loved by the pilots who fly it. But it was not Shelly’s expected choice.

“I’ve always been around airplanes and wanted to fly,” Shelly, whose father is a civilian pilot and who began flying small aircraft when he was 16, said. Shelly grew up in Kansas, where his father worked primarily as a tanker engineer at Boeing, exposing him to big aircraft like the KC-135 Stratotanker.

“I wanted to fly big airplanes,” Shelly told Insider. “I had been around tankers, and I liked the tanker mission.”

“That’s what I wanted to do when I started my pilot training, but then I flew the T-6 [Texan], which is the first airplane that you fly in pilot training,” Shelly said. “I was like, you know what, I like this fighter-type flying. I like flying upside down. I like pulling Gs. I like doing all those kinds of things.”

Shelly shifted to a training path that ultimately led him to the A-10. A brief period when he served as an MQ-9 Reaper drone operator aside, he has been all in for the A-10 throughout his Air Force career. For him, at least, flying the A-10 is about so much more than the thrill.

‘Protecting the friendlies on the ground’

“We are attack pilots because we fly an attack airplane. We fly a flying gun,” Shelly said. “But most of all, we have a very distinct and designated mission of close air support. That means protecting friendlies on the ground, and we take a lot of pride in that.”

For Shelly, that CAS mission and the culture associated with it is more important than the aircraft itself, which the Air Force plans to eventually phase out.

“I’m going to do everything I can to fly the A-10 until its gone,” Shelly said. “But if I was forced to go fly something else because the A-10 was not there, my answer would be the F-35.” The fifth-generation fighter is a very different aircraft, but it could be used for close air support.

“I am not as worried about the airframe as I am about the close air support culture,” he said. “I don’t want to lose that culture, that corporate knowledge, the understanding of how CAS works and the tactics, techniques, and procedures we have built in the A-10 community.” 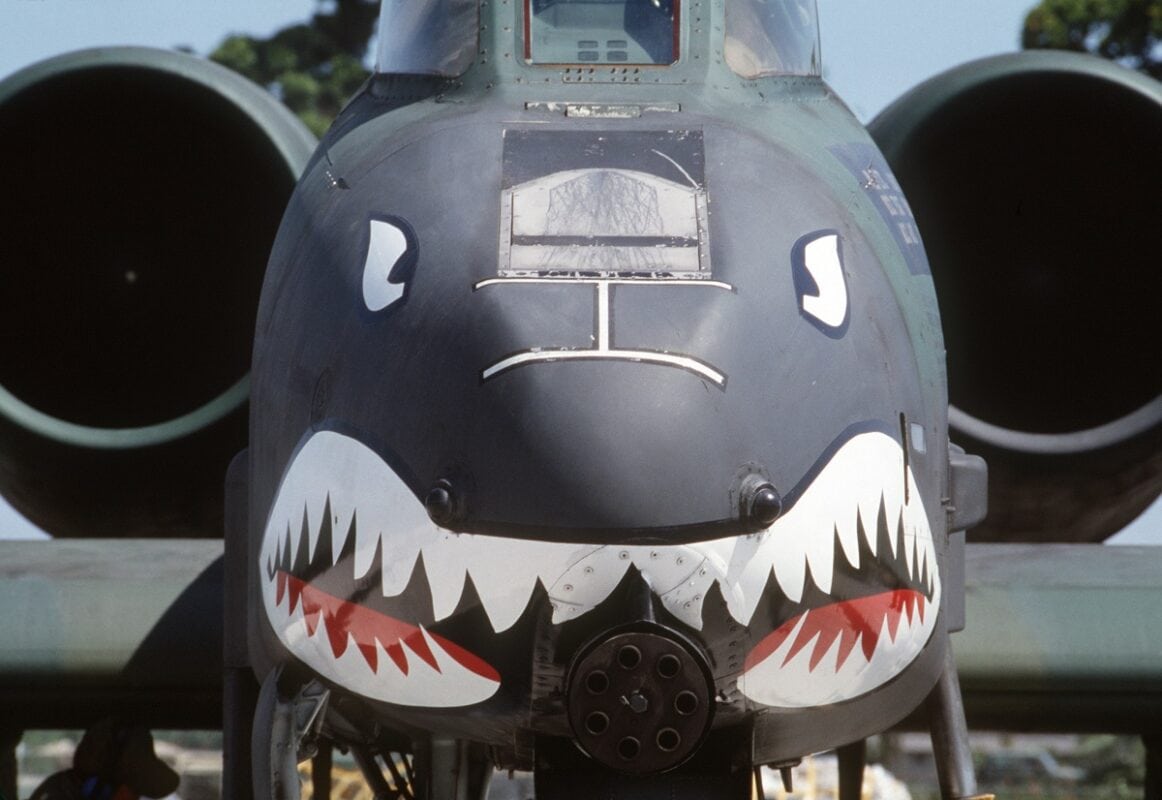 A front view of a 23rd Tactical Fighter Wing A-10 Thunderbolt II aircraft parked on the flight line during Exercise SOLID SHIELD ’87.

“We cannot lose that. We cannot afford to lose that,” Shelly said. “We still have to be experts at that because the guys on the ground require that from us.”