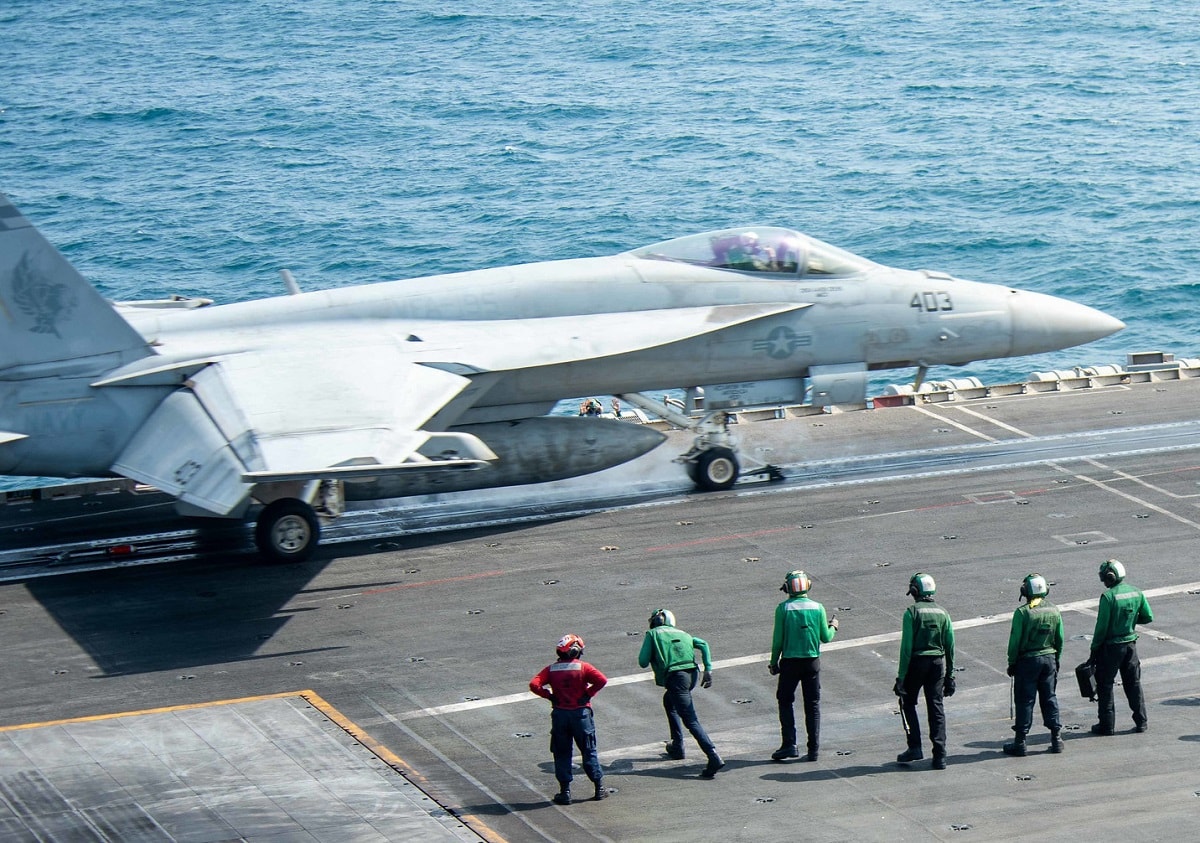 ARABIAN SEA (Aug. 18, 2021) An F/A-18E Super Hornet attached to the “Dambusters” of Strike Fighter Squadron (VFA) 195 launches from the flight deck of the aircraft carrier USS Ronald Reagan (CVN 76) in the Arabian Sea, Aug. 18, 2021. Ronald Reagan is the flagship for Carrier Strike Group 5 and is deployed to the U.S. 5th Fleet area of operations in support of naval operations to ensure maritime stability and security in the Central Region, connecting the Mediterranean and the Pacific through the western Indian Ocean and three strategic choke points. (U.S. Navy photo by Mass Communication Specialist Seaman Eric Stanton) 210818-N-UF592-1125

In 2034, a small American flotilla on a routine ‘freedom of navigation’ patrol in the South China Sea encounters an unflagged trawler in distress, with smoke billowing from its bridge. What follows is far from routine, as events escalate and then spin out of control. That’s the beginning of 2034: A novel of the next world war.

This isn’t your average airport bookstore blockbuster. Novelist Elliot Ackerman, the author of several award-winning military-themed novels, including Waiting for Eden, has teamed up with James Stavridis, who spent more than 30 years in the US Navy, including long operational stints in the Indo-Pacific, rising to the rank of four-star admiral. He also served as supreme allied commander in NATO and dean of the Fletcher School of Law and Diplomacy at Tufts University in Massachusetts. Stavridis has published widely on naval affairs, including Sea power: The history and geopolitics of the world’s oceans, and contributes actively to the ongoing international discussion on the implications of China’s rise.

Stavridis and Ackerman have combined their talents—the former’s detailed operational knowledge of military strategy and tactics and the latter’s narrative skills—to come up with a realistic, detailed and highly readable account of how the next world war might begin.

The book is built around a scenario in which China, once it has brought its military up to world-class standards (it is currently aiming for 2035), moves quickly to oust the United States and other foreign navies from the South China Sea and use its new-found power to unite Taiwan with the mainland. It works closely with its allies, Iran and Russia, to achieve that.

China’s advanced offensive cyber capabilities catch the US off guard, highlighting its Achilles heel—the book devotes an entire chapter to ‘blinding the elephant’, and it’s a comprehensive attack. China’s technological edge allows it to black out US military communications in the South China Sea, have its Iranian allies remotely take control of a US fighter plane to land it at an Iranian airfield and take the pilot hostage, use cyber cloaking, stealth materials and satellite spoofing to keep its fleet virtually invisible for extended periods, hack into secure White House communications systems and engineer a blackout of Washington. Using more conventional military means, China’s Russian allies blow up underwater cables in the Barents Sea, drastically slowing internet connectivity across the US.

The book realistically describes strengths and weaknesses on both sides. China has superior cyber technology but is operationally inexperienced and bureaucratic, especially when faced with the unexpected. The US, on the other hand, is remarkably ill-prepared for China’s cyber onslaught but superior in terms of operational experience and flexibility.

The authors present a chilling scenario of the two antagonists escalating the conflict through a series of miscalculations and mistakes. The US initially underestimates China’s technological capabilities and falls into a relatively simple trap baited with a Chinese fishing boat. When the US predictably mobilises a large naval force, China’s response is excessive. Unaware of the US ‘red lines’, the Chinese unintentionally provoke a tactical nuclear strike on a Chinese port. A Chinese tactical counterstrike follows, and the book describes the simplistic thinking that could lead to an escalation of tit-for-tat responses.

The book’s publication is particularly timely, given the recent warning by outgoing Admiral Phil Davidson, who led US operations in the Indo-Pacific, that China could attempt to take over Taiwan as early as 2027. In testimony to the US Congress in March, Davidson said ‘I cannot for the life of me understand some of the capabilities that [China is] putting in the field, unless … it is an aggressive posture’.

Not surprisingly, given Stavridis’ background, the book has a strong military bent. The authors play up the role of the military chain of command as the crisis escalates and pay less attention to political leaders and the behind-the-scenes diplomatic negotiations that one would expect in a crisis of this magnitude.

The Chinese Communist Party general secretary and president generally also chairs the Central Military Commission and would play a key role in crisis decision-making, but is not mentioned. On the US side, the political leadership is presented as being surprisingly reticent to act. The reader waits in vain for either leader to activate the hot line. But that may accurately reflect the current lack of effective communication mechanisms between the US and China.

2034 is thought-provoking reading for military and diplomatic professionals dealing with China, and for the generalist concerned with China’s rise. The scenario outlined by Stavridis and Ackerman lends credence to recent calls for the US to strengthen its military capabilities in the Indo-Pacific. It’s also a riveting read.

Robert Wihtol is an adjunct faculty member at the Asian Institute of Management and former Asian Development Bank country director for China and director general for East Asia.