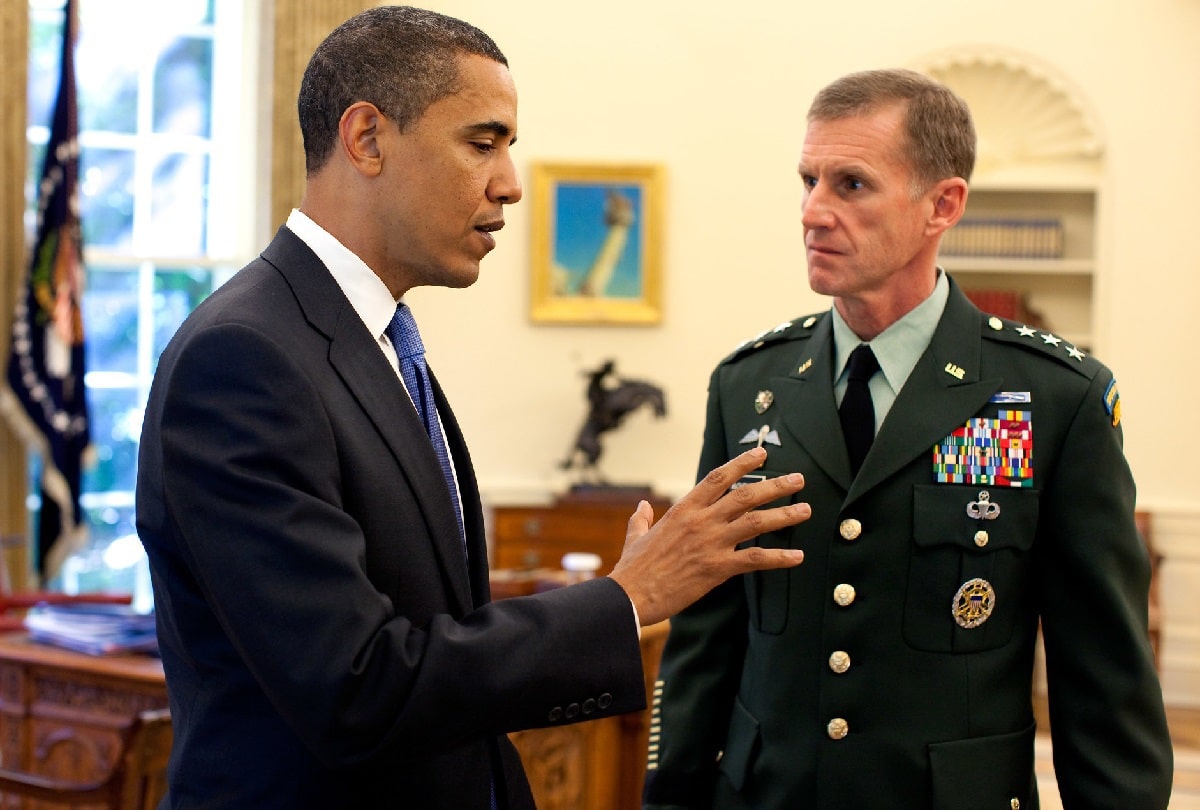 President Barack Obama meets with Lt. Gen. Stanley A. McChrystal, the new U.S. Commander for Afghanistan, in the Oval Office Tuesday, May 19, 2009. (Official White House photo by Pete Souza) This official White House photograph is being made available for publication by news organizations and/or for personal use printing by the subject(s) of the photograph. The photograph may not be manipulated in any way or used in materials, advertisements, products, or promotions that in any way suggest approval or endorsement of the President, the First Family, or the White House.

As the withdrawal from Afghanistan enters its final hours, the heat President Joe Biden continues to take, even from his own party, for the messy and chaotic operation, has been withering. Even his political opponents, however, have to grudgingly respect Biden’s willingness to accept responsibility and remain firmly committed to his decision. That steel spine is in remarkable contrast to all his predecessors – especially that of Barack Obama.

For all the praise many heap on the 44th president, we owe it to the American people – and those who gave the full measure of devotion to this country by sacrificing their lives – to honestly examine the circumstances surrounding Obama’s decision at the end of his administration not to withdraw.

A clear picture is now emerging that had Obama not given in to the pressure to abandon his pledge to end the war, the U.S. could have withdrawn in far better shape than what we are currently witnessing – and preserved the lives and limbs of literally hundreds of American troops who unnecessarily died after his Administration refused to order a withdrawal.

On December 1, 2009, Obama somberly addressed the nation at the West Point Academy to announce a significant surge of troops to Afghanistan.  The objective of the surge was to, “pursue a military strategy that will break the Taliban’s momentum and increase Afghanistan’s capacity over the next 18 months.” His senior military advisors had, in part, convinced him the mission could be accomplished in that timeframe.

Jonathan Alter, in his book “The Promise,” explained on the day Obama finally made the decision to surge, he pointedly asked his senior commanders and advisors if the mission could be accomplished by his withdrawal date of June 2011. According to Alter, General David Petraeus promised that the U.S. could be out and hand over operations to the Afghan army within 18 months.

Obama was stern and clear on what he wanted to accomplish and that he wanted to get out quickly. Had he remained true to his intentions, the United States would have been in a far stronger position at the end of his Administration. Unfortunately, when it became clear that the assurances given him by his top generals of a quick victory proved to be wrong, Obama wavered – and then began knowingly deceiving the American people.

In December 2019, Craig Whitlock of the Washington Post published an extraordinary compilation of documents that revealed American officials discussed the deteriorating situation in Afghanistan in private but gave often glowing reports in public. Some of the reports exposed the duplicity between what Obama said publicly but knew privately.

Obama claimed he was on track in 2014 to bring the war to a “responsible end.”  In fact, Whitlock wrote, “the war was nowhere near a conclusion, ‘responsible’ or otherwise.” The “baldfaced claims to the contrary,” Whitlock continued, “ranked among the most egregious deceptions and lies that U.S. leaders spread during the two decades of warfare.”

Though it was clear to Obama by the summer of 2014 that Petraeus and Mullen’s assurances of success in 18 months had been completely wrong, he hid the truth from them and continued prosecuting a war he knew he could never win, allowing American blood to be spilled with no benefit to our country. As it would turn out, June 2014 proved to have been the best time to withdraw when almost all the advantages were on our side.

At that time, the Taliban controlled just 31 of Afghanistan’s 398 districts. The government forces were in control of more than 330 districts. There were an estimated 20,000 Taliban fighters. Instead, as of April when Biden announced his intention to withdraw, the Taliban was in control of 77 districts and the Afghan government a paltry 129. The United Nations Security Council estimated there were up to 100,000 Taliban fighters at the beginning of June. 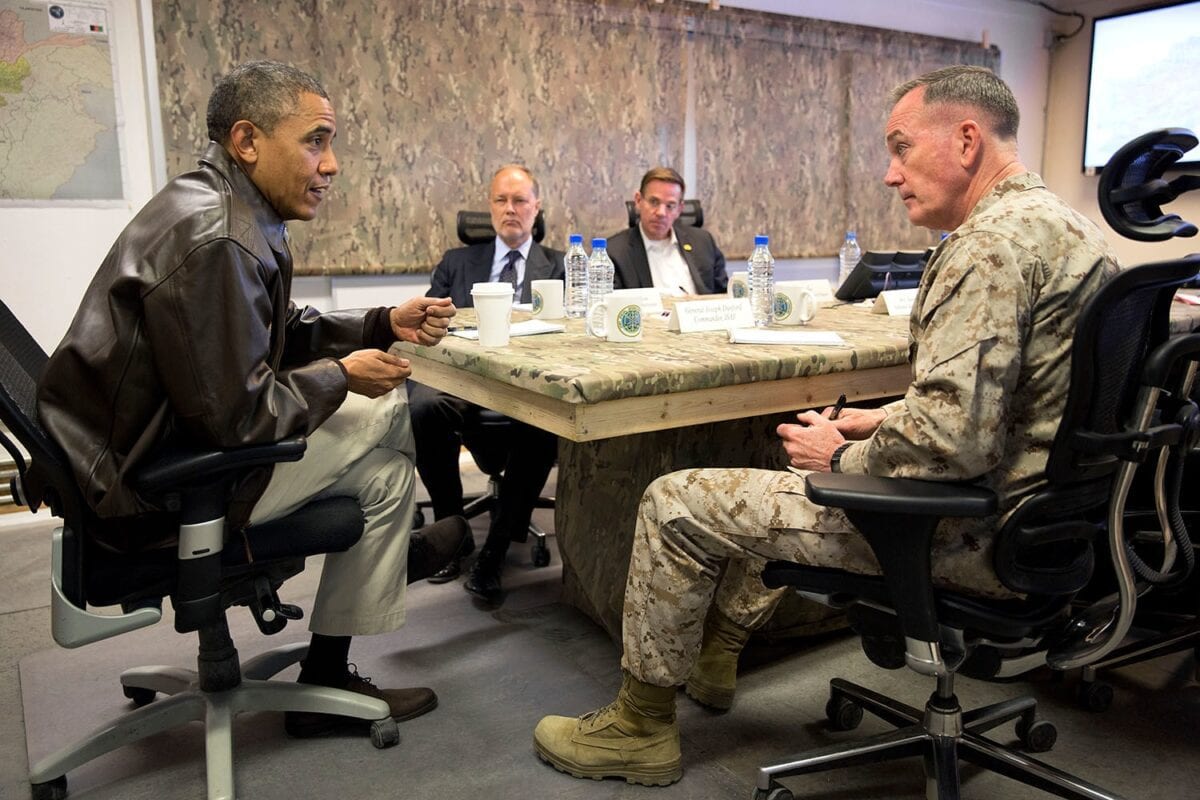 Because Obama punted on this opportunity (and Trump refused to fully withdraw during his term), we withdrew under the worst imaginable conditions for ourselves and for the Afghan government. Though Biden could have conducted the withdrawal in a much better way, leaving was as right today as it was a decade earlier during the Obama Administration. It has been 20 years of deception and irresolute leadership across the board in America that ultimately resulted in the bloody and chaotic situation on display in Kabul today.