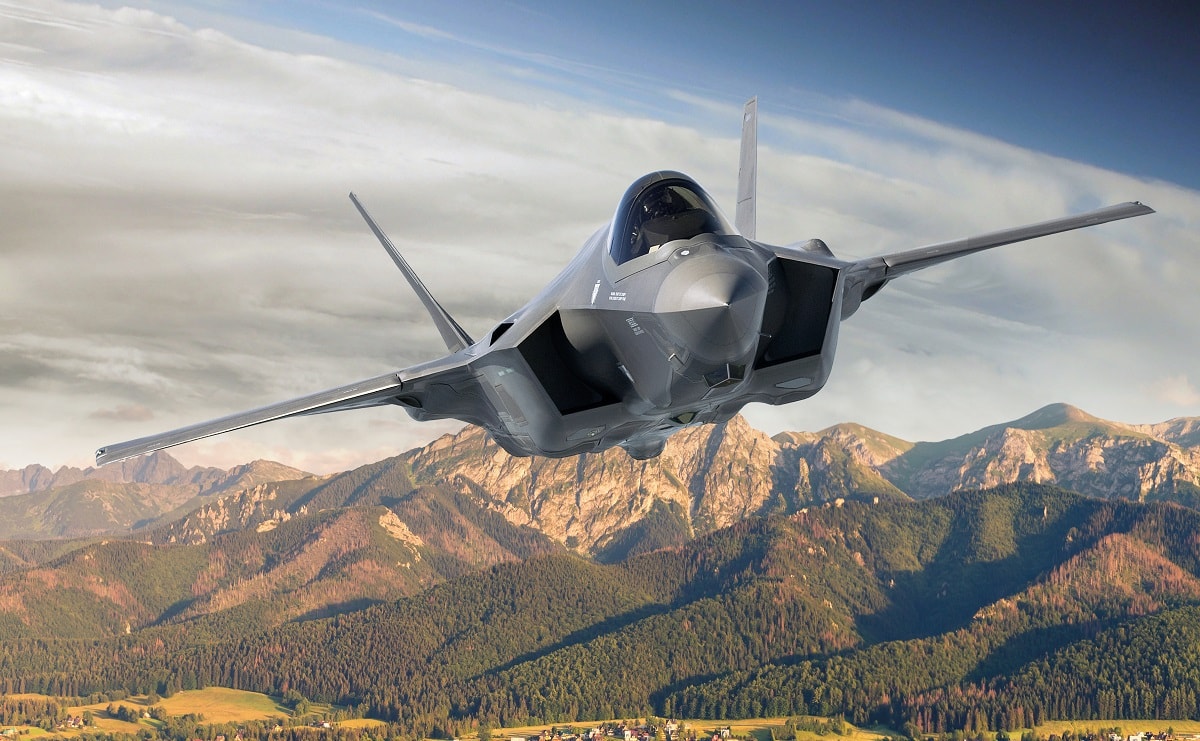 On April 23, 2019 the Air Force Research Laboratory (AFRL) tested a fiber-optic laser at the White Sands Test Range in New Mexico that successfully shot down “multiple air-launched missiles in flight.”

The Self-protect High Energy Laser Demonstrator (SHIELD), pictured here, currently exists as a bulky, ground-based demonstrator. However, the Air Force is optimistic that SHIELD can be shrunk to a small pod.

If airborne-lasers prove as viable and effective as expected, then future laser weapons could profoundly transform aerial warfare by increasing the survivability of fighters, bombers and even tankers and transport planes to deadly anti-aircraft missiles. Further down the line, lasers could eventually serve as very fast and precise air-to-air and air-to-ground weapons with virtually unlimited magazines.

The Laser Dogfights of the Future?

Laser weapons are growing rapidly in prominence, from small-arms and tank-mounted laser dazzlers used by China, to ground or helicopter-mounted anti-drone and missile lasers tested by the Army, and close defense systems on U.S. Navy ships. Lasers possess the advantage of exceptional speed (it’s hard to beat the speed of light!), stealth and precision, as well as extremely low cost per “shot” and virtually unlimited magazines.

SHIELD is foremost a defensive Active Protection System designed to destroy or disrupt incoming air-to-air and surface-to-air missiles. Currently, long-range missiles like Russia’s 48N6 surface-to-air missile or R-37 air-to-air missile can threaten vulnerable support radar and tanker planes from over 200 miles away. While fourth- and fifth-generation jet fighters only become visible on radar at much shorter ranges, their odds of evading more maneuverable short-range missiles are thought to be as low as 20-30 percent.

Though lasers lack a kinetic “pushback” effect, even a relatively weak laser could in theory quickly and precisely disrupt or destroy the sensitive optical guidance systems of incoming missiles. More powerful lasers could damage missile flight control fins, or even thermally trigger warheads. In this video, you can see a ground-based laser destroying drones to get an idea of what that might look like.

More powerful lasers could also be readily adaptable offensive weapons targeting other aircraft and even surface targets.  As lasers could potentially do double duty as sensor systems, these could allow for very rapid engagement times.

Of course, effective range, and the number of seconds of sustained “burn” required to achieve destructive effects will be important factors in determining a laser system’s effectiveness. Furthermore, a laser can only engage one target at a time, and must be mounted in such a way that it can draw a direct line of fire to potential targets.

Nonetheless, a laser would have virtually unlimited ammunition, would be nearly impossible to “dodge,” and could be useful for attempting precise, non-lethal or low-collateral damage attacks on material and vehicle targets. This last point explains why the Special Operations community is slowly working towards deploying 60-kilowatt lasers on its AC-130J Ghostrider gunships.

Lasers could significantly increase the survivability of both stealth and non-stealth fighters when operating in denied airspace, forcing enemies to expend more missiles to over-saturate defenses.

Energy weapons could also provide a badly needed close layer of defense for deep-penetrating stealth bombers like the B-2 Spirit or forthcoming B-21. Currently, the B-2 relies entirely on stealth for survivability, and lack defenses against interceptors engaging them within visual range. Similarly, laser turrets installed on transport, tanker, and support planes could give these large and vulnerable aircraft a much better chance of surviving surprise missile attacks.

If lasers are widely adopted, the current paradigm favoring stealth fighters with beyond-visual-range missiles may change as many more missiles are needed to achieve a high probability of kill. This could incentivize more aggressive engagements resulting in within-visual-range dogfights—possibly including laser-based attacks, which would not be easily out-maneuvered, intercepted or decoyed.

Instead of using volatile chemicals like earlier lasers, LANCE employs fiber-optic cables to merge beams of light together to generate beams with “tens of kilowatts” of power. Its modular design allows power levels to be scaled by removing or adding modules. It is described as especially efficient, able to transform 40 percent of its energy to output.

LANCE still needs to be ruggedized to survive at high altitudes and speeds, and miniaturized to fit in a pod that can prevent thermal buildup from cooking the aircraft and manage the necessary electrical loads. In fact, the latest F-35 Block 4 upgrade program includes upgraded engines that can generate more electricity, likely with direct-energy integration in mind.

In January 2019, the AFRL also issued a notice for a six-month study called Compact High-Energy Laser Subsystem Engineering Assessment (CHELSEA) to “identify most promising technology options to scale laser power by…2024”. The more powerful CHELSEA laser may eventually replace SHIELD and would be more suitable for offensive applications.

Slides from an Air Force PowerPoint presentation obtained by The Drive in 2017 indicates the Air Force would like an internal or “conformal” laser mount—that is, one that hugs the airframe without compromising their aerodynamic and radar-stealth characteristics—for its upcoming sixth-generation fighters. It also indicated plans to integrate enough power management capabilities to support weapons with over 100 KW power for anti-air and -surface targets.

A third program involves the development of a laser-armed stealth drone designed to discreetly loiter over a hostile ballistic missile site in order to zap nuclear-tipped missiles during the boost phase.

Earlier in 2010 the Air Force successfully tested a modified 747 jumbo jet armed with a chemical oxygen iodine laser to shoot down two ballistic-missile targets, but the project was subsequently canceled because such an un-stealthy plane would not be survivable in hostile airspace. The concept of using F-35s with directed-energy-weapons for anti-ballistic missile patrols is also being explored, though the idea may be impractical due to the limited loitering ability of the short-ranged stealth fighter.

A stealth drone could address both the need for survivability and long endurance. In the fall of 2018, the Missile Defense Agency handed out contracts ranging from $29-37 million to Lockheed Martin, General Atomics and Boeing to develop a “Low Powered Laser Demonstrator.” The slow-moving drone must be able to transit 1,900 miles to a target location, then orbit the area at up to 63,000 feet high for thirty-six hours before returning to base. It must also have sufficient battery to sustain up to thirty minutes of 140 to 280-kilowatt laser fire.

The United States is not in planning for integration of aerial lasers in the 2020s and 2030s. The Franco-German FCAS and British Tempest stealth fighter programs, and the Russian MiG-41 interceptor have explicitly claimed in their program materials the conceptual aircraft will be built to support directed-energy weapons (DEWs). Furthermore, the Japanese F-3 and the Typhoon’s engines will also include a turbo-generator create and manage additional electricity—quite likely to power DEWs.