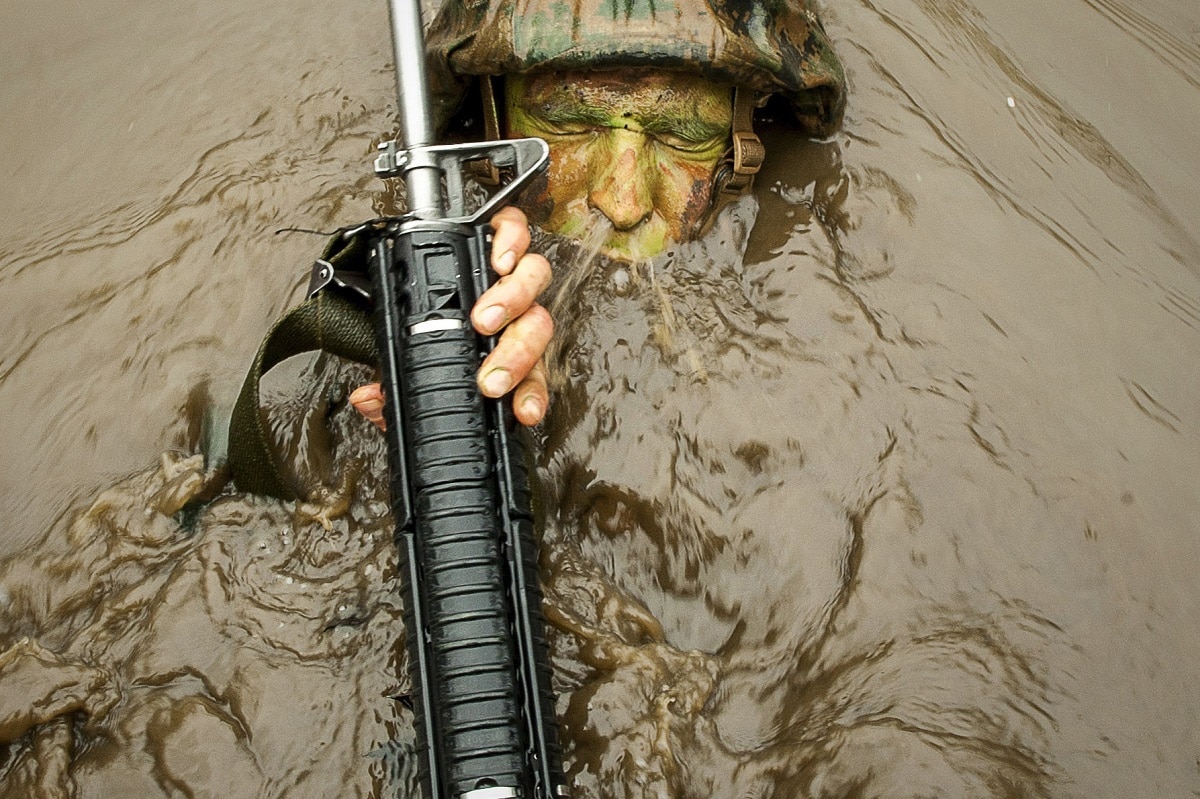 A candidates assigned to Delta Company, Officer Candidates Class-221, breaks the surface of the murky water of 'The Quigley' at Brown Field, Marine Corps Base Quantico, Va., on March 15, 2016. The mission of Officer Candidates School (OCS) is to "educate and train officer candidates in Marine Corps knowledge and skills within a controlled, challenging, and chaotic environment in order to evaluate and screen individuals for the leadership, moral, mental, and physical qualities required for commissioning as a Marine Corps officer." (U.S. Marine Corps Photo by Cpl. Patrick H. Owens/Released)

A common complaint among many U.S. citizens is where their tax dollars go. From high salaries for elected officials to government waste there are many legitimate concerns. Few, however, could be as upsetting as the some $83 billion that was spent equipping the Afghan Army and now as a result has supplied the Taliban with the latest weapons and military equipment they could have never otherwise acquired.

The ultimate beneficiary of America’s investment in the Afghan military is now clearly the Taliban, which has in a week been transformed from an insurgent force armed with whatever small arms it could acquire into a true modern army that includes not only firearms but helicopters and armored fighting vehicles. If the United States or its allies needed to return to Afghanistan, it would be far more difficult as the Taliban is both battle-hardened from two decades of conflict, but also now extremely well equipped and armed.

As Time magazine and the Associated Press reported, the $83 billion invested in the Afghan military over the past two decades is nearly double last year’s budget for the entire U.S. Marine Corps, which should be seen as a significant certain. In essentially one week, the Taliban has received a hardware that could keep it in power for decades to come.

The money was also more than what U.S. lawmakers spent on food stamp assistance to aid about 40 million Americans last year.

This isn’t to say that the assistance was misplaced – at least not at the time. The money was used to create and maintain a stable democracy in the region. Instead, the money armed an enemy of democracy and the United States.

So how did this happen? The Associated Press quoted journalist Craig Whitlock, author of The Afghanistan Papers, who warned that the U.S trainers tried to force western ways on Afghan recruits and gave little afterthought on whether those soldiers would actually be willing to fight.

“Given that the U.S. war strategy depended on the Afghan army’s performance, however, the Pentagon paid surprisingly little attention to the question of whether Afghans were willing to die for their government,” Whitlock wrote.

Clearly, by what unfolded over the last few weeks, the Afghan soldiers weren’t willing to die for their government, or even to put up any resistance. Instead of a determined last stand in Kabul, they laid their arms down and melted away.

What Did the Taliban Gain?

In addition to the entire country, the Taliban now has a sizeable air force that could include more than 130 aircraft. As recently as last month, the Department of Defense (DoD) had pledged to provide even more aircraft, including 35 Black Hawks.

It was just last month too that a Taliban commander had told Sky News that his men had already captured a cache of supplies that including nearly 1,000 small arms, 30 Humvees, 20 pickup trucks and 15 armored vehicles. That is in addition to a shipping container seized by the militants, which reportedly included satellite phones, grenades, and mortars – all bearing labels stating, “Property of the USA Government.”

The good news is that the foreign aid to Afghanistan will come to an end. A stipulation in the fiscal year 2022 (FY22) National Defense Authorization Act, will essentially cut off any aid if Kabul were to fall. With Kabul now in Taliban hands, there will be no more equipment heading to Afghanistan.