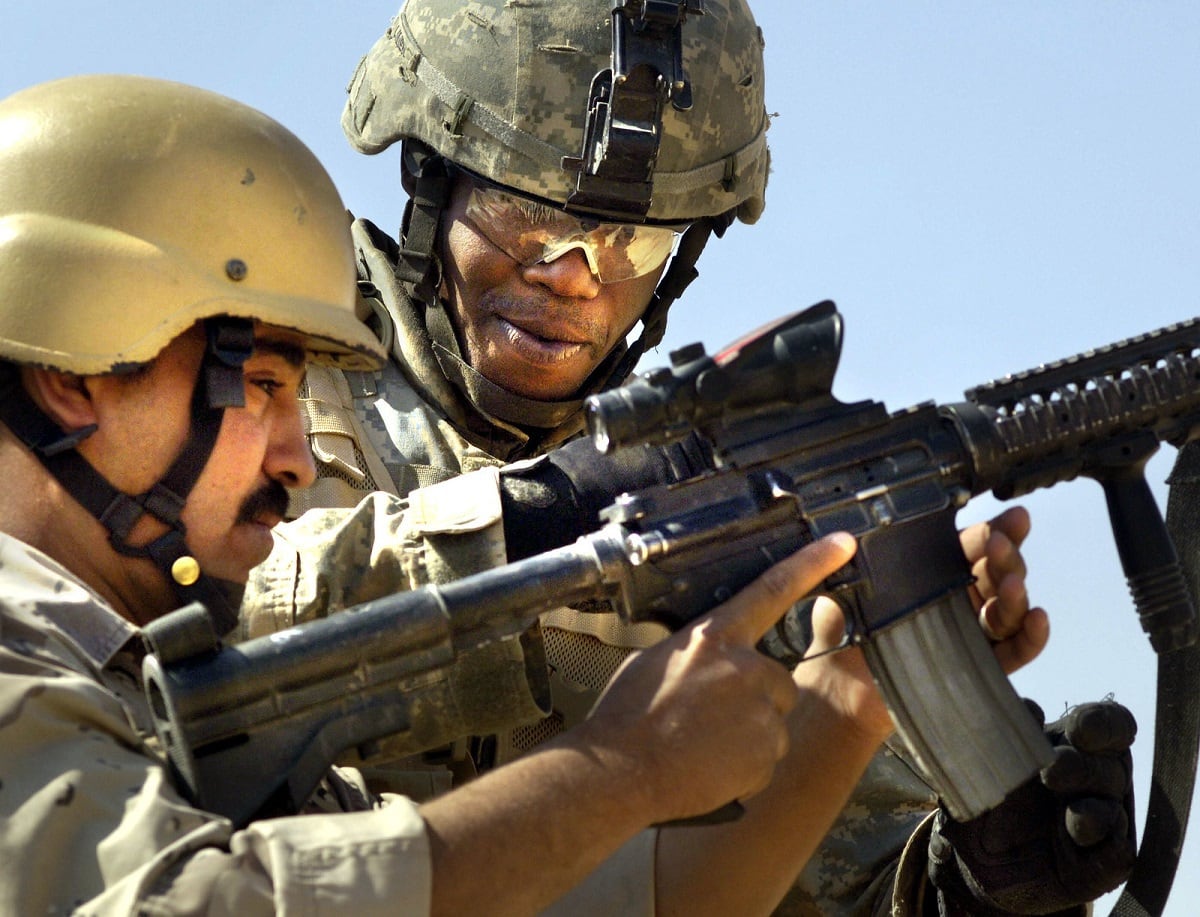 Staff Sgt. Jesse Linen, 1st Brigade Combat Team, 1st Armored Division, shows a member of the Iraqi Army the functions of the M-4 assault rifle during joint weapons training in Tal Afar, Iraq on May 18, 2006. The purpose of the training was two-fold, allowing both U.S. and Iraqi forces to familiarize each other on various weapons systems, and developing espirit de corps amongst both armies. U.S. Air Force photo by Staff Sgt. Jacob N. Bailey. This photo appeared on www.army.mil.

Mental and physical fitness, ingenuity, and grit are among the more important traits a special-operator can have.

Resources and technology are great bonuses that can take a commando to the next level. And yet, according to Congress, foreign language capability is now equally if not more important.

These language capabilities are a key asset in competition that takes place below the level of open conflict, known as the gray zone.

As the US focuses on that kind of competition with China and Russia, Congress is concerned that special-operations troops’ foreign language capabilities have atrophied during the counterterrorism and counterinsurgency operations of the past 20 years.

As a result, lawmakers are pressuring Pentagon to act.

“U.S. Special Operations Forces (USSOF) are an integral part of those military activities carried out below the level of armed conflict and therefore must maintain a high degree of proficiency in those languages critical to enable strategic competition,” the House Armed Services Subcommittee on Readiness said in its markup of the 2022 defense budget.

If the provision makes it into the final budget, which may not pass until the end of the year, the Department of Defense would be required to submit a five-year strategy on how it plans to identify, recruit, and retain individuals in special-operations units with proficiency in critical languages identified by the National Security Education Program.

The globalization of the war against terrorism and the continuous reliance on special-operations troops for almost any contingency or conflict has increased the need for commandos with foreign language capabilities.

Before the September 11 attacks, the Army Special Forces Regiment was the only US special-operations unit with a foreign-language requirement. Because of their unconventional warfare and foreign internal defense mission sets — which both involve training partner forces — Green Berets have to speak a foreign language.

Options include Western European languages like French, Spanish, or Portuguese and others, such as Russian, Mandarin Chinese, or Arabic, often deemed “critical” because they are challenging to learn and in high demand.

Given their long-term investment in that skill, Green Berets are by far the most qualified in foreign languages and have the most robust foreign-language infrastructure.

Every Green Beret candidate has to pass language school at some point — either before or after graduation, depending on the year — and each Special Forces group has a language lab where Green Berets can hone their language skills.

In addition, Special Forces operators are encouraged to take college or online courses, as their language proficiency levels are re-tested every year.

“The command has set up not only classroom training for SF [Special Forces] guys but Green Berets can sign up for the Special Operations Forces Tele-Training System, which allows them to either sign up for a dedicated course or to simply connect with a tutor who can work with them during free hours to improve their language capability,” Steve Balestrieri, a retired Green Beret warrant officer, told Insider.

The US military’s emphasis on fighting with or through partner forces over the last two decades has prompted other special-operations units to pursue foreign language skills in order to be more competitive for missions and, ultimately, to secure greater budgets.

Communicating your way to success

Conventional troops almost always are accompanied by at least one interpreter, so it’s special operators that rely on and use foreign languages the most.

When US special-operations units are trying to build rapport with a partner force, the best way to do it is through a shared language. It’s an elemental part of human relationships, a great way to understand the culture of a country or region, and it shows that American commandos take the locals seriously.

The US military uses the Defense Language Proficiency Test (DLPT) to measure language skill, with four levels — 0 to 3. The amount of training depends on the language, and it can take a few months to more than a year.

Achieving fluency or native proficiency in a foreign language, especially those the Pentagon deems critical, is no joke. So when a Green Beret from Oregon is in Afghanistan and can communicate in Pashto with the local commandos he is advising, he has already done a lot to earn their trust.

“Language training is extremely important for Special Forces teams as a way to make rapport with local partner forces,” Balestrieri said. “Because of the war on terror, a lot of our language capability has atrophied and has to be stressed moving forward.”

Beyond trust-building, language skills ease every interaction US troops have with local forces, from to teaching them how to clear rooms and leading them into combat to consoling them after setbacks.

“In gray-zone conflict, the ability to speak the language and know the culture of the target audience will be a huge advantage for SF [Special Forces] troops, which has been their bread and butter,” Balestrieri added.

During the ’80s and ’90s, the language proficiency of members of 7th Special Forces Group “was a huge part of the success the group had in several different areas,” Balestrieri said, referring to a unit involved in training Central American militaries.

When it comes to language capabilities, the US military has a strategic advantage over most other militaries because of the US’s diverse population.

American troops with native or near-native language capabilities and cultural awareness learned through family ties are an asset in a special-operations environment, where commandos have to often work with a partner force.

So the pool of recruits exists, and it’s up to the Pentagon to ensure that it attracts candidates who can qualify for and complete a special-operations selection and training program.