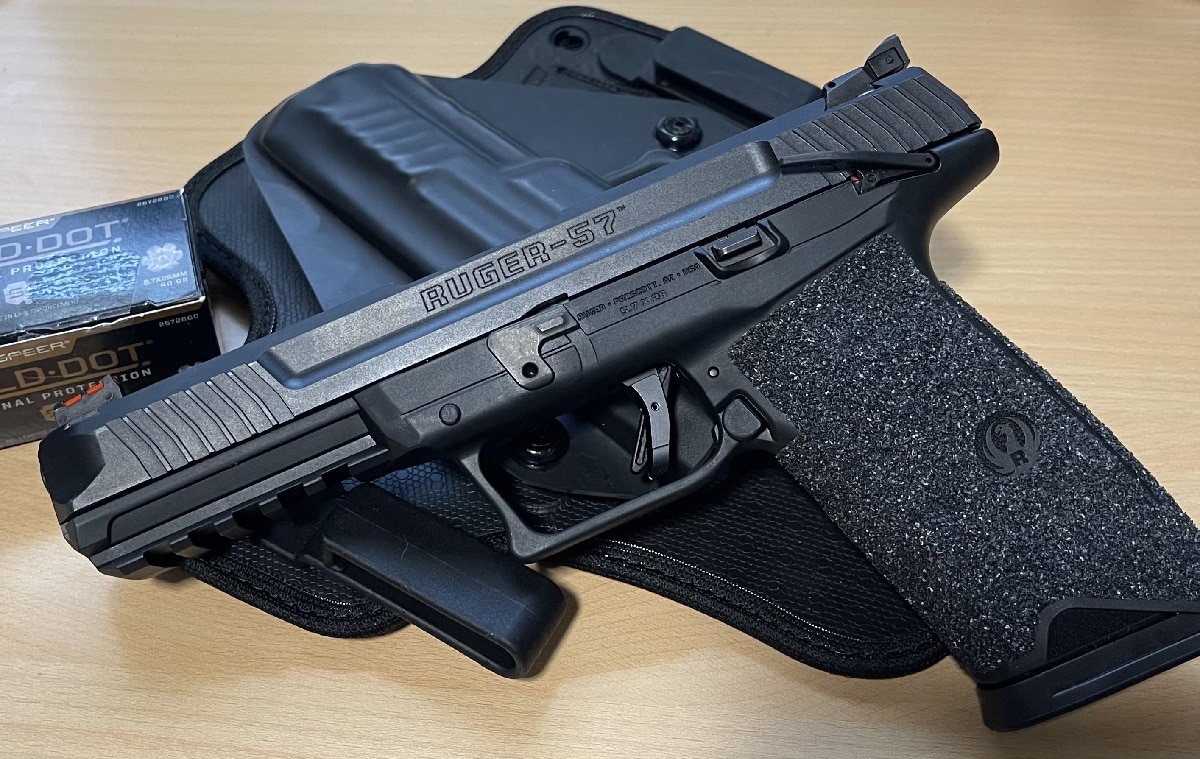 The original FN Five-Seven had a lot of buzz around it since it was the P90’s companion. This earned its reputation as a handgun sitting on everyone’s wishlist, including mine. I have to say, the P90 and Five-Seven are beautiful guns matched only by the incredible 5.7×28 cartridge. If you’re unfamiliar with 5.7, it’s a pistol-sized round with the velocity of a rifle round.

Ruger kind of dropped the 57 out of nowhere and boy was I surprised.  More so when I actually got my hands on one. The Ruger 57 might be my new bed stand gun, maybe even my new winter concealed carry.

We have to talk about the price. It has an MSRP of 850 bucks, which might seem like a lot, but that is a matter of personal preference and finances, of course. The important thing to remember is that at the moment the Ruger 57 is an alternative to the FN Five-Seven, which costs $1200. That’s a cool chunk of change you’re saving if you pick up a Ruger 57.

I really enjoyed shooting this pistol. The recoil is super light; lighter than 9mm in fact. It can actually feel almost comically light, since you’re kind of shooting a .22, just with a lot more speed. This made it easy to hit targets, even at long range. The lighter recoil is definitely something I’m looking for in a carry weapon.

Speaking of carrying, capacity is another thing I’m looking for in my daily carry. The Ruger 57 has that in spade. I selected the 20 round model (which comes with two mags). I have to say I really love having 21 rounds on standby whenever I need it.

I didn’t experience any malfunctions except when my thumb was riding a little high on the safety. It ate up everything I threw at it. That’s not much though, 5.7×28 is really expensive these days! That should be taking into consideration if you’re thinking about picking up one of these guys.  Not to mention it can be pretty hard to find sometimes as well.

The trigger ends up feel light and crisp at a little over 4 pounds. There’s a little bit of take-up, but the reset is clean and clear with a pronounced tactile click.

The looks of the Ruger 57 are one of my favorite things about it. There were some naysayers, but I’m really into it. The grips are slick and the profile is nice and slim, even though the pistol itself is quite large. It also comes equipped with a safety similar to a classic 1911. I’m not particularly fond of safeties on my pistols, but that’s a personal preference and I’m taking away points for it.

I’m not looking to compare the Ruger 57 to the FN Five-Seven. Any which way you cut it, the Ruger 57 is a great handgun to have around. It has that sweet spot mix of fun and genuine practicality. I love breaking it out of the safe and taking it out on the range and am seriously considering bringing it into my everyday carry. Don’t forget about that price either, can’t beat it. Hopefully, we’ll see a rifle to complement it soon.