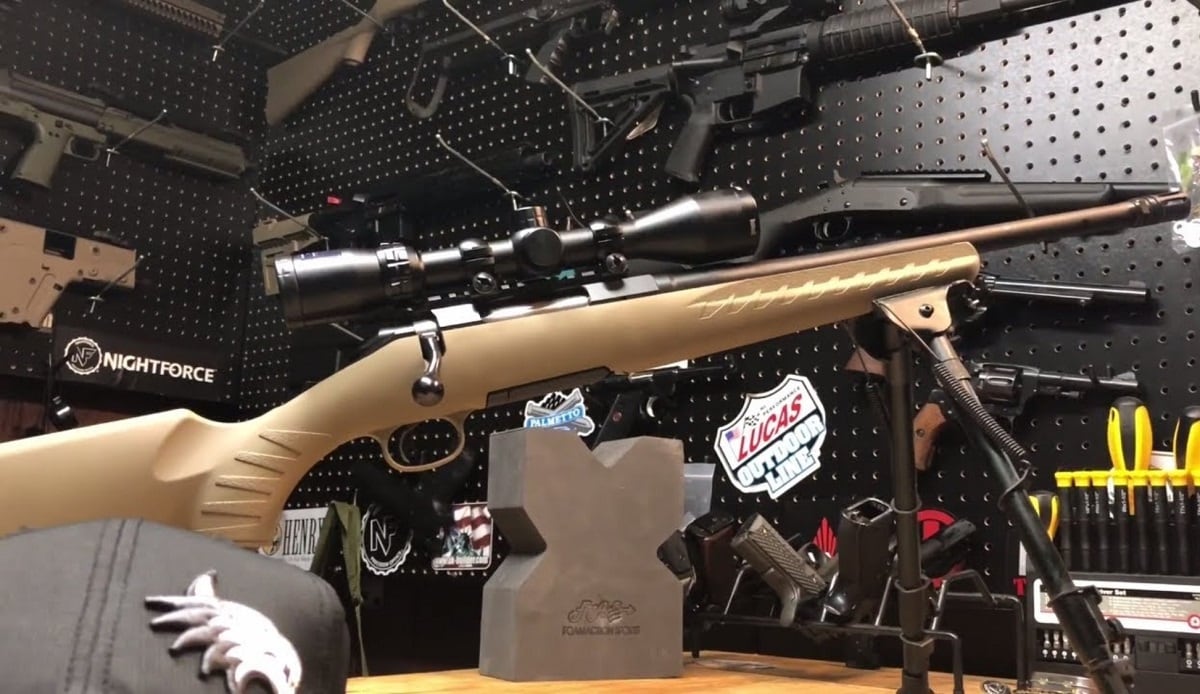 Whether you’re taking fast shots at predators from the cab of a pick-up or shooting cans off a fence rail from 100 yards out, everybody needs a reliable, accurate, and versatile rifle in their arsenal.

While there are a lot of quality rifles on the market today, like the Barrett Multi-Role Adaptive Design (MRAD) Rifle, not everyone has the budget or needs of an expensive, high-precision gun—a more economical and practical option was called for.

Ruger has once again answered that call. Combining their favored .223 Ranch rifle with their American bolt-action line, Ruger has produced an economy rifle that their customers love. Let’s find out why…

By all accounts, the American Ranch rifle is as accurate as its Ruger predecessors. The cold hammer-forged barrel is firmly attached to the action via a barrel nut system and V-notch supports, which leaves the barrel free-floating. Even with heavy rounds, there is very little recoil. It can handle a wide array of ammo—from 50 to 77 grain—and keeps shots at about 1 MOA. There aren’t any built-in iron sights, but there’s a picatinny rail mounted to the receiver to accommodate optics. All of this combined with the low-pressure trigger pull adds up to a stable shot and accurate sight picture.

The three-lug bolt is on the left rear of the receiver. The smaller field of movement found with the 70-degree throw (as opposed to a 90-degree throw) allows for the bolt to clear your scope when loading. As far as I can tell the magazine feeds clean and it won’t jam up on you. Due to the well-crafted barrel, this gun is capable of shooting over 1,000 rounds of fairly cheap shot without any problems, so it’s a great rifle to bring to the range. Ruger makes a simple, reliable, and fast-firing rifle.

The American Ranch rifle is versatile and lightweight. The safety is tang-mounted and easy to reach with either hand, and the ambi mag release is located at the rear of the magazine well. The 16 inch barrel allows for quick maneuvering in a tight space, and I like the way the 5-round magazine sits flush with the stock. There’s sling mounts on both ends of the stock, and the barrel is threaded for sound and fire suppressor attachments. The synthetic stock material feels pretty cheap, but it’s not bad for the price. All together, it’s a pretty neat little rifle. It’s fairly small and lightweight, easy to handle, doesn’t have a lot of kick-back, and allows for scope and muzzle attachments.

The trigger on the American Ranch is one of my favorite aspects. The user-adjustable trigger can be set between 3 and 5 pounds and the trigger guard is integrated directly into the stock. Out of the box, the pull is about 4 pounds, so there might be an initial adjustment until you’re comfortable with the pressure.

This .223 Remington chambered rifle comes with a detachable, 5-bolt, rotary magazine, but you can use 10 and 20 round mags as well. A major selling point with these rifles is that they accommodate AR15 mags. Reloading is easy. The mag release paddle is located on the rear of the magazine well and is designed for ambidextrous use. Load the magazine, slide the bolt to chamber a round, and fire. Ruger also manufactures this rifle in 5.56x45mm, 7.62x39mm, .300 Blackout, and .450 Bushmaster.

With an overall 36 inch length, and a 16.1 inch free-floating barrel, the Ruger American Ranch rifle is pretty compact. It also weighs in at 6 pounds, unloaded, so there isn’t a lot of bulk to contend with. It’s lightweight design makes for a great gun to grab for that quick-shot or to sling over a shoulder for longer treks.

With the low comb and smooth trigger pull, the recoil on this rifle is negligible at best, but there is a rubber recoil pad on the butt of the gun for support. The addition of a suppressor will do even more to suppress recoil effects.

The best part about this rifle is affordability. At around $550.00 suggested retail, it’s a great, cheap, investment for those of you who need a reliable gun on a budget. If you’re budget calls for something less expensive, check out the similar Remington 783 Bolt-Action Rifle.

The American Ranch rifle is definitely the “every man’s” rifle we’ve all been waiting for. Its lightweight handling and maneuverability, combined with its compact design allow for a reliable and accurate firearm that anybody would benefit from owning. This durable (and affordable!) rifle is a must-have for anything from target practice to varmint hunting.