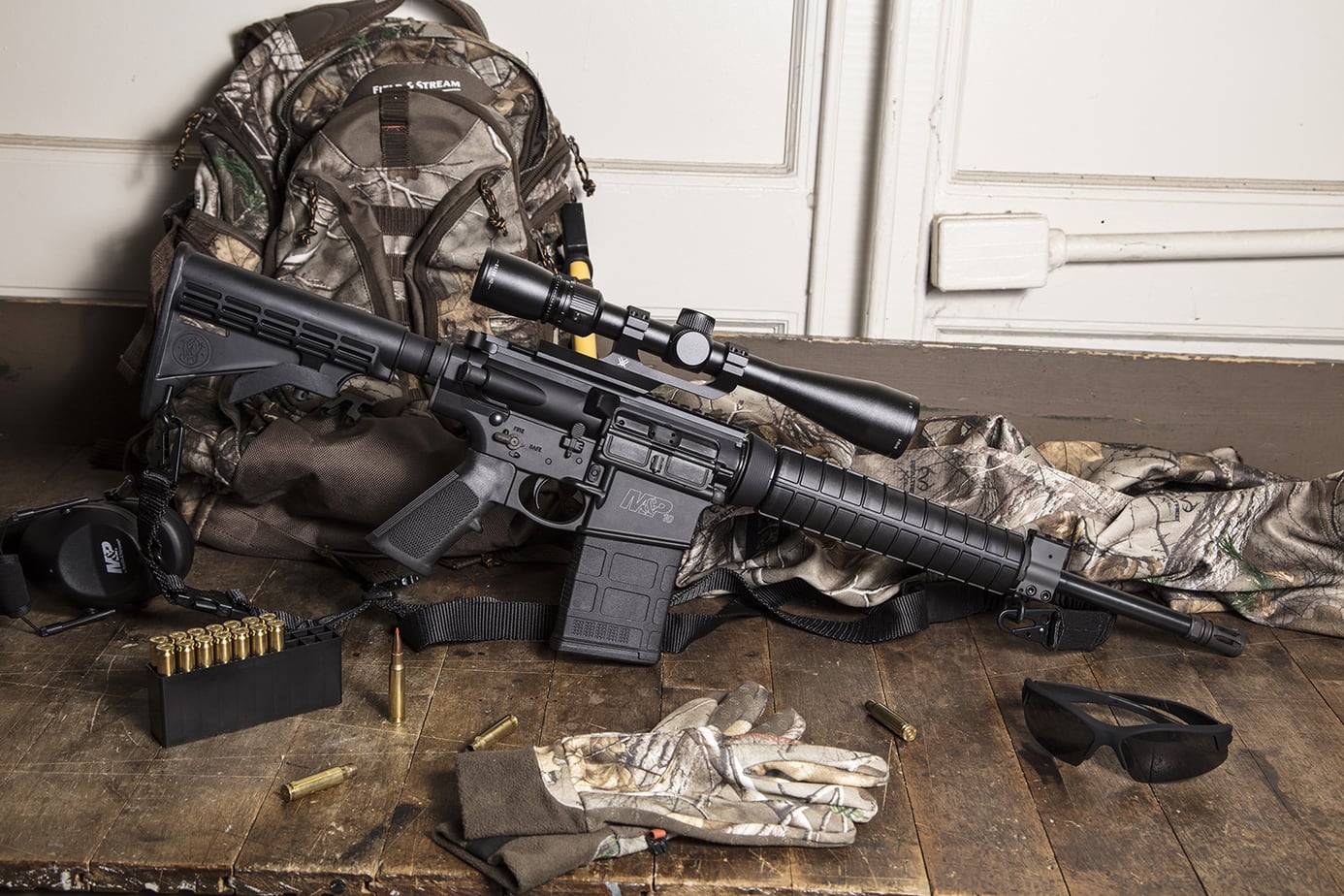 Smith & Wesson’s M&P10 is the new answer to versatility in the world of firearms. Built on the AR-10 platform, the M&P10 is the slick younger cousin of the M&P15, chambered in .308 and this time released in 2013. It’s more powerful and better engineered to prove more reliable than AR-10s like it, and it justifies this brand with every part of its make. But you probably want to find out if it’s right for you in particular; read on for the specifics.

You can assure yourself that the M&P10 is accurate and stays accurate. Built with 5R rifling, this is the preferred competition shooting barrel and is the same finish that U.S. Army M24 snipers use. I’ve used a pretty good variety of calibers in the M&P10, and a constant between all of them is tight groupings. My best shots were ninety yards away with an average grouping of one inch. I found it easy to move from one target to the next and still stay accurate, which is perfect for competition shooters. The general consistency of my accuracy was pretty common, with my biggest deviation being around one and three quarter inch groupings, which is stellar on the accuracy front.

Another benefit of the 5R rifling is that it keeps the barrel much more sustainable. The way the 5R rifling works is that it caters to the shape of the bullet, providing a cleaner fire and a steadier transition to the target. The accuracy of the 5R rifling might not seem much different from your standard rifling, which I can agree with, but the reliability is top notch. Not only does the 5R rifling keep your barrels clear and accurate, it’s also unbelievably easy to clean. I’ve found disassembly easy and in the two years I’ve owned the M&P10, I can count the number of stovepipes I’ve had on one hand.

As I said in the accuracy section, the gun is easy to move and a perfect competition shooter for those who love battle rifles. Beyond that, there’s the customization of the platform. As an AR-10, it’s inherently customizable from its excellent receiver to its solid handguard. I’d recommend putting a sight on the rail or an iron sights, if you’re feeling adventurous. As a competition gun, it works in every facet that it’s supposed to, with consistency and with speed. If you’re looking for close quarters combat however, you may want to look somewhere else; on the AR platform, I can’t suggest anything other than the Bushmaster.

The trigger is where the M&P10 comes to a fault. It weighs way too much. With a trigger weight clocking in at seven pounds, it is a mystery how this made it out of the factory, especially since there are plenty of aftermarket triggers that weigh less and fit just as well. Regardless, you can get AR-10 triggers for cheap and it’s no hassle to replace, which I’m sure you’ll want to do. There’s plenty of room within the trigger guard as well, which is a nice alleviator of a particularly heavy trigger.

I never had a single problem reloading the M&P10. It cycles quick and it gets the job done well. It’s an ambidextrous gun too, so lefties or righties will have no difficulty reaching the mirrored magazine release and safety. Magazine capacities come in at ten in the factory, which is typical of AR-10s. I had no trouble with magazines or reloading quickly, which is of course an important aspect of competition shooting.

The barrel length is eighteen inches, which is short for a .308 rifle. However, this only provides more versatility in aiming wherever you are. The overall length is 36.9 inches, while the weight is eight pounds. This provides a nice, weighty rifle, which I consider a better weight than Smith & Wesson’s fellow M&P15. This is a roughly very similar weight to the H&K .45 Carbine, which is a pistol carbine. That is a lot of bang in a small package.

It definitely kicks less than other rifles of the caliber, and I’d even call the recoil soft at that. Overall, as far as recoil is concerned I had very little problems holding my own with any bullet. This is likely because it’s a gas-powered, semi-auto gun, to which of course recoil is gonna be dampened a bit. If you like a little more kick, check out these bolt-actions.

At $1659.00 MSRP, the M&P10 can seem pretty pricey. For competition rifles, this is around the average value if you want to be able to compete with the best. The gun is seven years old now at this point, and I’ve seen markets for the M&P10 for as low as $1000.

The M&P10 is an advanced rifle for those who love the sport of shooting and for those who like to get competitive with their target practice. I wouldn’t recommend it for a beginner (you should look to the Mossberg Plinkster for that) but if you’re a person looking to get an edge over the competition, you will never go wrong with the M&P10. Just replace the trigger, and you’ll be good to go.