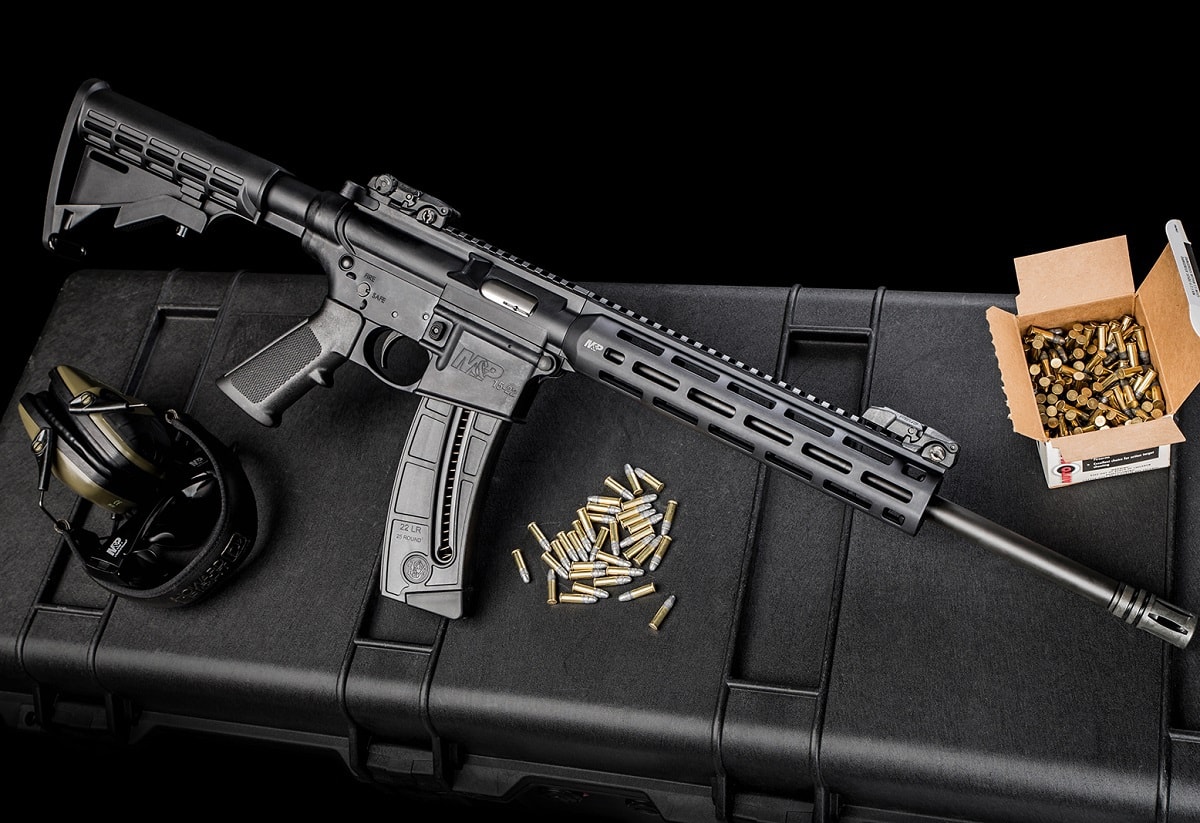 Everyone loves a good .22 LR shooting session. There’s nothing quite like casually sending rounds down range after a long day. What’s better is that shooting a .22 won’t break the bank. This tiny caliber isn’t just for fun either (although that’s what I use it for); it can also be used as a training caliber, usually to mitigate costs of more expensive calibers like 556. The Smith & Wesson M&P 15-22 certainly fits the bill for that. Is it any good? Here are my thoughts in this simple and straightforward review.

The first thing you need to know is that the 15-22 is essentially a 1-1 replica of your standard AR-15. You’ll find the bolt catch, safety, can charging handle to be identical. The only real exception is the lack of a buffer tube. This is because the bolt doesn’t actually go backward as a result of the small caliber.

Since everything is the same, this makes for a really great training rifle. Whether you want to train without burning through cash or introduce your kids to the AR platform, you’ll find exactly what you need out of this rifle. I also found it to be pretty handy for taking care of pests since I can just pop out of the back door and shoot.

Recoil is basically nonexistent as you’d expect. It’s especially not present because of the platform. The trigger feels fine as well, not too heavy but not anything to write home about.

The accuracy isn’t incredible though. It’s fine as far as grouping goes, but I didn’t really feel like it was bang on at longer distances. Closer ranges felt a lot better, but still not perfect. With that being said, it’s a lot of fun to shoot. 22s are almost always fun to shoot (except the Glock 44) though, so I spruced mine up.

I went ahead and slapped on an Aimpoint PRO as well as an ambidextrous safety and a sling.  It’s just a joy to shoot. I set my nephew up with this on range day so he could get the feel of an AR-15 before we introduce him to the real thing in a couple of years. The 15-22 is already equipped with an adjustable stock, so it wasn’t unwieldy for him at all.

The only real downside is that the magazine doesn’t carry your expected 30 rounds. It only holds 25, which isn’t too much of a difference but made me a little disappointed nonetheless. Some states, like Maryland, for example, won’t even allow that–so be mindful of your state laws.

You’ll find the price to be extremely reasonable as well at only $475. There’s worse out there that costs a good bit more. The Smith & Wesson M&P 15-22 is perfectly priced in my opinion, especially if you’re buying it as a training gun. There’s no need to drop a ton of money on a top-of-the-line .22 rifle. Save that for your actual rifle.

I wasn’t looking for anything practical when I bought this gun, but the Smith & Wesson M&P 15-22 is outfitted with plenty of great things. It served me well as a plinker, pest control, and an excellent training rifle that I’ll be keeping around for the kids (and for fun). You can go wrong at the price point either. Under $500 is a steal for this type of platform.

The 15-22 won’t reinvent the game though but it did add a little more fun into my time at the range and at the end of the day, that’s why I bought it. So if you’re into cheap, no-recoil fun, you just might want to take a good look at the Smith & Wesson M&P 15-22.

Richard Douglas writes on firearms, defense, and security issues. He is the founder and editor of Scopes Field, and a columnist at the National Interest, 1945, Daily