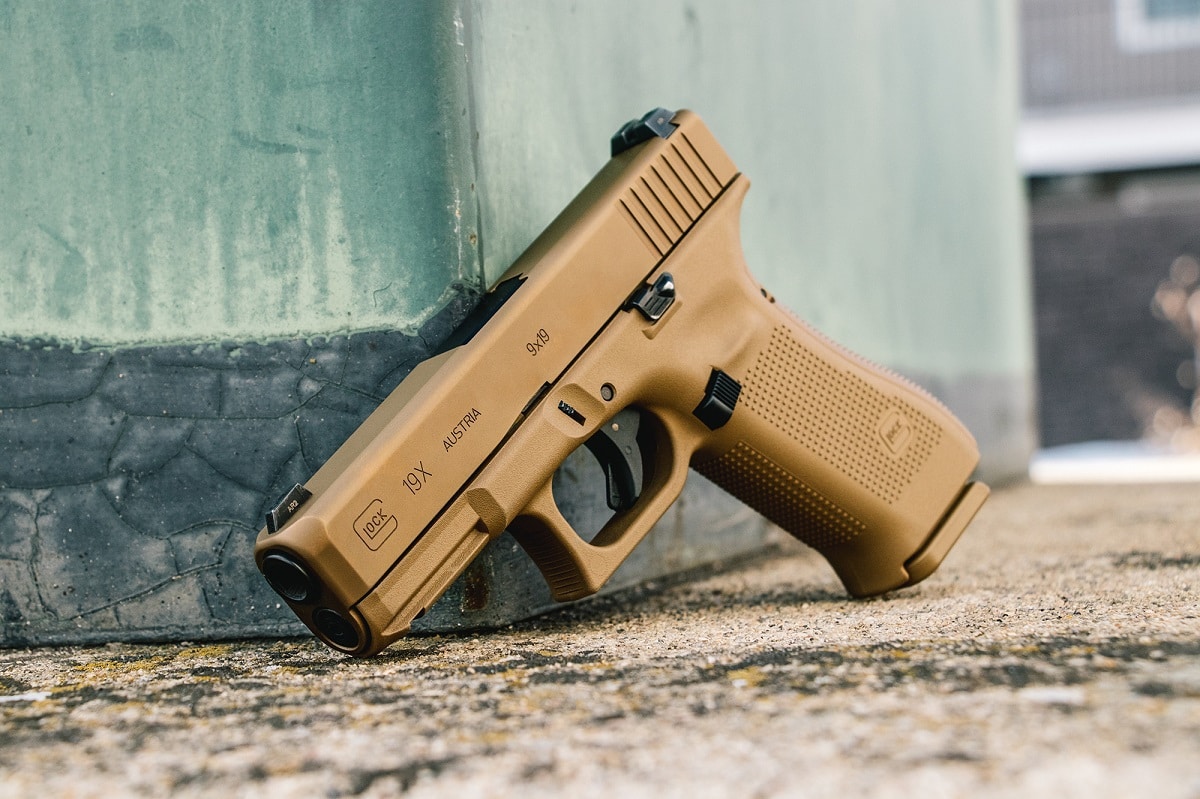 In September 2015 the United States Army and United States Air Force solicited a Request for Proposals (RFP) for a Modular Handgun System that was to be the next U.S. military standard sidearm and replace the Beretta M9 pistol and Sig Sauer M11.

Multiple companies took part in the U.S. military’s XM17 Modular Handgun System (MHS) competition. In the end the Sig Sauer P320 full size model was selected as the M17, while the compact pistol version was picked to be the M18.

One of the other entries in the program was the Austrian-made Glock 19X, the civilian version of firearm entered in the competition. It featured a Glock 19 slide with a Glock 17 frame, and was produced in coyote color instead of the traditional black color that Glock is almost universally known for.

The frame also featured a lanyard loop as well as a front lip in the magazine to make changing magazines with gloves a little easier – a military requirement. That change meant that Glock Gen-5 17-round magazines couldn’t be used in the Glock 19X, but it was seen as a minor tradeoff.

It has been reported that the efforts to simply upgrade the Glock 19 rather than develop a new handgun hurt the Austrian firearms maker’s chances – as the other entrants brought out new designs. The U.S. military clearly didn’t want proven, and it has had to deal with a few “bugs” with its Sig Sauer firearms. The company even settled a class-action lawsuit over the civilian models.

The Glock 19X Was a Hit With Shooters

While the U.S. military opted to go with the Sig Sauer offering, Glock brought its 19X to market. The company introduced the handgun to the commercial market at the January 2018 SHOT Show (Shooting, Hunting, Outdoor, Trade Show). It received multiple notable awards including “Best New Handgun” and “Best Overall Shooting Sports” new item at other distributor shows and events.

It wasn’t just the awards and other accolades that the Glock 19X received. It also proved to be one of Glock’s bestselling pistols, with more than 100,000 sold within the first six months – setting records in the firearms industry.

“By combining the standards of high-level performance and reliability with distinctive design enhancements, this pistol offers proven results and delivers maximum efficiency,” Glock vice president Josh Dorsey said upon reaching the 100,000 sale milestone in July 2018. “These shipping numbers not only validate the earned trust our customers put in Glock, but also, demonstrate Glock’s proven manufacturing and surface treatment capabilities ensuring the company can deliver pistols in the quality and quantity that our customers demand.”