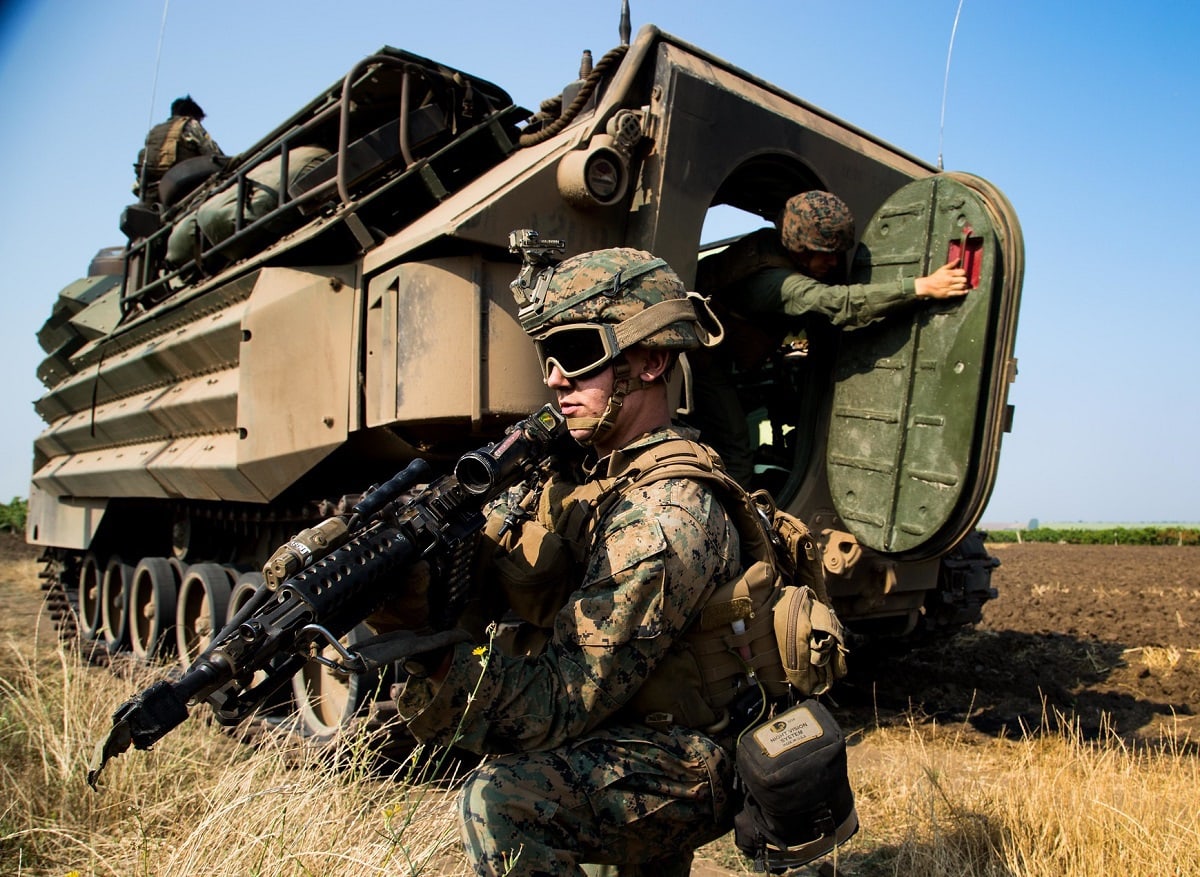 Over 220 U.S. Marines and Ukrainian forces, riding in 15 Amphibious vehicles, participated in an amphibious landing operation in Odessa, Ukraine, July 27.

“You have to understand, George, that Ukraine is not even a country…the greater part was given to us.” Anyone with a map might be perplexed to learn that Vladimir Putin spoke these words to President George W. Bush at the 2008 NATO Bucharest summit. Much to Putin’s ire, NATO had promised that Ukraine (and Georgia) would one day join the alliance. 13 years later, with President Zelensky’s visit to the White House this week and the upcoming Russian Zapad 2021 military exercise that will place Kyiv and NATO on high alert, Ukraine is back in the spotlight. One question at the top of the list is why Ukraine is still not part of NATO?

However bizarre Putin’s assertion may be, there is a lesson within it: Ukraine is not, and is unlikely ever to be, as high a strategic priority for the West as it is for Russia. Allowing Ukraine into NATO would only embolden Moscow to escalate against Kyiv and undermine the alliance’s collective defense. As such, now is not the time for Kyiv’s accession into NATO, and it likely never will be.

NATO’s decision to promise Kyiv eventual membership was a fundamental misreading of Ukraine’s profound strategic significance for Moscow. For Putin’s Kremlin, Ukraine is an indispensable security buffer between it and the West, as it was for the Russian Empire and the Soviet Union before it. Therefore, Moscow perceives Kyiv’s international orientation as existential for Russia’s sovereignty. NATO troops on Russia’s doorstep would provide significant opportunities for what the Kremlin believes is the West’s long-term goal: subversion of Moscow and eventual regime change. Ukraine’s membership in NATO is a redline that Moscow is simply unwilling to tolerate.

If one of NATO’s top purposes is deterring war with Russia, then admitting Ukraine would be profoundly counterproductive. Russia is certainly willing to go to war if it means preventing a nation in its near abroad from drifting towards the West. Just four months after the Bucharest Summit, Moscow launched a war against Georgia, intending to prevent Tbilisi from joining the alliance by disrupting the country’s territorial integrity. Moscow looked to repeat its success in 2014 when it annexed Crimea and launched a low-grade war in eastern Ukraine, hoping to stall Kyiv’s turn towards the West and the European Union. Moscow sees these nations as first-order interests and will use military force to defend them.

The Kremlin would have ample opportunity to escalate its current occupation in eastern Ukraine to make Kyiv’s admission to the alliance untenable. Once NATO offered Kyiv a conditional Membership Action Plan (MAP), the Kremlin would see its window closing. Moscow might calculate that it can present Brussels with a fait accompli by destabilizing Ukraine to derail the membership process. Perhaps Russia would launch a conventional war and send its forces deeper into Ukraine’s heartland; the alliance may be willing to accept Kyiv when Russians only occupy a small portion of the country, but what if it occupies half? Not to mention, a conventional war between Ukraine and nuclear-armed Russia would significantly jeopardize the security of NATO allies on Ukraine’s periphery.

Even if Ukraine reached the point where it was ready to enter the alliance, Moscow’s continued occupation raises thorny questions about Article 5 – NATO’s mutual defense clause. Once Ukraine joined the alliance, would NATO be expected to invoke Article 5 to drive out the Russians from what would be an occupied ally? It seems unlikely that Americans and Europeans would admit a new member if they knew the price was war. Alternatively, Kyiv could accept that occupied regions of Ukraine now belong to Russia and that they no longer fall under Article 5 protection. Neither scenario appears likely or desirable.

In the unlikely scenario that Moscow grudgingly accepted Ukraine as a NATO member, the risk to the alliance’s mutual defense commitment would be significant. Article 5’s principle that an attack on one member is an attack on all has served as a powerful deterrent against Moscow for seven decades. However, the article’s language is not that every member is required to use military force to defend an ally, but only that each member will take “such action as it deems necessary” if NATO invokes Article 5. Thus, Article 5 is fundamentally a political decision for each ally to make. Mutual defense is only powerful if Russia (and other adversaries) believes members would choose to respond militarily.

Why would the West suddenly feel the need to use military force to defend nations in Russia’s near abroad when it refused to fight for Georgia in 2008 or Kyiv during the annexation of Crimea and war in eastern Ukraine? It is not credible that these nations would suddenly be important enough for the West to risk war with a nuclear-armed country. It is questionable whether NATO citizens are even committed to using military force to defend current allies. In 2020, the Pew Research Center found that a median of 50% of citizens across 16 NATO member states said that their country should not defend an ally against Russia. Though the levels of support are likely higher amongst the political and security elites, these numbers should not fill Kyiv with confidence.

Failing to invoke Article 5 in the face of an attack on an ally, especially a conventional one, would shatter the alliance’s credibility. Article 5 must be sacrosanct. If it is undermined in one scenario, it is undermined in all scenarios. Adversaries and allies alike must believe that an attack on a member will result in a forceful response from NATO. Failure to come to Ukraine’s defense would agonize the Baltics and could embolden Moscow, who would rightly wonder whether NATO capitals further West would be willing to fight there if they were not for Ukraine.

Proponents of Ukraine’s membership in NATO correctly argue that Moscow cannot dictate the foreign and domestic policies of nations in its near abroad. Accepting this would premise the return to a system of spheres of influence where only some nations are fully sovereign. But this misses the point of the NATO-Ukraine debate. Refraining from offering Ukraine membership is not a recognition of a Russian veto but a sober assessment that Kyiv’s accession into the alliance would undermine NATO’s primary purpose: to ensure the collective security of its members. Ukraine’s membership in NATO would do quite the opposite by making Russia more aggressive and undermining Article 5.

In 1780, Grigory Potemkin wrote to Catherine the Great, “Imagine that the Crimea is yours… Believe me, you will acquire immortal fame such as no other sovereign of Russia ever had.” Of course, it’s theoretically possible that a more liberalized Russia will seek cooperation with Ukraine and the West one day. In such a scenario, NATO should revisit Ukrainian membership. Realistically, though, those hoping that Putin and his foreign policy are an aberration should learn from Russian history. Even if Russia’s next president is slightly less repressive at home and more restrained abroad, there is no good reason to believe they will fundamentally differ on Russia’s core strategic interests. Though it’s not what President Zelensky and the rest of Kyiv want to hear, it’s time to put Ukraine’s hopes for NATO membership to bed.