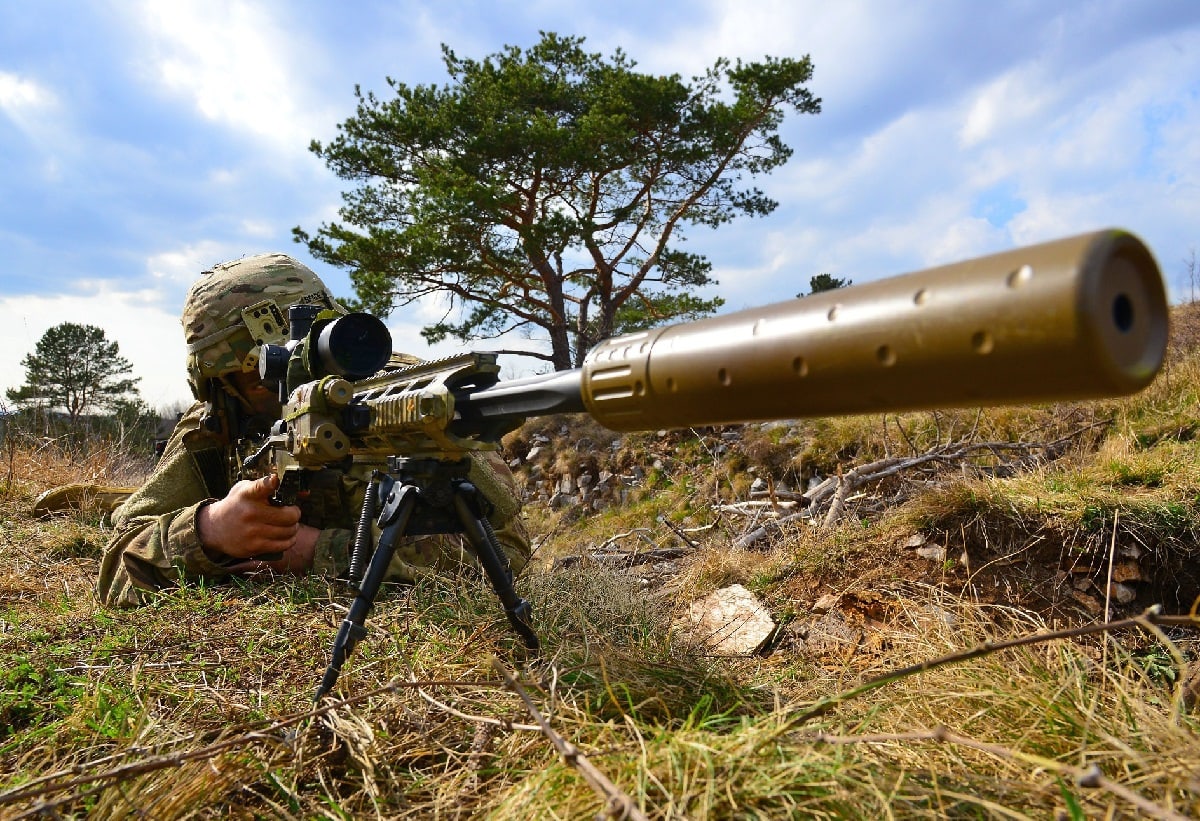 A U.S. Army Paratrooper assigned to 1st Battalion, 503rd Infantry Regiment, 173rd Airborne Brigade, engages targets during sniper training as part of Exercise Eagle Sokol at Pocek Range in Slovenia, Mar. 25, 2019. Exercise Eagle Sokol is a bilateral training exercise with the Slovenian Armed Forces focused on the rapid deployment and assembly of forces and team cohesion with weapon systems tactics and procedures. Exercises such as this build a foundation of teamwork and readiness between allied NATO countries. The 173rd Airborne Brigade is the U.S. Army Contingency Response Force in Europe, capable of projecting ready forces anywhere in the U.S. European, Africa or Central Commands' areas of responsibility.

Millions of Americans became alarmed when they saw a viral video that compared a U.S. Army recruiting advertisement to those made for the Russian and Chinese militaries.

The Russian ad featured tough-looking men doing situps, jumping out of airplanes, and cocking rifles on a snow-covered battlefield. The Chinese ad showed infantrymen firing rounds as they ran next to advancing tanks.

The U.S. Army video was a cartoon about a woman with two moms who marched for equality and joined the Army so she could “shatter some stereotypes.”

Those of us who served in the U.S. military hated the comparison, but not because we oppose diversity. I was in the Navy and Army Special Forces, and I can tell you the U.S. military has been diverse for decades. In a tight spot, none of us care if the trained soldiers next to us are men or women, gay or straight, or how many moms they have. All we want are skilled warriors who love America and have our back when the bullets start flying.

What worried us is a possible lack of focus. It’s becoming more apparent that the leadership is more interested in a military that looks a certain way rather than one that wins wars. Is it so worried about diversity that it might lose sight of the military’s purpose? Are the optics of diversity and inclusion becoming the mission?

U.S. armed forces had the capacity to leave the airport and rescue Americans who were trapped in the city, but they didn’t have permission from the White House. They had the know-how to retake another airport, but the White House didn’t want that. The decision was made not to use our forces to protect Americans.

Giving the State Department the lead was telling. For whatever reason, the administration didn’t want the evacuation of Afghanistan to be seen as a military operation, and the result was one of America’s most embarrassing overseas debacles.

Then, less than two weeks later, we saw additional evidence that America is more interested in optics than battle. The United States Special Operations Command, better known by its acronym, SOCOM, and its subcomponents are home to apex warriors in SEAL Team 6, the Green Berets, and Rangers. These are the toughest of the tough, and they have been inspiring young commando wannabes for decades.

But according to the Military Times, Army Lt. Col. Katie Crombe said that SOCOM’s subcommand, Special Operations Command Central, wants to rebrand itself and recruit people other than these rough-and-tumble guys who kick down doors and who happen to have killed many of America’s top enemies.

“I kind of went back to what we feel about the posters and the stamps, or the branding, of special operations­­—you know, the night vision goggles and the operator with all of the gear going into a building,” she said. “And I thought, you know, that’s not what we need to be advertising fully right now, for us.”

She said the people she wants to recruit are “much different than that,” and suggested that the civil affairs and psychological operations elements of SOCOM might be given more weight.

I served under SOCOM as an Army Green Beret, and this sounds like an attempt to keep our special operations forces out of the fight, or at least out of focus. This would be a startling decision on the heels of 20 years of combat in Afghanistan and Iraq that saw SOCOM forces bear some of the heaviest fighting.

SOCOM’s civil affairs personnel liaise with local populations that are affected by war, and psy-ops personnel use nonviolent means to influence people in a region, typically through efforts like radio broadcasts and dropping pamphlets.

Both are necessary components of SOCOM, but Crombe’s comments sound like an attempt to take the fight out of some of America’s most specialized fighting units under the guise of finding “creative solutions.”

These developments—a video that portrays our military as a social club, the failure to give our armed forces permission to protect Americans in Afghanistan, and the potential softening of our Special Forces—point to a worrying trend.

Our tragic and deadly exit from Afghanistan proved once more than America still needs rough men ready to do violence on our behalf. Let us not eliminate that option in the name of optics.

Jason Beardsley, a Green Beret and Navy veteran, represents veterans, active-duty sailors and their families as executive director of the Association of the United States Navy.

Jason Beardsley, a Green Beret and Navy veteran, represents veterans, active-duty sailors and their families as executive director of the Association of the United States Navy.