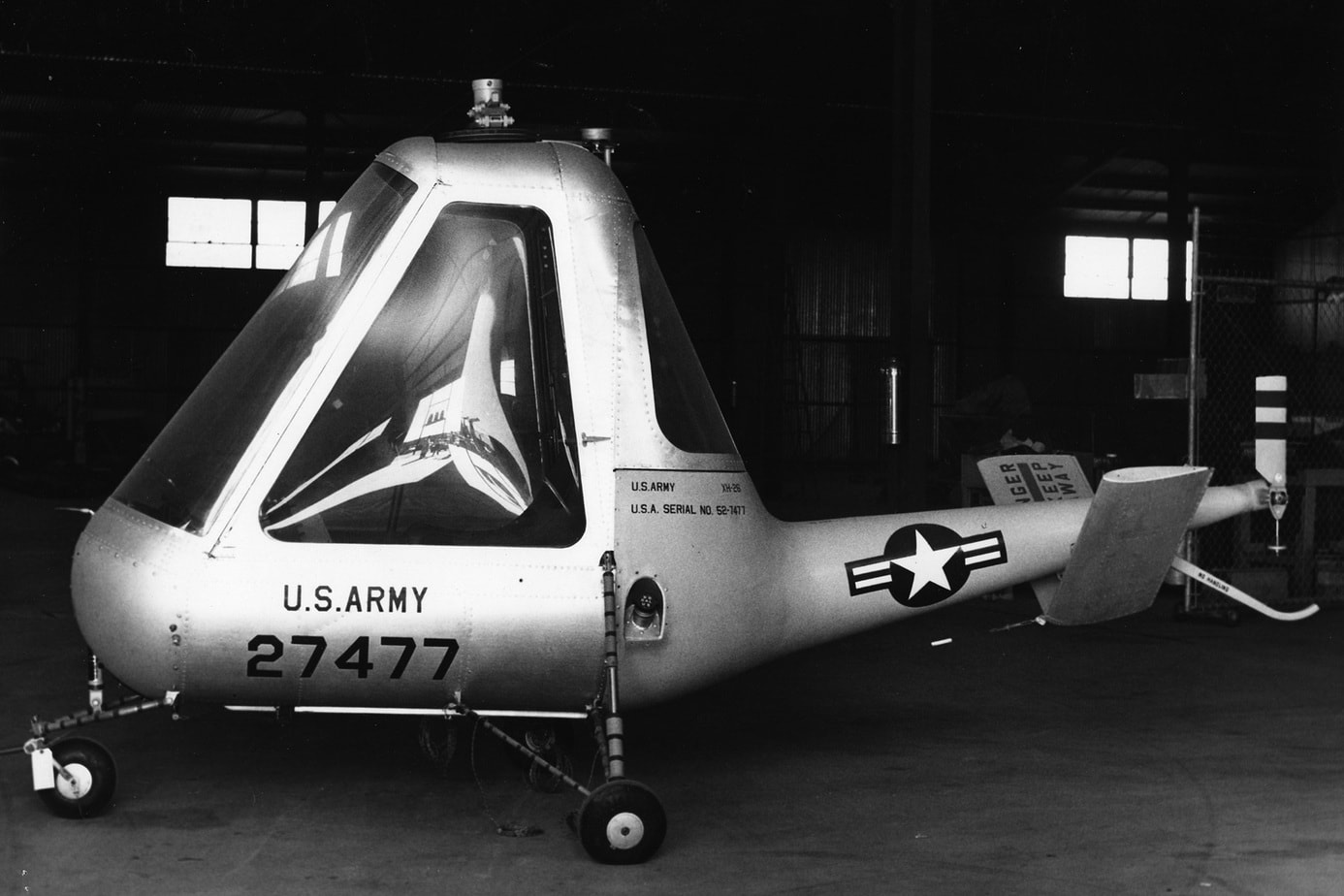 The story of the XH-26: In the 1967 James Bond film You Only Live Twice, the British superspy assembles a mini-helicopter – dubbed “Little Nellie” – and uses it to find a secret Spectre base. The idea of a portable helicopter that could be assembled and take to the air so quickly likely seemed fantastical to audiences at the time. But it was in fact based on a very real aircraft, the Wallis WA-116 Agile, a British autogyro developed in the early 1960s by former Royal Air Force Wing Commander Ken Wallis.

However, nearly 20 years earlier the U.S. military had called for the development of such an aerial craft, which predated Wallis by more than a decade.

In 1951, at the request of the U.S. Army’s Transportation Corps and the U.S. Air Force, the American Helicopter Company produced the XH-26, a one-man, pulsejet-driven helicopter. A total of five of the collapsible, air-droppable observation aircraft were produced. The helicopters were meant to be rugged enough that they could be supplied to troops in the field and quickly assembled with simple tools. The XH-26 could be used for both light observation and as an air-droppable rescue vehicle for downed aircrews who couldn’t otherwise be reached.

Rather than an internal engine like other helicopter, the XH-26 was powered by two 6.75-inch pulsejets on the end of each of its rotor blades. Each of the pulsejets weighed just 16 pounds, yet produced 35 pounds of thrust. Because there were no gears and no engine, the craft didn’t have to be warned up, and it could take off in just 30 seconds. The pulsejets also produced no torque, while a tiny, belt-driven tail rotor was use only to improve the craft’s directional control.

Constructed of aluminum, except for the aft fuselage, which was made from laminated fiberglass, the XH-26 featured a well-glazed, pyramidal-shaped cockpit. When collapsed, the five-foot by five-foot by fourteen-foot container, which weighed less than 300 pounds, could be carried on a trailer that could be towed by a military on-quarter Jeep. That fact, along with its ability to be used in rugged terrain as well the pulsejet engines, soon earned it the craft the moniker “Jet Jeep.” It also used the same fuel as the military’s jets.

While both the Army and Air Force evaluated the five prototype Jet Jeeps, at issue was the fact that the pulsejets produced a considerable amount of noise, and the Army found it unsuitable for its needs. It was suggested that ramjets replace the pulsejets, but finally cost considerations resulted in the programs cancellation.

Today, just two of the five prototypes survive. One is now on display at the United States Army Aviation Museum in Ozark, Alabama, while the other underwent an extensive restoration and it is on display in the Research & Development Gallery at the National Museum of the United States Air Force at Wright-Patterson Air Force Base (AFB) in Dayton, Ohio.