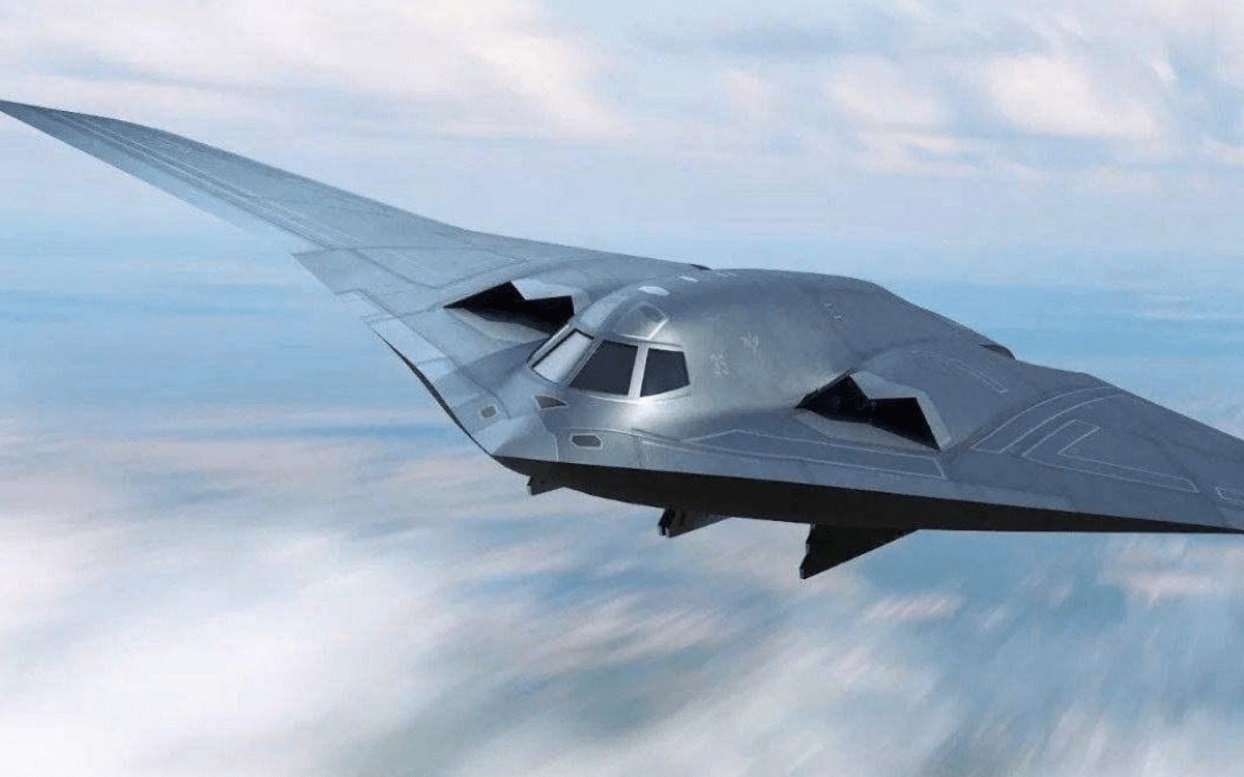 Earlier this year, the Chinese People’s Liberation Army Air Force (PLAAF) shared video footage that may have included some “teaser” footage of its still-to-be officially unveiled Xian H-20 stealth bomber. The Xian’s flying wing profile quickly earned comparisons to the U.S. Air Force’s B-2 Spirit bomber, as well as the upcoming B-21 Raider.

Few details about the Xian have been disclosed or made public, but this week additional photos were reportedly published in the latest edition of Modern Weaponry, a magazine run by the state defense corporation China North Industries Group (Norinco).

The four computer-generated images seemed to show key features of the Xian H-20 including a weapon bay, two adjustable tail wings, an airborne radar at the front and two stealth air intakes on each side. The entire bomber could also be seen covered in a dark gray radar-absorbent material.

As the bomber still hasn’t been officially acknowledged, few photos or even details have ever been disclosed publicly, yet the shape and size of the aircraft is similar to that seen in the promotion video that was posted to state media in January, South China Morning Post reported.

That video was produced by the state firm Aviation Industry Corporation of China (AVIC) to mark the sixtieth anniversary of the founding of the Xian Aircraft Industrial Corporation (XAC), the Chinese defense contractor that is developing the H-20. The January video also followed a similar promotional “sizzle reel” that was released in May 2018, which also included a brief glimpse of a similar-looking aircraft partially exposed from under a sheet.

Various reports have suggested that the H-20 could be equipped with either conventional or nuclear missiles, and would have a maximum take-off weight of at least 200 tonnes and a payload upwards of 45 tonnes. It has been speculated that the aircraft could fly at subsonic speeds and could also be armed with up to four hypersonic stealth cruise missiles.

Based on what is known about the H-20 it is believed that XAC has prioritized stealth and distance over speed – and that could enable the bomber to strike distances that had been previously outside the range of the PLAAF bombers.

“So that means the strategic kind of advantage of that aircraft is that it would be able to strike as what they call a strategic bomber, so it will be able to strike targets a long distance away, perhaps in the second island chain and beyond,” Jon Grevatt, a warplane specialist and Asia-Pacific defense analyst at Janes, told the South China Morning Post this week.

“That means it would threaten US assets and interests in the Asia-Pacific,” added Grevatt. “If the aircraft becomes operational, it has the potential to be a game-changer.”

The Island Chain Strategy, which was first conceived by American foreign policy statesman John Foster Dulles in 1951 during the Korean War, includes a “second island ring” of U.S. bases in Japan, Guam and the Philippines. The H-20, which could become operational by the end of this decade, would most certainly put those bases within range.

Last December, the PLAAF released a video on its Weibo social media account that presented a simulated attack on what appeared to be the Andersen Air Force Base (AFB) located in the United States territory of Guam. It remains the most important U.S. airbase west of Hawaii and the only base in the Western Pacific that could permanently service U.S. heavy strategic bombers including the B-1B Lancer, B-2 Spirit and B-52 Stratofortress. It would be a crucial part of any American military operation in the event of war in Asia.

In the simulated video, a PLAAF H-6 bomber was seen, but perhaps future simulated attack videos could include the H-20.

The Western Pacific island of Guam is six thousand miles from the coast of California, and it has been an American territory since it was ceded to the United States as part of the Treaty of Paris of 1898, which officially ended the Spanish-American War.