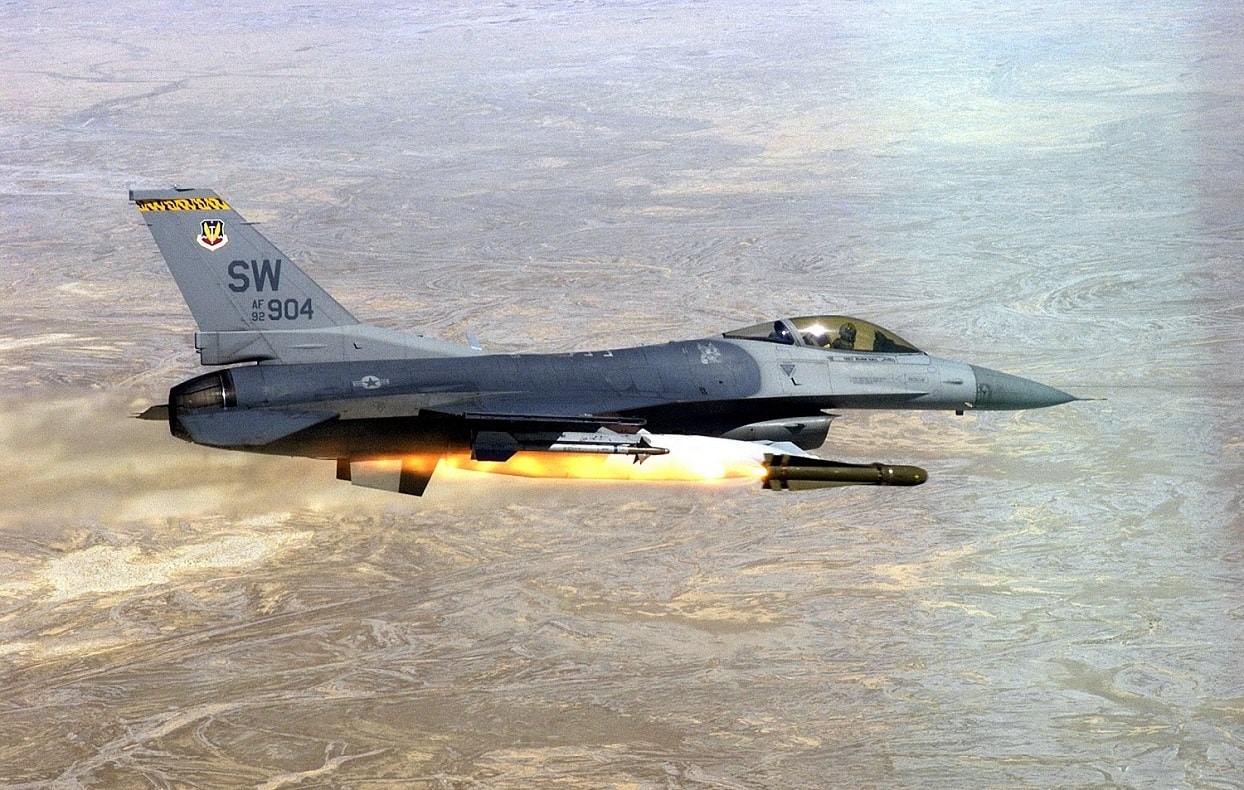 F-16 Fighting Falcon, a Short History: There are approximately 3,000 operational F-16s in service today in 25 countries, a testament to what is easily the world’s most successful, combat-proven multi-role jet fighter ever produced. The fast and agile F-16 Fighting Falcon isn’t just one of the top fighters it is also amongst the most cost-effective. While it lacks the range and payload of the larger twin-engine F-15 Eagle, it also costs less than half – which is why the fourth-generation F-16 has been in use since the 1970s and will likely keep flying for many more years to come.

Since entering service in 1979, this “warbird” has been battle-tested, engaging in more than 400,000 combat sorties and has a combined 19 million flight hours. It has been adapted to complete a number of missions, including air-to-air fighting, ground attack, and electronic warfare. As a combat fighter, the F-16 has proven to be highly maneuverable while its combat radius exceeds that of its potential threats.

Along with the larger F-15 Eagle, the F-16 was one of the world’s first aircraft to withstand higher g-forces than the pilots. These are notable accolades for an aircraft that really began as a technology demonstrator to determine where it was possible to build a versatile fighter that could be cheaper than the F-15.

In 1972 the Air Force’s Prototype Program Office at Wright-Patterson AFB, Ohio, launched the Lightweight Fighter (LWF) program, and the request for proposals (RFP) called for a highly maneuverable fighter with a significant emphasis on reduced weight but also cost. The program wasn’t originally intended to lead to a production aircraft, but rather to determine what was possible at what cost.

While five contractors competed for the LWF two finalists emerged – General Dynamics and Northrop, which would build two prototypes of their respective designs, the YF-16 and YF-17. As the program continued four European members of NATO – Belgium, Denmark, the Netherlands, and Norway – sought to replace the F-105Gs with a lighter and more affordable fighter.

In April 1974 this resulted in a revision to the LWF, which became the Air Combat Fighter (ACF) program and together the F-16 took shape – with final airframe assembly in Belgium and the Netherlands, while components came from all five countries.

The latest version of the Fighting Falcon is powered by a single-engine, either the General Electric F110-GE-129 or Pratt and Whitney F100-PW-229, and while it is a speedy fighter it can pack a serious punch. The F-16 has nine hardpoints for weapons payloads – including one at each wingtip, three under each wing and one centerline under the fuselage.

It has carried a variety of air-to-air missiles including the Lockheed Martin/Raytheon AIM-9 Sidewinder, Raytheon AMRAAM, Raytheon Sparrow, MBDA (formerly Matra BAe Dynamics) Skyflash and ASRAAM, and the MBDA R550 Magic 2; and in April 2004 it was the first fighter to fire the new-generation AIM-9X Sidewinder. Air-to-surface missiles carried on the F-16 include Maverick, HARM and Shrike missiles, manufactured by Raytheon, and anti-ship missiles include Boeing Harpoon and Kongsberg Penguin.

While Lockheed delivered the last F-16 from Fort Worth to the Iraqi Air Force in November 2017, but then restarting the line again in 2019 thanks to foreign demand, this old warbird will be taking to the sky for years to come.