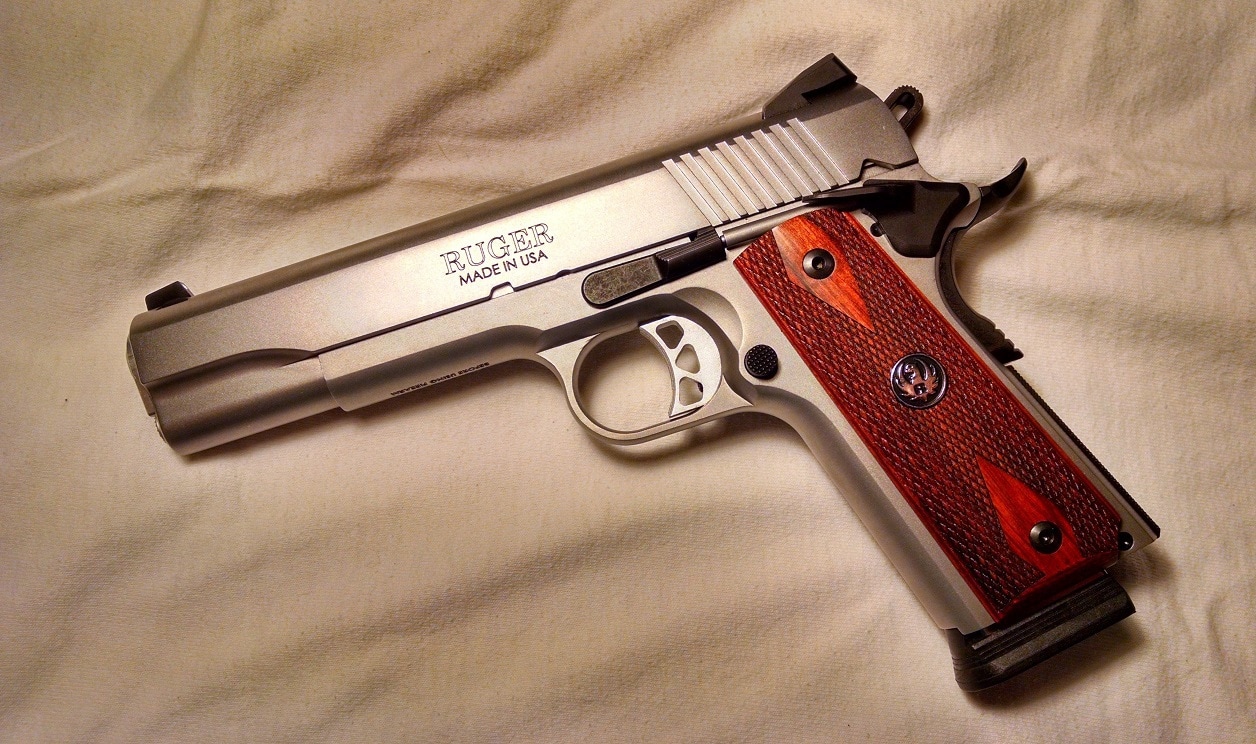 “Two world wars!” they exclaim as I say I just don’t want to carry a heavy gun with only 7 rounds. I like 1911s, don’t get me wrong. I just don’t think they’re particularly perfect for concealed carry. Especially with other .45 ACP pistols with better magazine capacity.

With that being said, I’m always down to shoot a 1911 and too many colleagues have mentioned to me that Ruger makes a 1911, so you just know I had to take a look. Read on to find out if the Ruger SR1911 is outstanding or a flop.

This SR1911 looks like…a 1911. You won’t find any features missing here, nor will you find any new ones. You still get the same style of slide release, thumb safety, grip safety, external hammer, and trigger. This pistol is 1911 to the T. This platform has always been attractive and the SR1911 doesn’t change anything up too much, so they get a pass from me.

What’s fantastic is the trigger. I haven’t ever really shot 1911 that didn’t have a crisp trigger. Ruger upholds this with panache. 1911 triggers smack striker-fired triggers all over the place. I couldn’t have asked for a better trigger. What’s more, is that these clean trigger pull allow for some solid accuracy.

The accuracy of this pistol is top-notch. I actually found that I was outshooting myself compared to when I shoot my Glocks. Pinpoint groups at sub-15 yard distances weren’t uncommon and tight groups were frequent and easily attainable. I say the smooth shooting and accuracy are my favorite aspects of the Ruger SR1911. Practicality is a completely different story, especially for concealed carry.

The reliability is also noteworthy. I experienced no malfunctions over about 500 rounds of various brands of ammo. Some people have pickier pistols, but mine didn’t have any such problems. I was primarily pushing through super cheap ammunition too.

I will not carry 1911s, at least full-size ones, period. They are too large, too heavy, and too lacking in the capacity for me to really consider it. Those are the only reasons. The SR1911 is just too big for concealed carry. It prints like crazy especially here in the South where it really only gets cold enough to wear big jackets in the dead of winter. The SR1911 is not sitting comfortably in shorts and a t-shirt.

I like to bully 1911s, but at heart, I really do enjoy them. Their design is clean and classic, but it’s just not a practical pick for me and the prices make my wallet cower in fear. They’re just not for me. The Ruger SR1911 doesn’t change any of that, but it sure is fun to shoot and it won’t take up a fat percentage of your paycheck. The smooth action and accuracy make this a blast to take to the range. It doesn’t reinvent the wheel, it’s just another version of the wheel.