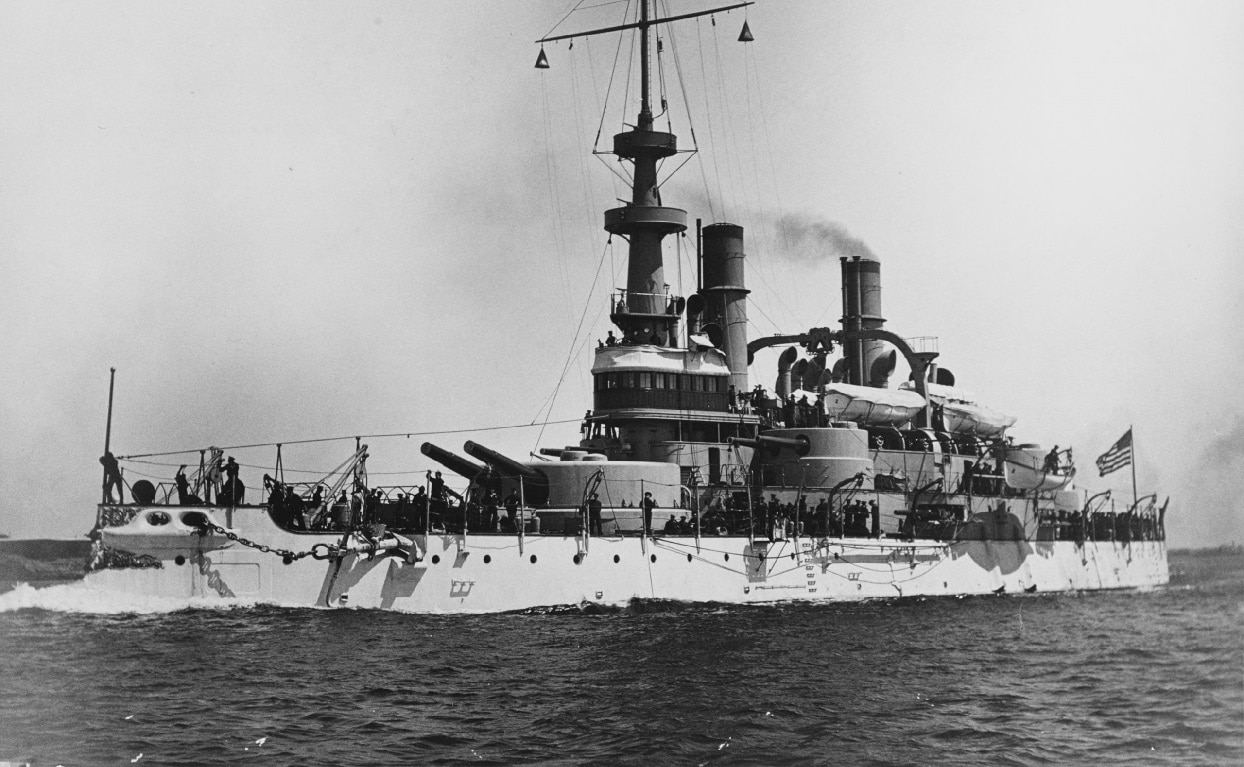 Albeit not as famous as the USS Arizona or USS Missouri, the USS Indiana (BB-1) has the notable distinction of being the United States Navy’s first battleship. Authorized in 1890, the 10,288-ton warship was built by William Cramp & Sons in Philadelphia, Penn. and was officially commissioned in November 20, 1895.

Even by the standards of the day, she was a dimensionally compact and was a small battleship, yet heavily armed and armored. The warship was actually designed for coastal defense, not a direct engagement on the high seas – and in fact, her decks were not considered safe from high waves on the open ocean. As a result, she spent her entire career in the Atlantic area, and during the Spanish-American War, USS Indiana operated in the Caribbean, and participated in the July 3, 1898 naval battle off Santiago, Cuba – one of the two major naval engagements of the conflict.

Despite any shortcomings, including the limited range, Indiana was the lead ship of a three-strong class of warships that also included USS Massachusetts (BB-2) and USS Oregon (BB-3). While it may seem odd today that Congress would authorize a battleship that lacked the ability to cross the ocean, under the direction of a special board that was created in 1890 recommended that the Navy update the fleet so that it could defend adequately against the imperial world powers, as well as by the nations of South America – several of which actually had far larger navies than the United States!

The board realized the need for battleships that had long-range cruising capability, yet, many members of Congress supported a policy of “isolationism” and opposed long-range battleships as such warships were not intended strictly for coastal defenses. Thus to appease the isolationists, the Indiana-class was designed as a “Sea-going coast-line battleship.”

Indiana was originally powered by four Scotch double-ended boiler units, which fed twin sets of triple expansion steam-driven engines, driving two shafts under stern. Maximum speed in ideal conditions was just 15 knots, yet the ship had an impressive range of 4,900 nautical miles, thanks to the capacity of the coal bunkers, which could allow her to cross the ocean without recoaling. In 1905, the propulsion as upgraded to eight Babcock & Wilcox boiler units, which could deliver 9,000 horsepower, which slightly improved the speed and range.

The small battleship was tough as well, and her armor thickness and size of the main battery exceeded that of any other U.S. warships in the fleet. Original armament consisted of four 13-inch (330mm)/35 caliber guns in two twin-gunned primary turrets – along with eight 8-inch (203mm)/35 caliber guns in four twin-gunned turrets, as well as four 6-inch (152mm) guns in a single-gunned turret. In 1908, the four 6-inch guns were removed, and two years later a dozen 3-inch (76mm) guns were added.

While the ship served with distinction in the Spanish-American War, she operated with the Naval Academy Practice Squadron, and then served as a training ship during the First World War used for crew and gunnery training and position off Tompkinsville, Staten Island.

She was decommissioned in January 1919, and her name was changed to “Coastal Battleship #1” a few months later, and was employed as a target in ordnance tests. She was sunk in such a test in November 1920, and wreck was sold for scrapping in March 1924 – a sad fate for America’s first battleship.