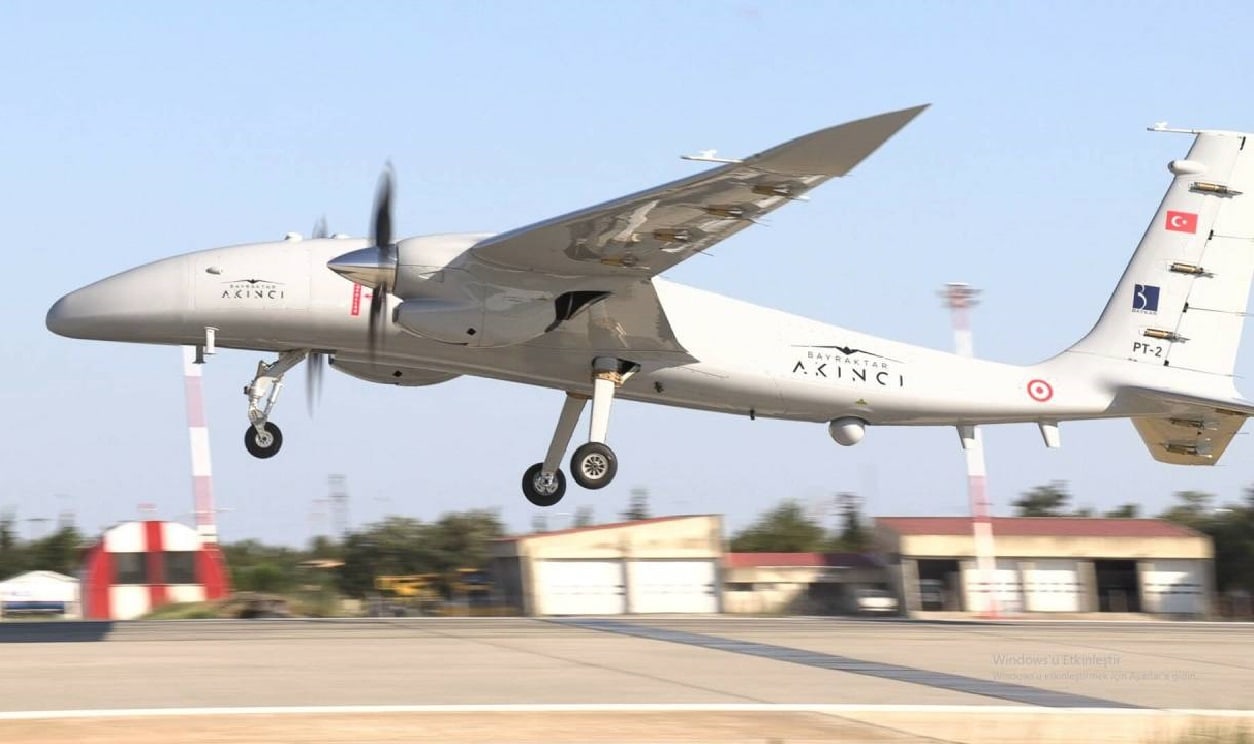 “I believe that Akıncı can become a strategic tool for Ukraine as well, that we will see it in the Ukrainian sky as well,” Haluk Bayraktar, CEO of Turkish drone manufacturer Bayraktar, told  Ukrainian defense publication Defense Express (English translation here). “We are actually ready for this. We constantly talk about Akıncı at our meetings, because on this platform there is a Ukrainian-made engine.”

The Bayraktar company makes both the TB-2 and the Akinci. The TB-2 is a single turboprop, medium-altitude long-endurance (MALE) drone with a 39-foot-wide wingspan and a maximum altitude of 24,000 feet. It can be armed with up to four laser-guided missiles. In September, a Ukrainian TB-2 used a missile to destroy an artillery piece – operated by Russian-backed separatists in the Donbass region of Eastern Ukrain that was firing on Ukrainian forces, according to Ukrainian and Turkish media.

With a 65-foot-wide wingspan, the twin-turboprop Akinci is about the size of the U.S. MQ-9 Predator.

In addition to a suite of radar and optical sensors, the Akinci will pack an even bigger punch than the TB-2.

“The Akinci will carry a variety of weaponry, including the same Smart Micro Munitions (MAM-L) its predecessor the Bayraktar TB2 does in addition to general-purpose bombs,” according to Forbes. “It can also reportedly fire Turkish-built Bozdogan [Merlin] and Gökdoğan [Peregrine] visual range and beyond visual range air-to-air missiles. The Akinci can even launch Turkish-built Roketsan SOM long-range air-launched cruise missiles that can hit targets up to 150 miles away.”

With 100,000 Russian troops massing on the Ukrainian border amid fears that they are preparing to possiblyy invade Ukraine, it is not implausible that the Akincis – if Ukraine does buy them — could be used against Russian forces. At the least, they could be used to strike Russian-backed separatists.

As with U.S. Predator drones, the TB-2 and Akinci are relatively slow aircraft that aren’t meant to operate in the face of heavy air defenses. Though Turkish- and Israeli-made attack drones were used with devastating effect by Azerbaijan against Armenia during the 2020 Nagorno-Karabakh conflict, Russia has more and better equipment to shoot down or jam drones.

But the better question is whether Russia would pressure Turkey to quash the sale. Though Turkey is a NATO member, it has bought Russian S-400 anti-aircraft missiles, which resulted in Turkey being ejected from the U.S. F-35 program. But speaking of the earlier deal to sell TB-2s to Ukraine, a Turkish diplomat told Defense News in September that he didn’t expect Russia to block drone sales.

“First, the Turkish systems are no gamechanger in any Russian-Ukrainian conflict,” the diplomat said. “Then we have our own private agenda with Russia. “The Russians will not want to ruin their strategic defense cooperation with us for the sake of a few weapons systems our companies sell to Ukraine.”

On the other hand, who would have expected Turkey – the linchpin of NATO’s southern flank during the Cold War – to be thrown out of a U.S. fighter program? Russian troops on Ukraine’s border already signal Moscow’s displeasure with Western arms sales – including U.S.-made Javelin anti-tank missiles – to Ukraine. Russia may yet take a harder line over Turkish combat drones in Ukrainian hands.