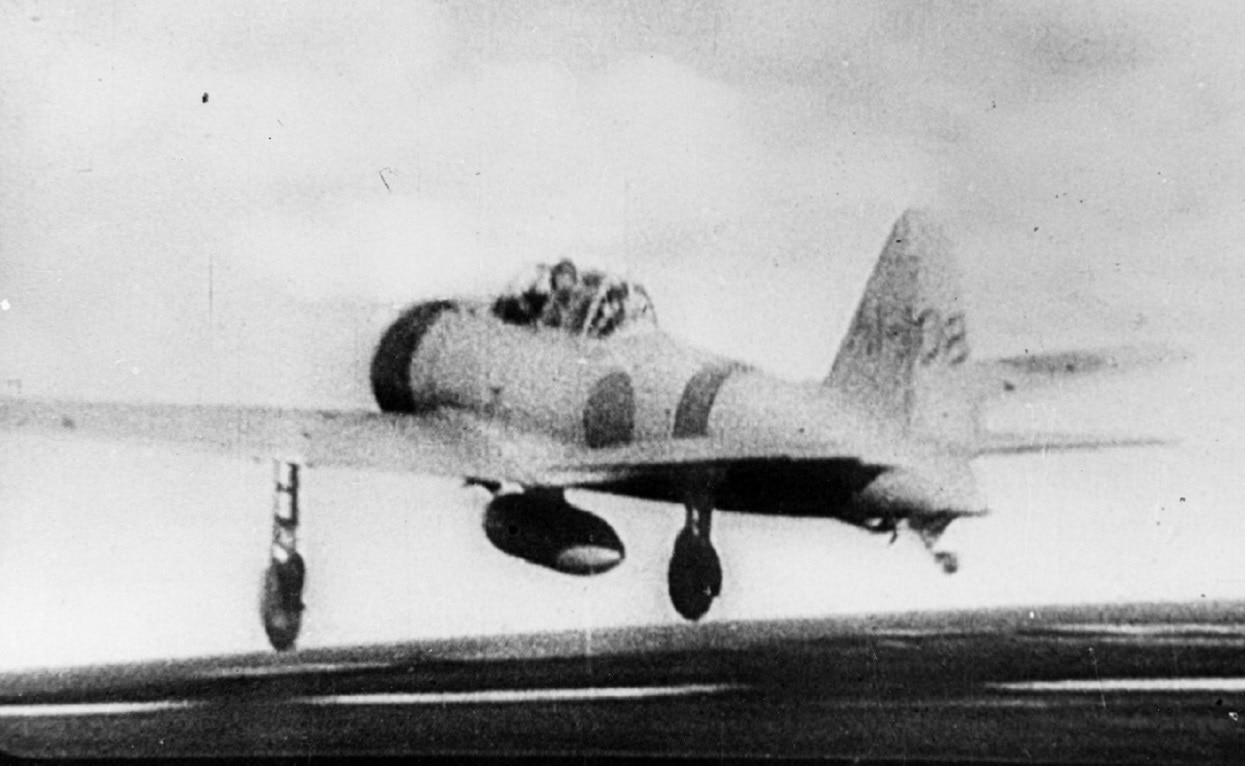 Americans have Alfred Thayer Mahan to blame for the Japanese attack on Pearl Harbor. They also have Mahan to thank for the attack’s failure. The Imperial Japanese Navy (IJN) could have landed a crippling strategic blow against the U.S. Navy’s Pacific Fleet, demolishing infrastructure indispensable to fleet operations in the distant Western Pacific. Instead, Japanese aviators concentrated their bombs, torpedoes and gunfire on U.S. battleships moored at Ford Island.

The results were spectacular but ephemeral. The raid accomplished little apart from delaying an American counteroffensive a few months and firing popular resolve in the United States to unleash that counteroffensive. If you decide to smite a sleeping giant, you had better kill him.

Both the strategic decision to launch the assault and the tactical decision to forego strikes on the infrastructure supporting the American fleet derived part wise from how Imperial Japanese Navy magnates read their Mahan. The Pearl Harbor raid, then, is a parable about the hazards of reading bits and pieces from works of military history or theory, or cherry-picking the bits that seem to ratify preconceived ideas or preferences.

Skip parts of a treatise and you garner only part of its wisdom—and maybe not the part most relevant to your cause. Theory exists to guide strategic thought. It can deform strategic thought if misused.

Japanese strategists had long been avid consumers of Mahan’s writings, chiefly his masterwork The Influence of Sea Power, 1660-1783 (1890). In fact, America’s “evangelist of sea power” described the Japanese as his most ardent readers. He related having carried on “pleasant correspondence with several Japanese officials and translators” with regard to nautical exploits. None—not seafaring Americans, Britons or Germans—had paid “closer or more interested attention to the general subject.” In fact, Mahan credited the Japanese triumph over the Russian Navy during the Russo-Japanese War (1904-1905) to IJN mariners’ study of his works.

“As far as known to myself,” he recalled, “more of my works have been done into Japanese than into any other one tongue.” It seemed the IJN had been an attentive student. Victories at the Battle of the Yellow Sea (August 1904) and the Battle of the Yellow Sea (May 1905) confirmed it. Tokyo had vanquished China’s and Russia’s navies by then—and made itself master of the Western Pacific.

The U.S. Navy constituted the only remaining barrier to complete Japanese mastery. The United States had ensconced itself in the Far East after occupying the Philippine Islands in 1898. Forces stationed there could conceivably thwart Japanese regional supremacy. Recognizing that, Japanese strategists set about planning how to overcome the U.S. Pacific Fleet, on the assumption the fleet would steam westward from the U.S. west coast or Hawaii to reply to an attack on the Philippines.

As Professor Sadao Asada observes, they alighted on the concept of “interceptive operations.” The basic idea went something like this: “let the far enemy come to you, do things to weaken him on his way, and then trounce him when he arrives at your door.”

Japanese officers applied the Tsushima Strait template to a new foe. Late in 1904, the Russian tsar had dispatched his Baltic Fleet to the Far East in a bid to revivify St. Petersburg’s flagging fortunes at sea. Enfeebled by an epic 18,000-mile voyage through the Atlantic and Indian oceans and the China seas, the Baltic Fleet arrived on the scene of action—only to be met and smashed by a freshly refitted IJN Combined Fleet prowling near its home ports.

IJN strategists envisioned reprising and improving upon this approach during a U.S.-Japan naval war. Japan would seize Pacific islands as forward bases to mount pinprick attacks against the U.S. Pacific Fleet. Warplanes would venture forth from island airfields to attack the fleet while submarines lurking in the waters nearby torpedoed warships that came within reach. Interceptive operations stood little chance of halting the American advance altogether. But intermittent assaults would grind down the Pacific Fleet bit by bit—granting the IJN battle fleet a fighting chance when the two forces finally collided in the Western Pacific.

Operational commanders confront a basic choice: whether to make occupying physical space or defeating hostile forces their chief goal. Alfred Thayer Mahan exhorts naval commanders to do the latter: go after the enemy fleet. For example, he critiqued British and French naval strategy in the Caribbean Sea during the War of American Independence. Both combatants craved the Caribbean islands, both for naval bases and for their economic worth. Yet Mahan chided commanders who made the islands their immediate objective.

Crush the enemy fleet, he insists, and territory will fall into your hands afterward. Neglect the enemy and you may see territorial gains you achieve now reversed later.

As it shaped up during the interwar decades, then, Japanese naval strategy seemed like vintage Mahan. It designated the U.S. fleet as the IJN’s top strategic priority. That did not change in early 1941 when Admiral Isoroku Yamamoto thrust his scheme for an offensive strike at Pearl Harbor upon a skeptical military regime in Tokyo. Yamamoto believed sinking the U.S. Pacific Fleet at the outset of war would leave Pacific territories to wither on the vine, bereft of their main defender. Japanese forces would gather them up at their leisure.

Mahanian logic thus prevailed in Imperial Japanese Navy circles. Interceptive operations envisioned awaiting the U.S. Pacific Fleet before landing a decisive blow; Yamamoto’s plan called for striking that fleet before it could sail. Either way, the fleet remained the IJN’s principal target. Mahan would salute Tokyo’s strategic vision even though his own navy now lay in IJN crosshairs.

Or would he? Japanese sea warriors had a love affair with warmaking implements—dreadnoughts in particular—and with tactics. They tended to slight the grander strategic considerations on which Mahan also lavished attention in his works. The sea-power evangelist likens sea power to a chain, or rather to two parallel chains, one mercantile and the other naval. (He conflates the two.) Industrial production at home yields goods for sale, merchant shipping transports those goods across the sea, and they are sold in foreign markets. Production, commercial shipping and foreign seaports comprise the three links in the nautical supply chain.

Much the same process operates on the naval side. Shipyards manufacture warships, warships control sea routes connecting the home country to important commercial regions, and warships put into naval bases along distant shores for fuel, stores and upkeep. Industry, fighting ships and forward naval stations are the three links in the naval supply chain. Fracture any link in either chain and the whole seaward enterprise goes flying apart.

A country with no shipyards—or whose yards are wrecked through enemy action—cannot sustain a navy to act as the guardian of merchant traffic. But, says Mahan, even a vibrant industrial-age fleet resembles a flock of “land birds, unable to fly far from their own shores” unless officialdom obtains access to way stations, refueling facilities between a ship’s home port and faraway destinations. Way stations like the Hawaiian Islands, Midway Island, Wake Island, and Guam. Constructing that logistical network, contends Mahan, represents one of the “first duties” of any government that entertains high-seas ambitions.

Yamamoto & Co. neglected the logistics-oriented links in the sea-power chain and focused on shattering the naval link. The template worked at Tsushima because Russia had no more fleets to send. Had the U.S. Pacific Fleet in December 1941 been the sum total of American sea power in the Pacific, that strategic choice may have made sense. But another, bigger, badder U.S. Navy was building back home under the Two-Ocean Navy Act of 1940 and would start arriving in the theater by the spring of 1943. So at most the Pearl Harbor attack, as Yamamoto conceived of it, could win imperial Japan a reprieve to carry out its rampage across the Pacific and Indian oceans.

But had Japanese aviators aimed their fire at dockyards, fuel dumps and other support infrastructure on Oahu, they could have meted out far more grievous damage than they did. No less a personage than Admiral Chester Nimitz pointed out their blunder. The IJN hurt the U.S. Pacific Fleet badly. That central link in the chain, the navy, absorbed severe stress. But American sea power, broadly understood as Mahan intended it, could shrug off the shock. Indeed, the Pacific Fleet wrought a turnabout in its fortunes a mere six months later—at the Battle of Midway—and made use of that very infrastructure while doing so.

“Land birds” could never have fought a major fleet action like Midway in the Central Pacific. Japanese naval chieftains, it seems, skimped on the sections of Mahan’s writings that explain how to amass the sinews of sea power—or cut their antagonists’ sinews. They skipped to the good parts about sea combat—and ended up paying dearly for being less-than-attentive pupils. They were too Mahanian and not Mahanian enough at the same time.

Military folk join the service to do battle, a tactical pursuit. Ultimately, though, senior military folk must take account of larger things—lest they suffer the same fate Japan suffered after its failure at Pearl Harbor. That means digesting more than just the good parts.

James Holmes is J. C. Wylie Chair of Maritime Strategy at the Naval War College and coauthor of Red Star over the Pacific