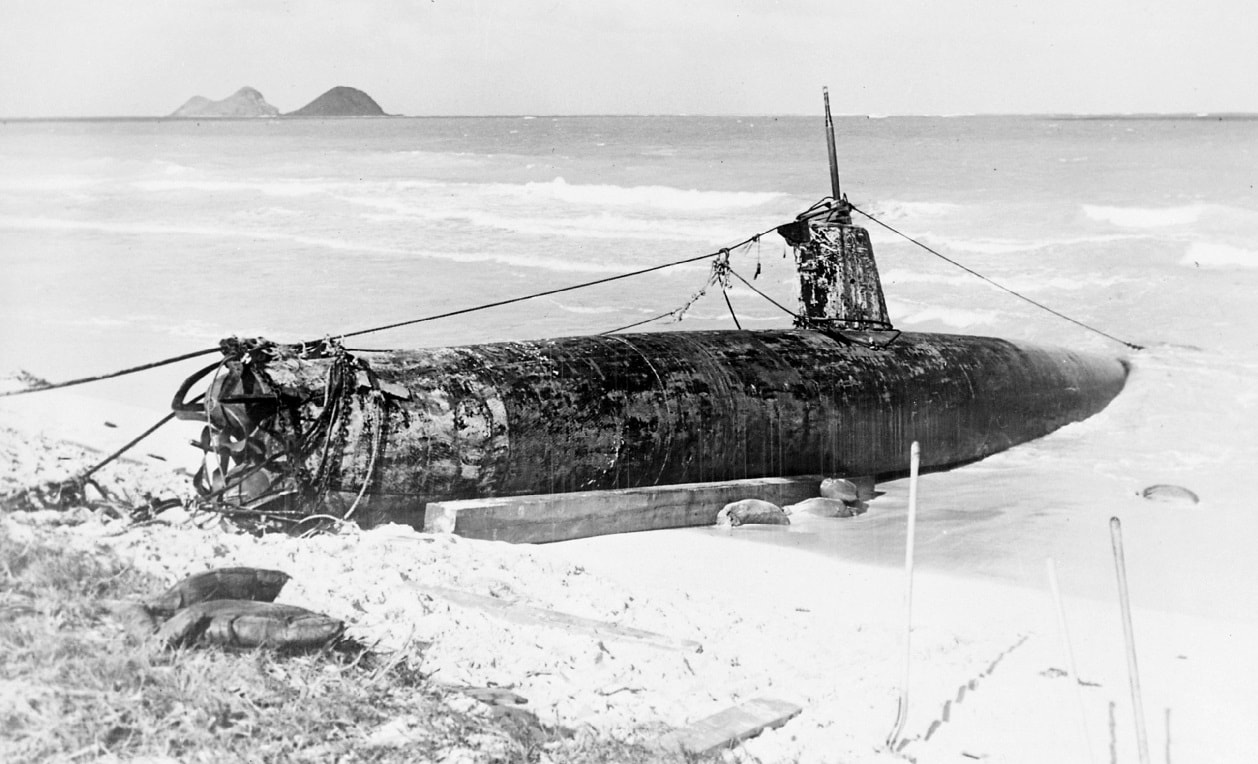 The Japanese "Type A" midget submarine HA-19 partially hauled up on and eastern Oahu beach, during salvage by U.S. forces. It had grounded on 7 December 1941, following attempts to enter Pearl Harbor during the Japanese attack, and was discovered the following day.

5 Japanese Type A Submarines Took Part in the Attack on Pearl Harbor: “Yesterday, December 7, 1941— a date which will live in infamy— the United States of America was suddenly and deliberately attacked by the naval and air forces of the Empire of Japan,” was the historic first sentence of President Franklin Roosevelt’s famous speech to a joint session of Congress on December 8 the day following the Japanese attack on Pearl Harbor.

As noted by FDR, the attack included naval forces as well as aircraft.

Among those were five Type A midget submarines. The Japanese forces had planned to use the subs for a number of different tasks before, during and after the attack. Prior to the arrival of the Japanese aircraft, including bombers and fighters, the submarines were deployed to scout and penetrate the defenses of the harbor. Once the attack from the air began, the submarines were then to release their torpedoes at prime targets and attempt an escape back out of the channel.

Following the air attack, the subs were to station themselves at pre-designated locations to pick up any pilots who couldn’t make it back to their carriers due to fuel or mechanical issues. In one case, a pilot did land on the small Hawaiian island of Niihau, yet the submarine meant to rendezvous had likely been destroyed – and of the five midget underwater boats, none survived the attack.

The Type A Ko-hyoteki midget submarines were transported on board the larger I-16 Type submarines, and then launched near the entrance to Pearl Harbor the night before the attack was to begin. One of those five mini-boats was spotted by the U.S. Navy’s Wickes-class destroyer USS Ward (DD-139), which had been patrolling the entrance to Pearl Harbor when she encountered, attacked, and sank a Japanese midget sub. It was the first combat action of the Pacific War. The submarine reportedly remains where it sank as an element of the Pearl Harbor National Historic Landmark.

At least one of the midget subs was able to enter the harbor, but it was unsuccessful in its mission as it was sunk by the U.S. Navy’s Farragut-class destroyer USS Monaghan (DD-354). Another submarine that attempted to penetrate the harbor entrance drifted around to the east coast of Oahu and was captured the day after the attack. It is one of just four Type A midgets to have survived the war – and it is on display at the National Museum of the Pacific War in Fredericksburg, Texas.

The crew of the submarine included Ensign Kazuo Sakamaki, who became the first Japanese prisoner of World War II captured by U.S. forces. His crewmate CWO Kiroshi Ingaki had drowned shortly after the attack, but Sakamaki was captured. He requested permission to kill himself and that was denied. A pacifist in later life, the former sailor was reunited with his former submarine in 1991.

One other of the five midget submarines deployed on December 7 was found at the harbor entrance in 1960, but the whereabouts of the fifth sub remain a mystery. Some experts believe it may have been off “Battleship Row” as possibly even fire its torpedoes at USS Oklahoma (BB-37) or USS West Virginia (BB-48). It may have been sunk during the attack and could still lie undiscovered inside Pearl Harbor.