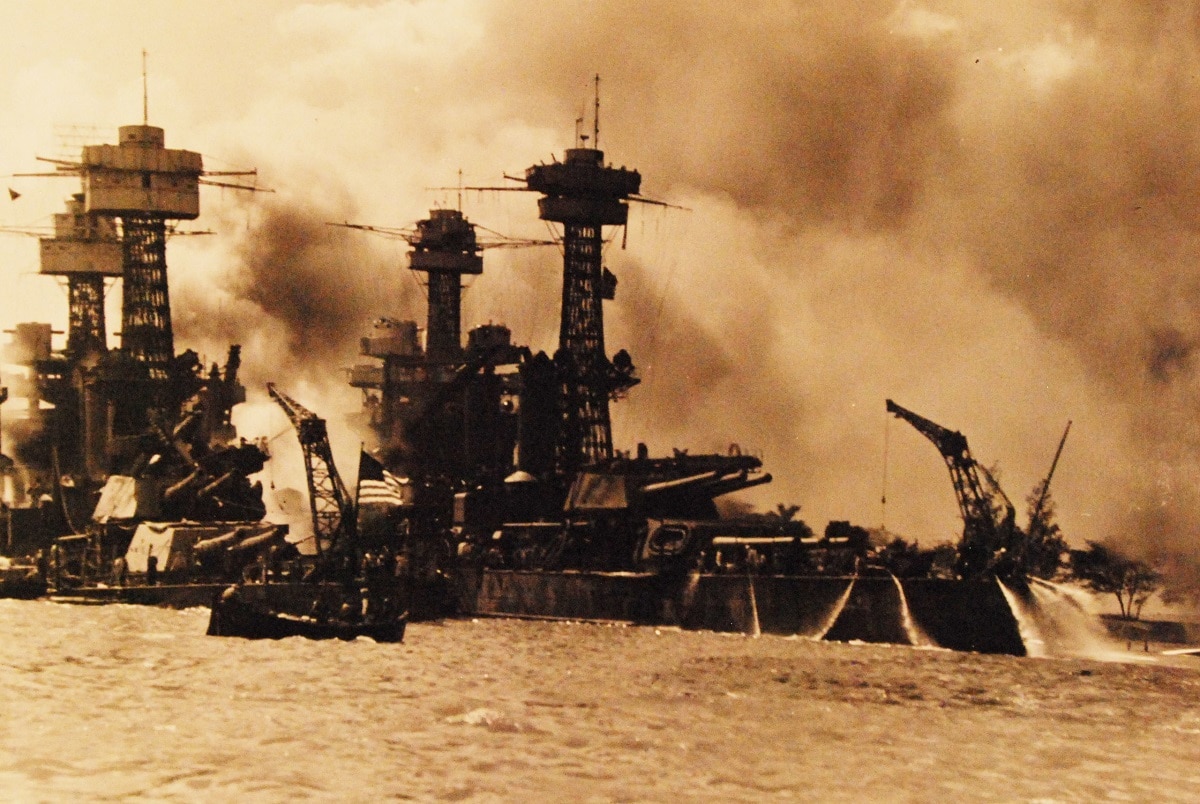 On December 7, 1941 during the Japanese sneak attack on Pearl Harbor, USS West Virginia (BB-48) was among the American warships to be hit and sunk. The Colorado-class dreadnought battleship, which had been commissioned in 1923, was hit by multiple torpedoes fired from a midget submarine and quickly sank in the shallow waters.

West Virginia was engulfed in fuel oil, and while the fires were put out the day after the attack, a total of 106 men were killed in the line of duty. Many were trapped below decks and unable to be rescued. Three had survived for sixteen days until their oxygen and supplies ran out.

Among those killed included the ship’s commanding officer Captain Mervyn S. Bennion, who was mortally wounded by bomb fragments. Bennion remained aboard and assisted in the vessel’s defense until he died. For his efforts, he was posthumously awarded the Medal of Honor.

One of the men who helped carry the dying captain topside was Navy Cook Dorie Miller, who then manned a .50 caliber machine gun and used it to destroy as many as four Japanese planes. He became the first African-American to receive the Navy Cross – while a now-under-construction Gerald R. Ford-class aircraft carrier has been named in his honor.

Returned to the Fight

Struck by seven torpedoes and hit by two bombs, the warship was also extensively damaged from the intense fires, yet she wasn’t out of the fight. The recovery was slow going, with wood and even concrete used to patch up some of the damage while she was refloated on May 17, 1942. Temporary repairs were made at the Pearl Harbor Navy Yard, and in April 1943, West Virginia was sent to the West Coast for final repairs and modernization at the Puget Sound Navy Yard.

When the battleship emerged from the shipyard in July 1944, she was a Phoenix reborn from the ashes, and featured a wider hull and massively improved anti-aircraft battery.

Deployed back to the Pacific, she arrived in time to participate in the pre-invasion bombardment of Leyte in the Philippines. She fired a total of 278 shells from her main battery as well as 1,586 rounds from her secondary guns.

On October 25, 1944, she took part in the Battle of Surigao Strait and was one of the U.S. Navy’s warships that stopped a force of Japanese battleships and smaller vessels that attempted a night attack on the landing area. It was the last time in naval history when battleships engaged battleships with their big guns – and West Virginia has been credited with firing the shots that likely hit the Japanese flagship Yamashiro.

The American battleship then took part in operations to capture Mindoro, Lingayen Gulf, Iwo Jima, and Okinawa, using her sixteen-inch guns to support U.S. ground forces. West Virginia was hit by a Japanese kamikaze plane on April 1, 1945, but remained in action.

She was among the warships present in Tokyo Bay on September 2, 1945, when the Japanese formally surrendered to the Allied forces. West Virginia supported the occupation effort and then participated in Operation Magic Carpet, which helped bring home veterans of the Pacific War. She took part in three trips between Pearl Harbor and the mainland.

The aging battleship was built during World War I and served gallantly during the Second World War, but was formally decommissioned in early January 1947, and assigned to the Pacific Reserve Fleet. She was struck from the Naval Vessel Register in 1959 and sold for scrapping.