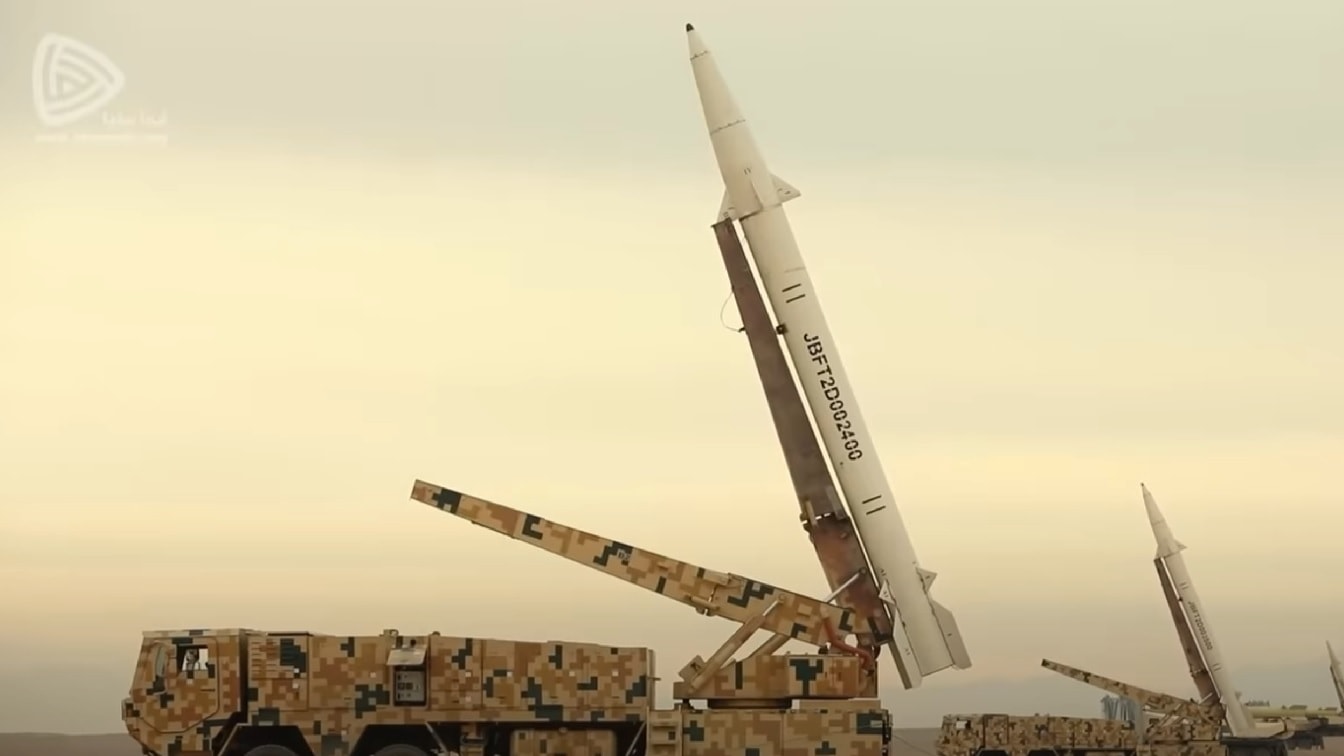 What is Iran thinking? Military exercises offer opportunities to stress test capabilities and improve proficiency—but they also can serve as a form of messaging and performance theater for domestic and international audiences.

Having previously shared a video of motorboats and helicopters attacking a large-scale mockup of a U.S. carrier, Iranian media released yet another bombastic video (see below) on December 27, 2021, depicting missile and drone units of the Iranian Revolutionary Guard Corps’s (IRGC) Great Prophet 17 military exercise undertaken Dec.20-24, 2021 simulating an attack on an Israeli nuclear facility.

To pounding heavy metal music, missile-launching transport-erector-launcher (TEL) and drone carrier trucks assume positions in the desert. The slickly edited propaganda shows the missiles erecting into launch position and boosters igniting, accelerating the missiles to supersonic speed as they rocket out of the atmosphere. At least eight missiles are filmed launching in rapid succession, trailing plumes of vapor like the sinuous heads of a hydra.

Delta-winged Shahed-136 kamikaze drones mounted on angled five-rail racks are launched as well, though the cuts leave unclear the interval between each launch. (You can see the drone-launch rack.)

Then, visible only in the blink of an eye, missiles plummet vertically into the central building and surrounding large facilities, the lead weapon achieving a direct hit. Seven or eight missiles visibly land within the perimeter of the mock facility, the leveling of which has been verified using satellite imagery here.

The video demonstrates that some Iranian ballistic missiles and drones are accurate enough for precision strikes—necessary if Iran’s military seeks to destroy critical facilities and infrastructure, not just terrorize the civilian population by raining random death.

Iranian news agencies claim a total of 16 ballistic missiles and 10 Shahed-136 drones were launched in the exercise from ranges of 220 to 1250 miles, the former including Emad, Ghadr, Sejjil, Zalzal, Dezful, and Zolfaghar missiles.

The propaganda video mostly depicts medium-range ballistic missiles (MRBMs), particularly Dezful missiles on eight-wheel trucks sporting digital camouflage and twin launch rails. There’s also the highly similar tan-painted Zolfaghar short-range missile on a single-rail launcher (0:32). Both types can also be identified by the two arrays of distinctive fins at the base of the booster.

Also depicted are a white Sejjil missile with a distinctive yellow “baby bottle” nose cone (0:31); and an Emad missile (0:37) identifiable by the tiny fins at the base of its reentry vehicle, with its tip painted red.

While Iranian ballistic missile attacks against ISIS in 2017 and October 2018 landed far off target, strikes targeting Kurdish separatists and U.S. bases in Iraq in 2018 and 2020 demonstrated deadly accuracy. But those attacks involved short-range ballistic missiles (SRBMs), while an attack from Iranian soil would require MRBMs to traverse more than 600 miles to reach targets in Israel.

Iran is assessed to have only around 50 MRBMs—and an even smaller subset of those are capable of precision strikes. Iran could (and indeed, has tried to) use Syrian and Iraqi territory to place short-range missiles within range of Israel, but Israeli airstrikes have seemingly destroyed most Iranian attempts to position missiles and artillery thusly.

At least half of the Iranian MRBMs are Scud-derived Shahab-3 missiles which land on average within 1.5 miles (2.5 kilometers) of a designated target—literally missing by well over a mile more than half the time.  Longer-range spinoffs of the Shahab-3 have improved, but not impressive, accuracy; the Ghadr-1 lands on average within 300 meters of a target, and the Emad reentry-vehicle within 300 or 500 meters.

Iran’s Khoramsharr missiles, derived from imported North Korean Hwasong-10 Musudan missiles, maybe intermediate-range capable to strike Western Europe. But they’re thought to be quite inaccurate (landing within 1 mile of the target on average) though Iran may have improved accuracy modestly.

Tehran has also developed a solid-fuel Sejjil series of missiles that can be prepped for launch far more rapidly, and exhibit long range (flying 1,180 miles in a 2009 test), though accuracy is again estimated at just 300 meters.

An April 2021 IISS report on Iranian missiles observes “The principles, techniques and subsystems needed for effective maneuverability during atmospheric re-entry – a necessity for medium-range missiles like the Emad – are very different from those employed on shorter-range missiles…it is unlikely that Iran will be able to deploy an accurate medium-range missile before 2024, though extensive foreign assistance from China or Russia could shorten the timeline by two or three years.”

Nonetheless, Iran’s most accurate MRBMs appear to be spinoffs of its Zolfaghar SRBM: the 620-mile range Dezful announced in 2019, and in 2020 the larger 870-mile range Qasem Soleimani, named after the Iranian general assassinated by the U.S. earlier that year. The Dezful appears identical to the Zolfaghar, while the Qasem is larger and lacks the additional triangular fins at the booster’s base.

The accuracy of these weapons is unclear, but the original short-range Zolfaghar is thought to use commercial satellite navigation for guidance to achieve a high degree of precision, despite poor performance in strikes in 2017 and 2018.

Dezful and Qasem missiles would have just enough range to reach major targets in Israel and thus may represent Iran’s most credible long-distance precision-strike threat. However, these missiles conceivably may be rendered inaccurate by denying access to commercial satellite navigation systems.

Which weapons were used in the video?

Analysts generally believe the missiles plunging into the mockup reactor are Dezful MRBMs. Though the booster section with its distinctive tail fins has been ditched, the triangular maneuvering fins visible on the truncated missile’s base are not seen on other Iranian MRBMs.

Meanwhile, the Shahed-136 kamikaze drones depicted in the videos are the same type identified by U.S. and British intelligence as being used in the deadly attack on the oil tanker Mercer Street in July 2021, killing its captain and his bodyguard.

A report in Newsweek claims the Shahed-136 is estimated to have a range of 1,242 miles—a surprisingly high number, but even half that distance would suffice for strikes on Israel.

However, this raises the question of the Shahed-136’s command link and guidance. Lacking satellite communications links, Iranian drones are restricted to radio command links reaching out 120-200 miles—well short of Israel. Perhaps, the Shahed has sufficiently accurate inertial or satellite navigation capabilities to work like a very slow cruise missile once beyond operator control. Alternately, drone control might be ‘handed off’ to controllers closer to the target (say in Syria or the Gaza Strip), though reliance on remote control for accuracy would make Shahed-136s susceptible to jamming.

The Shahed-136 is sometimes described as a ‘swarming’ drone, but this appears to refer only to the idea that many can be rapidly launched from one truck, not any evidence they coordinate via sophisticated networked AI.

Even with perfected accuracy at long-distance, Iranian missiles and drones would face one more big hurdle attacking Israel: its multi-layered missile defense systems. These famously includes the Iron Dome system protecting against crude rocket and mortar attacks (though it also has some anti-drone and cruise missile capability). But layered atop it are medium-range Patriot and David’s Sling surface-to-air missiles, then Arrow II short-range ballistic missile interceptors, and finally higher-altitude Arrow III interceptors to smack down medium- and intermediate-range ballistic missiles. A more sophisticated Arrow IV interceptor to replace the Arrow II is in development by Israeli Aerospace Industries and Lockheed.

While missile and air defenses are never impregnable, Israel’s have so far demonstrated a high success rate. At a minimum, they would inflict heavy attrition against an Iranian missile or drone strike, particularly as Iran’s MRBM inventory isn’t assured to exceed Israel’s anti-ballistic missile capacity.