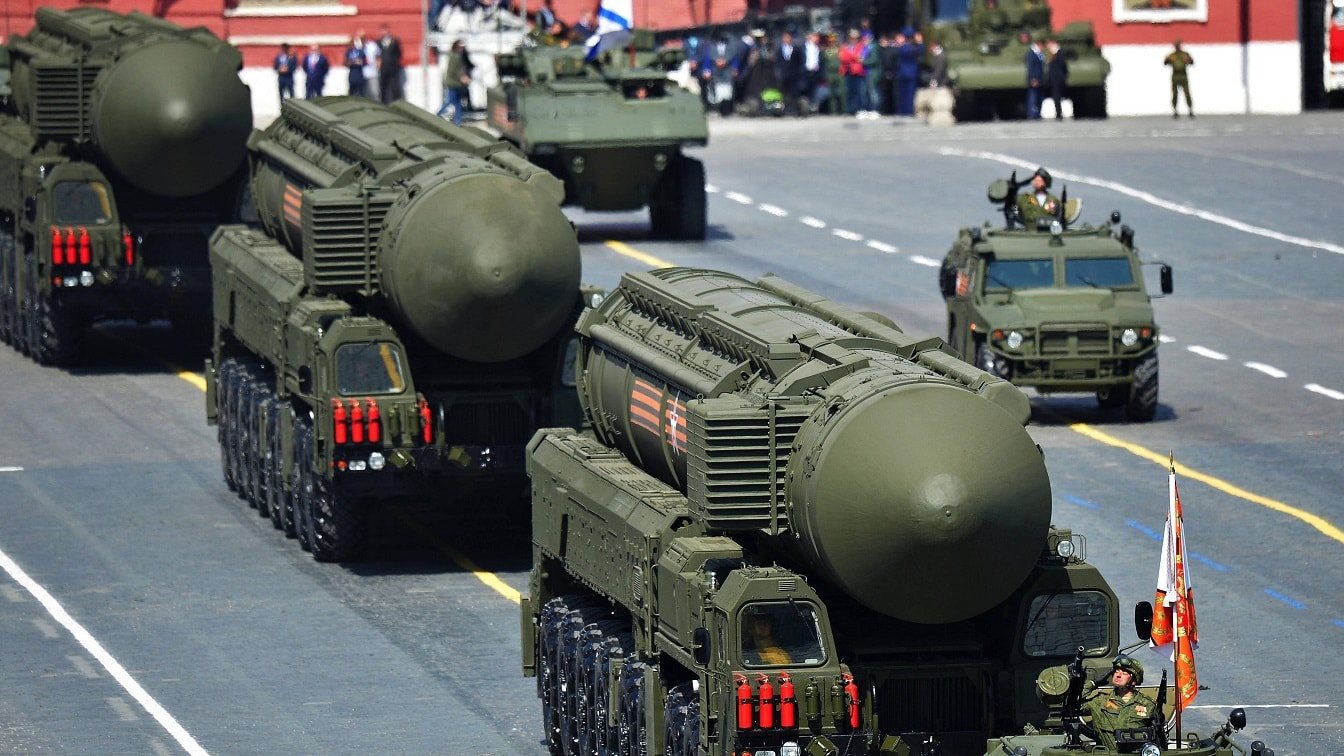 Russia believes it can introduce nuclear weapons into a conventional war without taking nuclear fire in return and that such action will result in a Russian military victory. This strategy is what the Russians call “de-escalation” of a war although a more accurate description would be “escalate to win.”

In 2012, the Russian Ministry of Defense (MoD) reiterated the “de-escalation” concept involving “a limited use of weapons, including precision weapons, in order to deescalate sources of tension and resolve the conflict situation on conditions favorable to Russia.” In 2017, then-DIA Director Lieutenant General Vincent Stewart stated, Russia is “the only country that I know of that has this concept of escalate to terminate or escalate to deescalate, but they do have that built into their operational concept, we’ve seen them exercise that idea and it’s really kind of a dangerous idea…” He also said that he had seen no evidence that this policy was changing.

All Russian nuclear exercises have several functions: training the troops, exercising command and control, and making implicit nuclear threats or “nuclear saber-rattling [which] is unjustified, destabilizing and dangerous,” as NATO Secretary General Jens Stoltenberg put it. The threats are part of Russian information warfare, which can turn on a dime. For example, the profile given to the December 2020 large strategic nuclear exercise was limited since no high-level official was involved in briefing the press. However, the information released by the Russian MoD if compared to previous MoD large nuclear exercise announcements, involved a record number of live launches of strategic ballistic missiles (ICBMs and SLBMs). The SLBMs included an unprecedented large strategic exercise salvo launch of four missiles. Significantly, all of the missiles launched were “modern” ICBMs and SLBMs (i.e., post-Cold War developments).

In contrast, the October 2019 large strategic nuclear exercise involved the release of an unprecedented amount of information on the Russian forces involved. About half of Russia’s strategic nuclear forces participated in the exercise and, according to noted Russian journalist Pavel Felgenhauer, at the end of the exercise, there was a simulated launch of most of the forces involved. The May 2014 large strategic nuclear exercise, in addition to the strategic missiles launched, also featured the involvement of non-strategic missiles and artillery. This was apparently motivated by the desire to threaten NATO in the midst of the Russian invasion of Eastern Ukraine. The information released in Russian exercises is clearly linked to their information warfare goals.

The March 2021 Russian naval exercise (Umka-21), the first major Russian nuclear exercise during the Biden administration, involved both President Putin and the Commander of the Russian Navy Admiral Nikolai Semenov, who told Putin that in the Umka-21 naval exercise:

The following tasks have been fulfilled for the first time in the history of the Navy: three atomic missile carriers arrived on schedule within a region with a radius of 300 meters after breaking through 1.5 meter thick ice under an integrated plan; …

President Putin added that this had never happened in Soviet times. Noteworthy, the nuclear phase of the Umka-21 came soon after the December 2020 Russian large strategic nuclear exercise, which, as noted above, had a record number of announced live launches of strategic ballistic missiles and ended with a live salvo launch of four of the new Bulava-30 SLBMs.

However, while this was a nuclear naval exercise, it was not a large strategic nuclear exercise that employs the full Russian Triad and sometimes non-strategic nuclear weapons. While nuclear escalation is a feature of almost all Russian large theater exercises, such blatant strategic nuclear escalation signaling is unusual in a theater exercise. The ground forces involved in the Umka-21 naval exercise were only a brigade. Even recognizing that Russia plans first use of nuclear weapons in any major war, this type of nuclear escalation appears completely inappropriate for the war game as it was described to President Putin. The nuclear phase that Putin was briefed on was part of an Arctic exercise called Umka-21, which is described by the Barents Observer as “…Russia’s most complex military drill in the high Arctic, involving fighter jets, torpedo shootings and Arctic brigade soldiers training warfare on Franz Josef Land.” The Russian MoD indicated that the exercise “…involved more than 600 military and civilian personnel and about 200 pieces of weapons, military and special equipment.” This does not exactly suggest a conflict that any rational leader would escalate to a general nuclear war.

Concurrent with the exercise, the Russian MoD reported an Arctic flight by two Tu-160 heavy bombers over the Barents Sea and the Norwegian Sea. These flights are intended to be provocations. Two days later, the Russian MoD reported the involvement of an unspecified number of Su-34 fighter bombers in attacks on Naval ships in the Arctic. The next day it announced an Arctic air defense exercise involving a Russian frigate. Two Russian Tu-142 ASW bombers entered the Alaska air-defense identification zone. These actions were not identified as part of the Umka-21 exercise, but they could have been. On March 30, NATO said, “NATO fighter jets scrambled 10 times on Monday, March 29, 2021, to shadow Russian bombers and fighters during an unusual peak of flights over the North Atlantic, North Sea, Black Sea, and Baltic Sea. In all, NATO aircraft intercepted six different groups of Russian military aircraft near Alliance airspace in less than six hours.”

On March 31, Air Force General Glen VanHerck, the Commander of U.S. Northern Command, said, “Within the last week or so, there’s been significant activity in the Arctic.” He went on, “These Russian military operations include multiple flights of heavy bombers, anti-submarine aircraft, and intelligence collection platforms near Alaska. These efforts show both Russia’s military reach and how they rehearse potential strikes on our homeland. Last summer, the Russian Navy focused its annual OCEAN SHIELD exercise on the defense of Russia’s maritime approaches in the Arctic and Pacific.” Even so, this does not suggest a battle that should have any rational leader escalating to general nuclear war.

One is reminded of a statement made by noted Russian journalist Pavel Felgenhauer over a decade ago: “…our superiors are potentially ready to burn all of us in nuclear fire because of disputes over ice, rocks or South Ossetia [a province of Georgia occupied by Russia.]” However, there is probably more to Putin’s madness. Dr. Maxim Starchak, in an excellent Atlantic Council report, documented Russian development of the submarine tactics used in the exercise in 2019 and noted that “This [the 2019 events] is especially important as exercises with weapons from under the ice have not been held for a long time.” Umka-21 used all these tactics and procedures in a simulated multi-submarine “integrated” strategic nuclear strike.

While Putin and his generals have made numerous nuclear threats, this is something new. Just when you think that Putin’s nuclear policy can’t get any worse, it does. It may be that the whole purpose of the nuclear signaling in the Umka-21 exercise was not related to a real naval war scenario but rather to threaten the Biden administration with general nuclear war. Putin and his generals believe that nuclear threats enhance Russian power and leverage.

Putin began using Russian heavy bombers for nuclear signaling in 2007 when he announced that, “Combat alert has begun today. Twenty strategic missile carriers are taking part in it. The planes that have scrambled will be in the air for 20 hours with refueling and in interaction with the Navy.” Russian bomber patrols dramatically increased in 2019 and 2020. According to state-run Sputnik News, the intent of the bomber flights is to “…survey the skies around Russian borders reminding everyone that Russia is a power to be reckoned with.”

The nuclear ballistic missile submarine phase of Umka-21 may be nuclear signaling relating to renewed Russian aggression against Ukraine. In late March, CBS News reported a buildup of Russian forces along the Ukraine border. On March 31, there were reports that “Trains loaded with large amounts of Russian military hardware, including tanks and other heavy armored vehicles, as well as heavy artillery, appear to be streaming toward the country’s borders with Ukraine.” Serious Russian-supported fighting resumed in Eastern Ukraine. The New York Times reports, “The [four Ukrainian soldiers] deaths, along with a buildup of Russian forces on the border, has seized the attention of senior American officials in Europe and Washington.” U.S. troops in Europe and Ukrainian troops were put on the highest alert. On March 11, Pavel Felgenhauer predicted that “Maybe six to eight weeks remain before belligerent rhetoric and sporadic bombardments in Donbas might truly transform into something much more ominous.” Umka-21 may be related to this. This would not be the first time nuclear threat posturing has been used by Russia to deter NATO support for Ukraine, but this is perhaps the most dangerous nuclear threat posturing yet. The threat of general nuclear war, a throw-back to Soviet days, could be related to the deterrence of a NATO response to a serious Russian incursion into Ukraine.