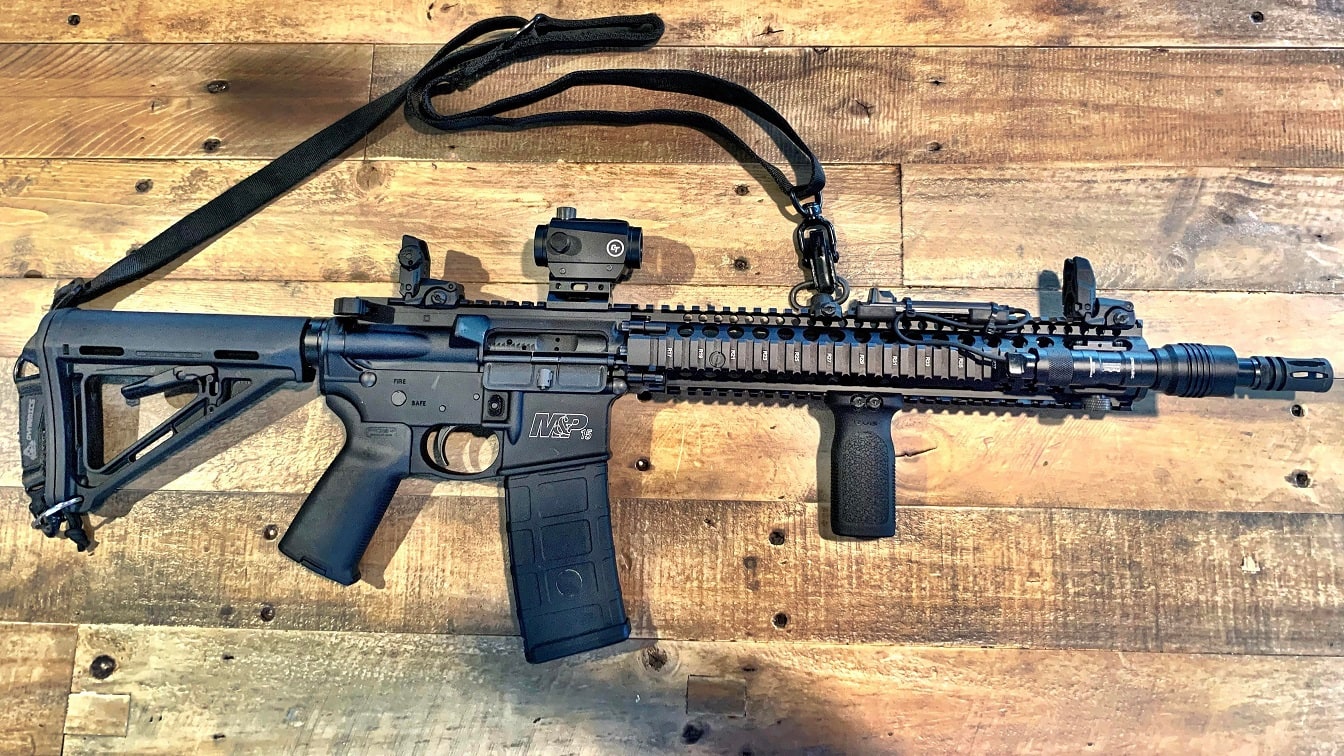 The Smith & Wesson M&P Sport II is A Reliable AR-15 Rifle for Under $800: I won’t lie to you, I’m a little bit of a snob when it comes to AR-15’s, but I’m still tentatively recommending the Smith & Wesson M&P Sport II. I like fancy ARs and place a whole lot of value on them almost entirely because of what they stand for. They represent freedom, security, and will be the tool that keeps a tyrannical government in check. I want my rifle to be the best it can be.

In reality, not everyone can afford something like that but everyone should be able to own an AR-15 without going broke. That’s why I’m recommending it if you’re on a budget. Keep reading to find out everything the Smith & Wesson M&P Sport II has to offer.

The Sport II is as basic as it gets. You have all your standard parts like a mil-spec fire selector, trigger, pistol grip, sights, charging hand. You get the picture. Think of an AR-15 and you’ve got a solid idea of what this is. You, unfortunately, won’t be getting a quad-rail, MLOK, or KeyMod handrail, but that can be easily swapped out. It’s not an issue at this price point. It operates like any other AR-15. It’s not smooth or high-quality, but it works. That’s what matters.

My main focus when trying to get the best bang for my buck (with a rifle) is reliability. Whether you’re looking for a self-defense rifle or just something to shoot at the range, reliability is key. Jams are never any fun. I’m happy to report that the Sport II works like a charm. It chugged through several different types of ammunition without issue, except for a failure to extract. I’m gonna chalk that one up to the break-in period. Now, I can say that this gun runs fine in optimal conditions. Would I trust it when I’m crawling through dirt? Maybe not so much.

With a proper optic on this rifle, accuracy was average. It’s not a laser, but most guns never are. It still has the potential to be a really solid shot out past 100 yards though. I was hearing the lovely ping of steel every time I pulled the trigger. For this test, I slapped on an appropriately budget optic, the Vortex Strike Eagle 1-8 LPVO, which performed fantastically.

I do have some recommended additions if you want to turn this thing into a “duty” rifle though. If you swap out the handrail, you’ll need a flashlight. This way you can always ID targets or even blind them. A decent optic is non-negotiable. Don’t go cheap on this. Spend at least $300 if you can swing it. And of course you need something to hold it, so pick up a sling. Slap these items on your M&P Sport II and you have a half decent battle rifle.

You might be asking yourself “why is he only tentatively recommending this?” There are absolutely better rifles for the money out there, but you can’t really beat a price tag of under $800 MSRP for an AR-15. If you have the cash, spend it on something that’ll last forever and perform smoothly. The Sport II isn’t that but it’s the door into the pinnacle of self-defense and that trumps not having anything.