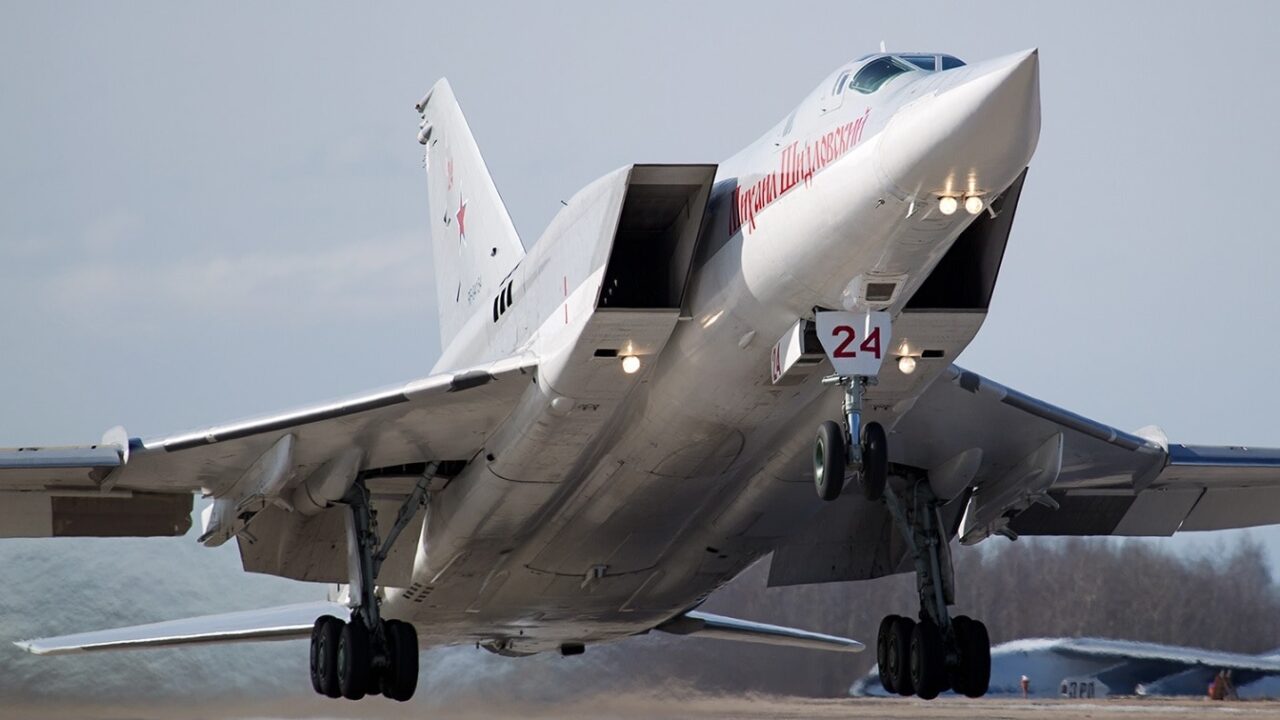 Known by its NATO moniker Backfire-C, the Tu-22M3 is flying out of Syria and patrolling the Mediterranean Sea in a manner that hearkens back to the Cold War.

If you read Tom Clancy novels during the Soviet era, you may recognize the provocative exploits of the Backfire. Below I present a rundown of its recent deployments and capabilities.

Three Tupolev Tu-22M3 Backfire missile carrier bombers were deployed to Khmeimim airbase south of Latakia in Syria earlier in 2021. This is a modern tactical and strategic development. Tactically because the bombers can keep an eye on the U.S. Navy, contest the skies over the Mediterranean, and threaten NATO shipping. This is a strategic move because it allows the Russians to have more power and influence in the Middle East. The Backfires could reach the American base at Camp Lemonnier, Djibouti which has 4,000 personnel including special operations forces, drone operators, and intelligence analysts.

The Tu-22M3 can also fly near Libya where Russia is trying to play a role in ending a civil war. The Russians reportedly have private military contractors from Wagner working in Libya, so this is an additional way that Moscow is projecting power and protecting assets in the Middle East.

The Russians like to claim that airplanes deployed at Khmeimim, which the Russians have enlarged over the last year, are there only on short rotations. To be sure, the Backfire has dropped bombs on Syria before to target rebels, but those were missions that originated from Russia.

The Backfire is not the only bomber in Syria. Other Russian heavy bombers fly out of Khmeimim such as the Tu-95MS and the Tu-160. This shows how serious the Kremlin is about the Middle East and its willingness to use the military to shape the battlespace.

Russia Institutes a Series of Upgrades o the Tu-22M

There are at least 60 Tu-22M and M3 bombers in the Russian arsenal. The supersonic Tu-22M3 received an upgrade in the 1980s with new NK-25 engines that provided a better top speed of 1,429 miles per hour, a range of 4,350 miles, and an improved payload. Aerodynamics were enhanced with some design changes to its nose and wings. An enhanced radar was also installed.

Watch Out for the Missiles It Carries

The Tu-22M3 Backfire-C can launch an assortment of missiles: from the Kh-22 and Kh-23 anti-ship munitions to the Raduga Kh-15 missiles to the newer Kh-47M2 Kinzhal nuclear-capable ballistic missiles. Plus, with a 10-ton payload, it can drop a variety of unguided bombs.

The Backfire went through another upgrade that was finished in 2017 that created the Tu-22M3M variant. The first flight of the updated model flew in 2018. 30 bombers got the upgrade. This has better avionics and more precise bombing along with the long-range, nuclear-capable “carrier killer” Kh-32 cruise missile. The Russians claim that someday these airplanes could carry hypersonic weapons. The Russians believe the Tu-22M3M can also be improved with new electronic warfare capabilities.

What Will the U.S. Navy Do?

The U.S. Navy won’t be overwhelmed by the modern Tu-22M3M Backfire, but it will have to account for the bomber’s stand-off over-the-horizon capabilities. The ranges of the Russian missiles are noteworthy. A hypersonic weapon capability could endanger U.S. and NATO shipping in the Mediterranean.

The Americans Have a Vote in a Potential Fight

Is the deployment of Russian modern missile-carrying bombers a dangerous game-changer in the Middle East? Not completely.

American naval planners are used to dealing with China in East Asia and the Chinese have numerous stand-off anti-ship missiles too. The U.S. Navy’s Aegis Combat System is highly-advanced and ready to defend against numerous types of air-to-surface missiles. Carrier-based F-35s can eliminate Russian bombers. So, even though the Russians have made a significant move to the Middle East, the Americans can defend and strike back with great success if necessary.