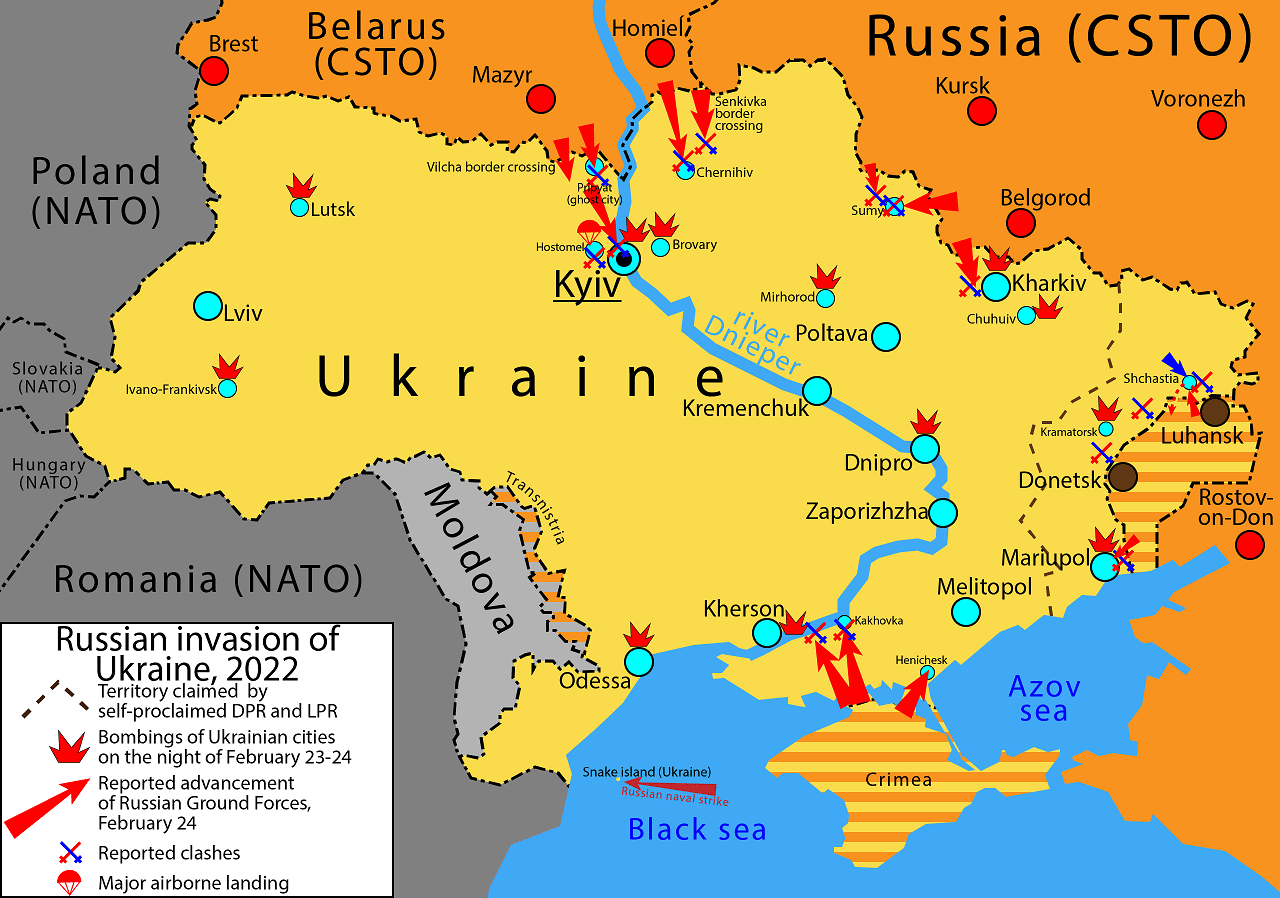 On the second day of the Russian invasion of Ukraine, Russian troops are encountering significant resistance across Ukraine and have failed to achieve their major objectives. However, Russian forces continue to advance in the south from Crimea, the east toward Kharkiv, and north toward Kyiv.

According to the Russian Ministry of Defense, the Antonov airport, which is located 10 miles west of the Ukrainian capital, was captured on Friday. The airport was one of the first targets for the invading Russian forces on the first day of the operation. A Russian air assault took the airport by surprise, but a Ukrainian counterattack with tanks and special operations forces retook it on Thursday night.

Russian troops coming from Belarus seem to have linked with the airborne troops in the airport, thus blocking Kyiv from the West. The mayor of Kyiv has declared an emergency, and Ukrainian forces are handing out weapons to Ukrainian civilians to fight off the invading Russian troops.

The Ukrainian Ministry of Defense claimed that since the first day of the Russian invasion, the Ukrainian military had destroyed 80 tanks, ten aircraft, seven helicopters, and 516 armored personnel carriers and vehicles. If accurate, the destruction of so many tanks and armored vehicles means that the U.S.-made FGM-148 Javelin anti-tank missile and the Next Generation Light Anti-Tank Weapon (NLAW), which the U.K. provided to the Ukrainian military, are put to good use.

In addition, the British Ministry of Defense estimates that the invading Russian forces suffered 450 killed in action on the first day of the operation.

“Our assessment, as of this morning, is that Russia has not taken any of its major objectives,” the defence secretary said. In fact it’s behind its hoped-for timetable. They’ve lost over 450 personnel. One of the significant airports they were trying to capture with their elite spetsnaz has failed to be taken and, in fact, the Ukrainians have taken it back. So I think, contrary to great Russian claims and indeed President Putin’s vision that somehow the Ukrainians would be liberated and would be flocking to his cause, he’s got that completely wrong. And the Russian army has failed to deliver on day one its main objective,” British Minister of Defence Ben Wallace said.

It is worth noting that the airport near Kyiv that the Ukrainian forces recaptured after the bold Russian air assault on day one of the invasion seems to have been retaken by a large Russian airborne force.

In a televised statement, Russian President Vladimir Putin called the Ukrainian troops to lay down their weapons and surrender and described the Ukrainian government as a “band of drug addicts and neo-Nazis.”

On Thursday night, Ukrainian President Volodymyr Zelensky had said that he was Russia’s “target number 1.”