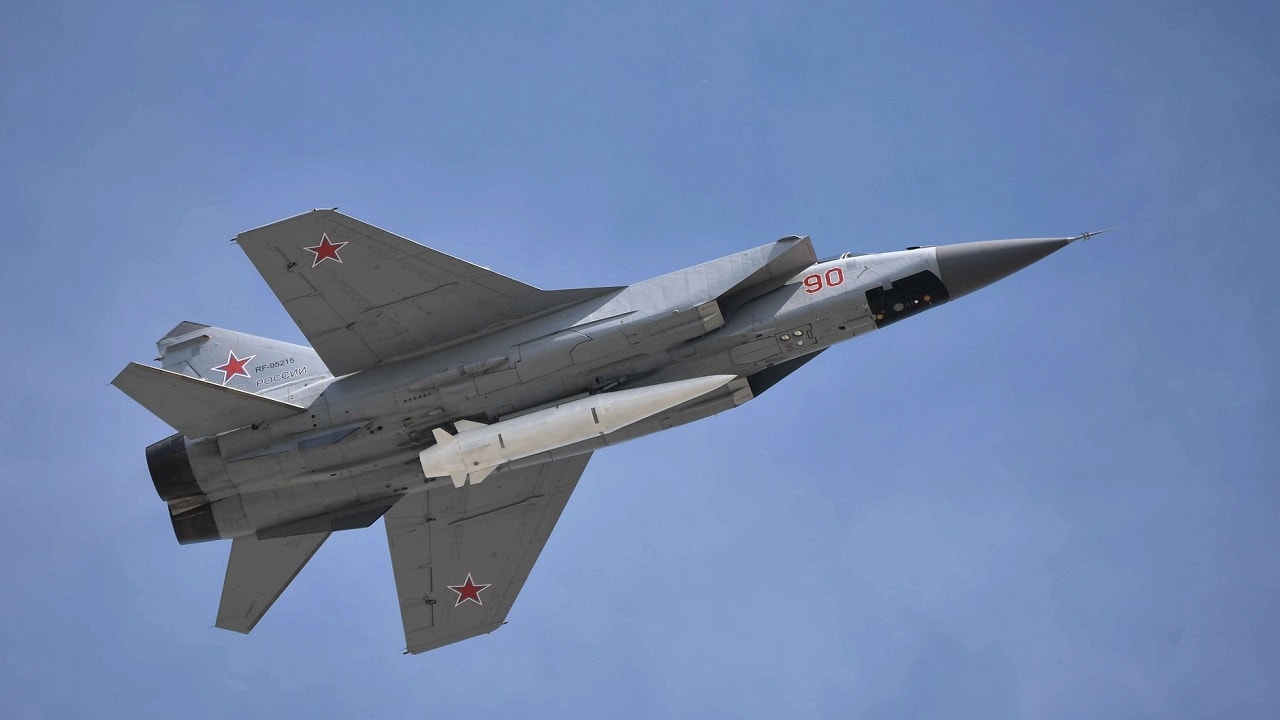 On Saturday, Russia’s Ministry of Defence announced the first operational use of the nation’s new Kh-47M2 Kinzhal hypersonic missile in a strike against a weapons depot in Ukraine’s western Ivano-Frankivsk region. While this is the first operational use of this new Russian weapon, it’s not exactly the historic occasion it may seem. Russia’s Kinzhal may be hypersonic, but it’s certainly nothing new.

Hypersonic is a term used to describe platforms that can travel at speeds in excess of Mach 5, or about 3,836 miles per hour, but the term has been adopted for advanced new weapons systems being developed all around the world. The Kinzhal does travel at hypersonic speeds, but it is not one of these advanced new weapons.

The truth is, the Kh-47M2 Kinzhal hypersonic missile is actually little more than a conventional air-launched ballistic missile with a design that dates back to the 1980s. It has benefited a great deal from both intentional and less-than-intentional misconceptions about this new class of weapons, often cited as a reason the United States is lagging behind Russia in a hypersonic arms race (that, as we’ve discussed before, isn’t quite what it seems either).

Hypersonic speed isn’t actually all that special, but there are new weapons that leverage hypersonic speeds to achieve objectives in new or different ways. The Kinzhal, however, just isn’t one of them.

The word hypersonic has a cutting edge connotation to it and recent media coverage of these technologies has treated the realm of hypersonic flight like it’s right out of a science fiction movie. But hypersonic platforms have actually already been around for decades, and you’re almost certainly already familiar with a number of them.

At hypersonic speeds, air itself becomes the enemy as it impacts the vehicle, creating enough friction and pressure to damage or even incinerate most common aircraft and missile materials. The space shuttle, however, regularly exceeded Mach 25, or more than 17,500 miles per hour, during reentry. The Air Force’s current (and secretive) X-37B can also reach these blistering speeds. In fact, practically every ballistic missile and spacecraft mankind has ever launched had been and still is hypersonic in nature.

That means all of the ICBMs in America’s nuclear stockpile, all of Russia’s Kinzhal missiles, and even Elon Musk’s Falcon 9 reusable rockets all share the distinction of being hypersonic… and in fact, Russia’s Kinzhal missile has more in common with those applications than it does with the new slew of “hypersonic weapons” nations like Russia, China, and the United States are competing to field.

The Kh-47M2 Kinzhal (Russian for Dagger) entered operational service in 2017, according to Russian statements made in 2018. It is not a new weapon, so much as a modified version of the ground-launched 9K720 Iskander—a short-range ballistic missile—with a new guidance system designed specifically for air-to-ground operations.

The 9K720 Iskander’s development began in 1988, but prolonged delays, brought about initially by the fall of the Soviet Union, prevented the first full flight test until 1998. A total of 13 test launches of the missile were conducted at Russia’s Kasputin Yar test range between 1998 and 2005, with the weapon finally entering operational service the following year, in 2006.

Like the Kinzhal, the Iskander missile achieves hypersonic velocities through a quasi-ballistic flight path that never departs the atmosphere, and it can maneuver throughout its trajectory to avoid being intercepted. The 9K720 Iskander ballistic missile and Kh-47M2 Kinzhal are indeed capable ballistic weapons, but they’re a far cry from the cutting-edge technology usually referenced in conversations about hypersonic missiles. The premise behind the Kinzhal missile is a pretty dated one—so much so that it shares a great deal in common with a 2006 NASA effort to leverage the Navy’s stockpile of retired AIM-54 Pheonix missiles for hypersonic flight testing.

The AIM-54 Pheonix missile was a smaller weapon than the Kinzhal, with a smaller single-stage solid-propellent rocket motor and less fuel on board, resulting in a top speed of Mach 4.3 when working as an air-to-air weapon. But by adjusting its flight trajectory into a dramatic ballistic flight path and launching it at high speed, NASA believed they could reliable achieve hypersonic velocities greater than Mach 5 with the Phoenix missile.

Today, when people talk about new hypersonic weapons, they’re usually referring to one of two kinds that are currently in development or in service with China, Russia, and the United States: hypersonic glide vehicles and hypersonic cruise missiles.

Hypersonic Glide Vehicles (HGVs) aren’t all that different than the warheads on traditional long-range ballistic missiles, at least in the early stages of their flight path. They are carried into the atmosphere via high-velocity rocket boosters just like traditional ICBMs, though often not quite as high. The missile then deploys one or more glide vehicles that rely on momentum and their control surfaces to manage their high-speed descent as they close with their targets.

Russia does have a hypersonic boost glide-vehicle reportedly in service in their Avangard weapon system slated to be carried aboard their forthcoming nuclear ICBM, the RS-28 Sarmat. China’s DF-ZF anti-ship weapon also falls within this category, as do America’s Conventional Prompt Strike weapon and AGM-183 Air-Launched Rapid Response Weapon (ARRW), both in development.

Hypersonic cruise missiles, on the other hand, rely on an advanced propulsion system called a scramjet. A scramjet, or supersonic combusting ramjet, is a variation on longstanding ramjet technology, but allows combustion to take place while air flows through the engine at supersonic speeds. Because scramjets are really only efficient at these high speeds, these missiles are often deployed from fast-moving aircraft or rely on a different form of propulsion in the first part of their flight path (like a rocket).

From there, hypersonic cruise missiles operate much like traditional cruise missiles–at least in theory. They follow a much more horizontal flight path than boost-glide vehicles or ballistic missiles and maneuver using control surfaces just like an aircraft would circumvent or defeat defenses. In practice, these platforms are far more difficult and expensive to build than traditional cruise missiles, however—and to date, no nation has successfully fielded a scramjet-powered weapon.

Russia bills the Kinzhal as “hypersonic” to help sell weapons

Russia’s defense budget tends to hover at around $60 billion per year, which places them on fairly equal footing with nations like the UK, despite maintaining a significantly larger force than that of its spending peers. As a result, Russia has been forced to make hard decisions regarding the allocation of its meager budget.

As we’ve covered in the past at Sandboxx News, Russia has chosen to devote a lot of resources to converting its defense apparatus into a marketing machine for foreign weapons and equipment sales. The nation’s stagnating economy, already struggling under international sanctions, has severely limited Russia’s ability to modernize its military force. But Russia has continued to fund the development of new weapons and systems aimed at garnering a great deal of attention, rather than focusing on maintaining or improving its existing equipment fleets.

Russia just can’t afford to mass-produce advanced aircraft like the Su-57 stealth fighter or tanks like the T-14 Armata without foreign interests footing the bill. And in order to attract those foreign buyers, Russia must present the image of a nation capable of developing weapons that are on par or even superior to that of powerful nations like the United States and China.

So by taking advantage of the general public’s misconceptions when it comes to things like the term “hypersonic,” Russia is able to convey an image of a 21st-century military power for a real bargain. In other words, Russia hopes to secure the funding it needs to actually develop and field advanced, cutting-edge tech by presenting the Kinzhal and other dated or poorly-functioning weapons as advanced cutting-edge tech.

In this article:Hypersonic Missile, Kinzhal, Russia, Ukraine, War in Ukraine