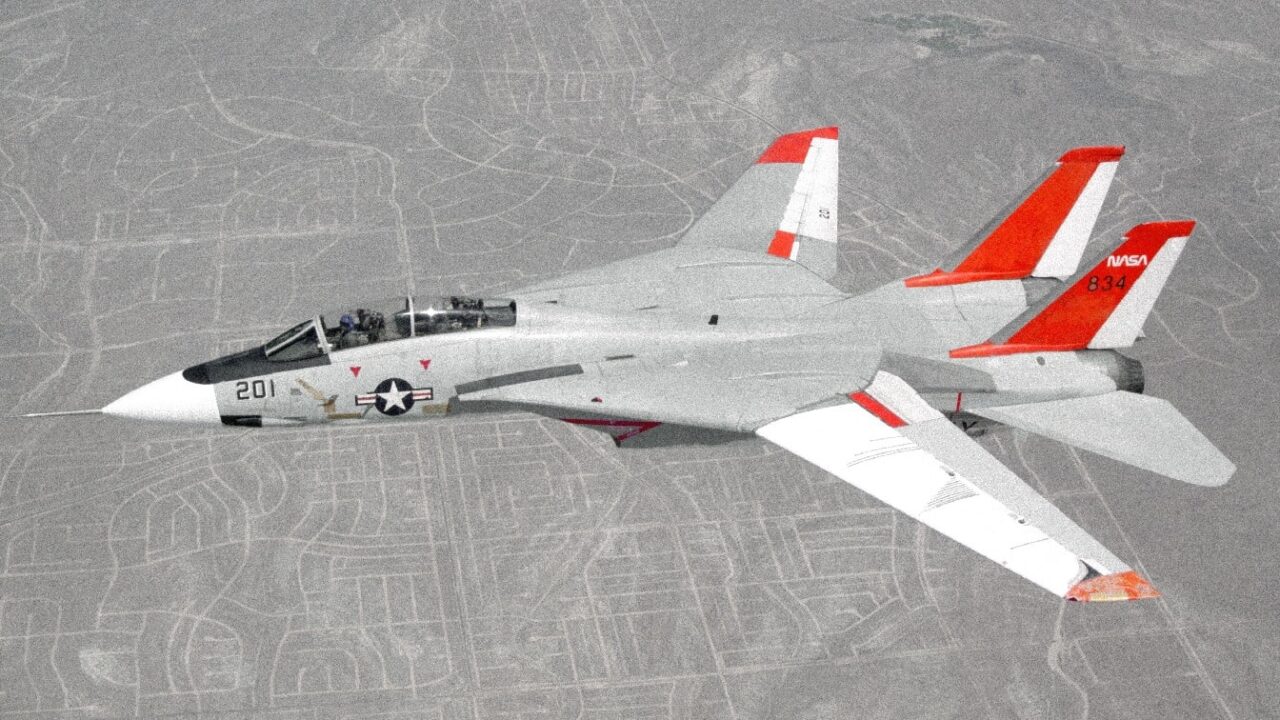 An F-14 Navy Tomcat, seen here in flight, was used at Dryden in 1986 and 1987 in a program known as the Variable-Sweep Transition Flight Experiment (VSTFE). This program explored laminar flow on variable sweep aircraft at high subsonic speeds.

During its more than thirty years in operation, it more than lived up to the role of air superiority and fleet defense interceptor.

Military aviation maker Grumman had a long history with feline names, especially for its Navy fighters beginning with the F4F Wildcat, which saw service in the early stages of the Second World War. Grumman, which was awarded the Navy contract in January 1969, chose a special name for the F-14. In addition to keeping with the theme, the aircraft also honored U.S. Navy Admiral Thomas “Tomcat” Connelly who had called upon Congress in the 1960s for the Navy to develop a carrier-based fighter.

The F-14 Tomcat had its first flight on December 21, 1970, and despite being designed as an “all-weather” combat aircraft, the flight was cut short due to extreme weather.

A second flight, nine days later, didn’t go any better. In fact, the aircraft crashed just minutes after takeoff due to sudden hydraulic failure – and while the test crew survived that crash, tragically the pilot was killed in a subsequent test flight of the Tomcat.

With its variable-sweep wing, the F-14 could match the speeds of other aircraft as needed – and for takeoff and low-speed flight, the wings would shift to the front, while for supersonic speeds the wings could tuck backward. The concept of variable-swept wings had first been tested with the German’s Messerschmitt P.1101 during the Second World War, and was later used with the American Bell X-5.

The Tomcat’s engines with afterburners were able to produce approximately 55,000 pounds of thrust and could reach speeds in excess of 1,500 mph (Mach 2.34) at altitude.

Though the F-14 had been developed as a lightweight aircraft, at nearly 44,000 pounds (empty) the F-14 was actually the largest and heaviest U.S. fighter to fly from an aircraft carrier. One of the reasons the plane was so large and heavy was to fit its huge radar system.

The F-14 was designed to engage enemy aircraft in all weather conditions as well as at night and could track up to 24 targets simultaneously. The plane featured an advanced weapons system that includes a powerful Hughes AWG-9 radar, which used in conjunction with the Phoenix AIM-54A missiles, can pick out and destroy a chosen target from a formation at a distance of over 100 miles. Additional armaments include a variety of other intercept missiles, rockets, bombs, and an internal M61A1 Vulcan 20mm Gatling-style rotary cannon.

It could also strike targets up to 115 miles away, and in one test, a pilot fired all six of the aircraft’s missiles within a span of 38 seconds. Four of them scored a perfect bullseye.

The Tomcat drew its first blood in August 1981 during the “Gulf of Sidra incident,” in which two F-14s were attacked by a pair of Libyan Su-22 Fitters. Both Fitters were shot down, but the events would be replayed nearly eight years later when in January 1989 another pair of F-14s shot down two Libyan MiG-23 “Floggers” again over the Gulf of Sidra.

The United States Navy continued to rely on the F-14 throughout the 1990s and early 2000s, where it was utilized in strike escort and reconnaissance roles in Operation Desert Storm as well in Operation Deliberate Force and Operation Allied Force in the conflicts in the former Yugoslavia. The F-14’s final combat mission took place in February 2006 when two Tomcats were used in a bombing mission in Iraq.

The F-14 Tomcat was almost as much of a star in the 1986 film Top Gun as Tom Cruise, but a decade earlier Grumman had published cartoons that depicted a pilot – named Tom Cat of course – as a girl-obsessed playboy, while his Radar Information Officer (RIO), was the serious one who did everything but the flying. That likely led to the Maverick/Goose dynamic seen in the film.

While the F-14 was retired from service with the Navy, and supplanted by the Boeing F/A-18E/F Super Hornet, the Tomcat remains in use with the Islamic Republic of Iran Air Force.

In fact, an Iranian pilot, Jalil Zandi, has been credited with shooting down eleven Iraqi planes during the Iran-Iraq war, making him the true “top gun” with the F-14.

Only a handful of the planes, which were purchased by the Imperial Iranian Air Force in the 1970s, remain in operation but according to reports these aircraft have flown escort missions in Syria proving that even after nearly 50 years the Tomcat still has sharp claws.

While the Islamic Republic will likely try to keep the Tomcats flying, in America the aircraft has been all but declawed. When the F-14 was retired, most of the aircraft and spare parts were destroyed to ensure they couldn’t find their way to Iran. However, a couple dozen remain in various museums around United States.