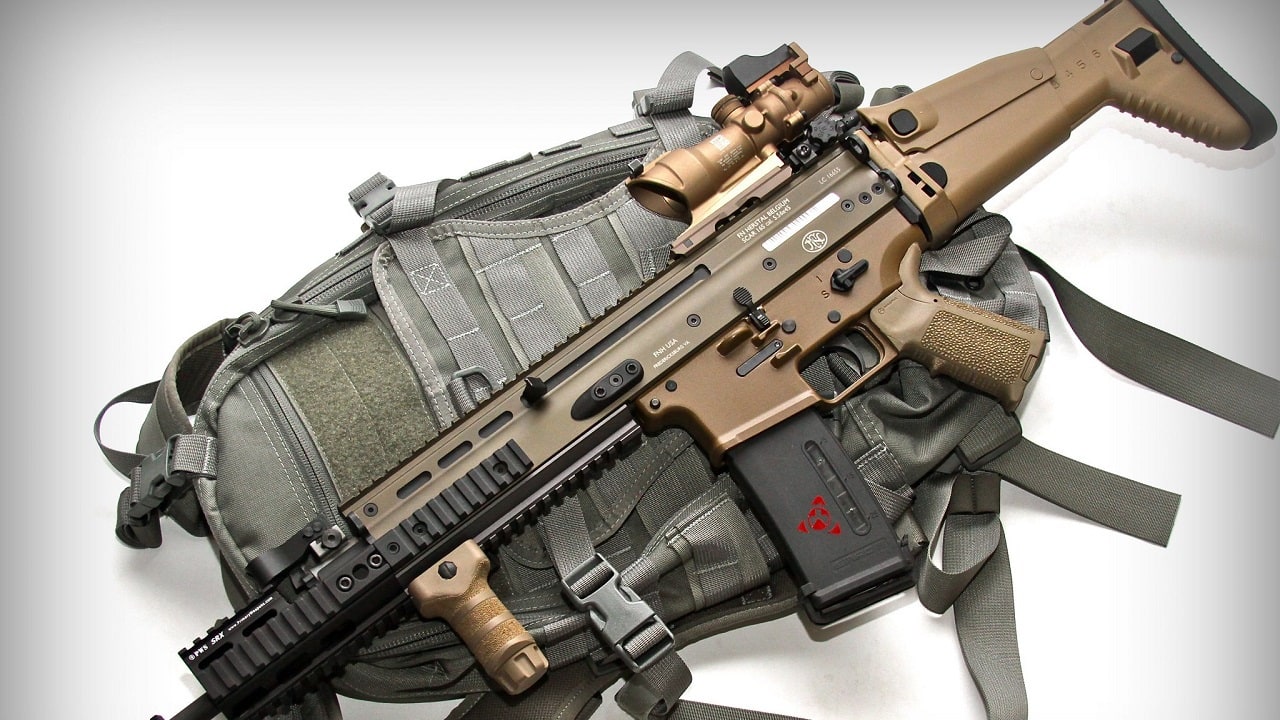 What makes the FN SCAR 16S truly special? The FN SCAR 16S is a solid tactical carbine. In fact, it’s been used in combat by the United States military since 2009, and has been deployed by a wide range of SOCOM units—from Special Forces to U.S. Army Ranges. Question is: Why do special operatives use the FN SCAR? And is it worth the heavy price tag? Keep reading to find out…

The FN SCAR 16S is perfect if you need to shoot quickly and accurately, partly thanks to some of its special features. The big brake on the end of the barrel nearly eliminates muzzle rise, and it’s designed in a way that you can rack without breaking your grip or cheek weld to get more accuracy and speed with follow-up shots.

With all the rounds I’ve fired, my average group size from 100 meters is around 1.6 inches! It has good accuracy with cheap ammo and surprisingly great accuracy with heavier bullets as well. If you’re looking to shoot from a distance, adding an optic can help maintain the accuracy from 400+ meters!

The FN SCAR 16S is incredibly reliable. I’ve fired over 800 rounds with no problems, even when the gun was hot! No malfunctions with feeding, firing, or ejecting to report; it ran smoothly with every round I fired. I’d say it’s even more reliable than the AR platforms! The gas piston system runs clean and is easy to service. It is a consistent, well-built rifle that does everything you’d expect it to, without fail. There’s no doubt in my mind that it will have a very, very long service life.

This rifle is easy to use, easy to maintain, and incredibly versatile. It’s well-balanced and light, allowing for quick handling and shooting. The ambidextrous controls are fully operable and can be adjusted to adapt to any shooter or position. The controls are not in the way or otherwise burdensome, as can sometimes be the case with ambidextrous controls. The reciprocating charging handle does take a bit of getting used to, and you have to be careful not to pinch your fingers between the handle and the holosight! The big controls make reloading and switching from safe to fire quick and easy, even when you’re wearing gloves.

This is good, because the rail tends to heat up quickly, so you probably won’t want to fire it excessively with bare hands! The action is a short-stroke gas piston with a rotating locking bolt, and the short pull length makes for easy hammer pairs. One of the best things about the SCAR is its adjustability.

The cheekpiece and stock are both adjustable, and once you get them to the right position the rifle fits like a glove.

The buttstock folds quickly, and the gun is fully operational like this. It also comes with four Picatinny rails, which let you get creative with scopes, lasers, and lights! Cleaning is simple, it takes five minutes max to disassemble and clean it fully.

Overall, the handling and controls on the SCAR are clearly superior when compared to the AR-15!

The trigger on this gun is fantastic. The reset is quick, so you can shoot as fast as you want! The module is made of composite polymer, and the controls are big and easily accessible. Even the trigger guard is enlarged, allowing you to wear gloves without impeding use.

The SCAR has either a 10 or 30 round capacity and is compatible with most AR-15 magazines. Be careful with Gen 2 PMAGs, however, because they could break the gun if used excessively! It’s made specifically for FN and standard USGI mags, but I haven’t had any issues, feeding or otherwise, with any magazine I’ve used!

Reloading is simple, mainly due to the large controls and the easily flowing side charging handle. There’s a magazine release on both sides, to accommodate left and right-handed shooters alike. Your hand naturally flows to the handle after releasing the magazine; you don’t have to move the rifle, your line of sight, or even break your cheek weld to reload!

The release is recessed and shielded on both sides, which keeps it in line with the receiver without hiding the release button.

This is a pretty lightweight rifle, around 7.25 lbs. The barrel length is just over 16”, and the overall length is between 27.5” and 37.5” depending on how you adjust the pull length and stock.

There’s not much to discuss in terms of recoil, because the SCAR is essentially recoil free! This is pretty typical of a short-barreled, gas-powered .223. The big brake on the end of the barrel is really all the recoil management this gun needs.

One thing’s for sure: this is NOT a budget rifle. The MSRP on the SCAR is around $3,299. While there are other similar home defense rifles on the market for less, the SCAR truly offers the most in versatility, accuracy, and overall value. It’s definitely expensive, but a great, reliable, and accurate firearm if you can swing it.

The FN SCAR 16S is a reliable, easy-to-use, and versatile firearm. It operates exactly as you’d expect it to, and is something you can rely on.

However, this is not a cheap rifle. You could find something similar on the market for much less, but the SCAR is truly unmatched. If you can get past the price tag, it’s definitely a keeper that is guaranteed to last for generations. The best home defense rifles are durable, lightweight and accurate, and the SCAR hits all these marks.