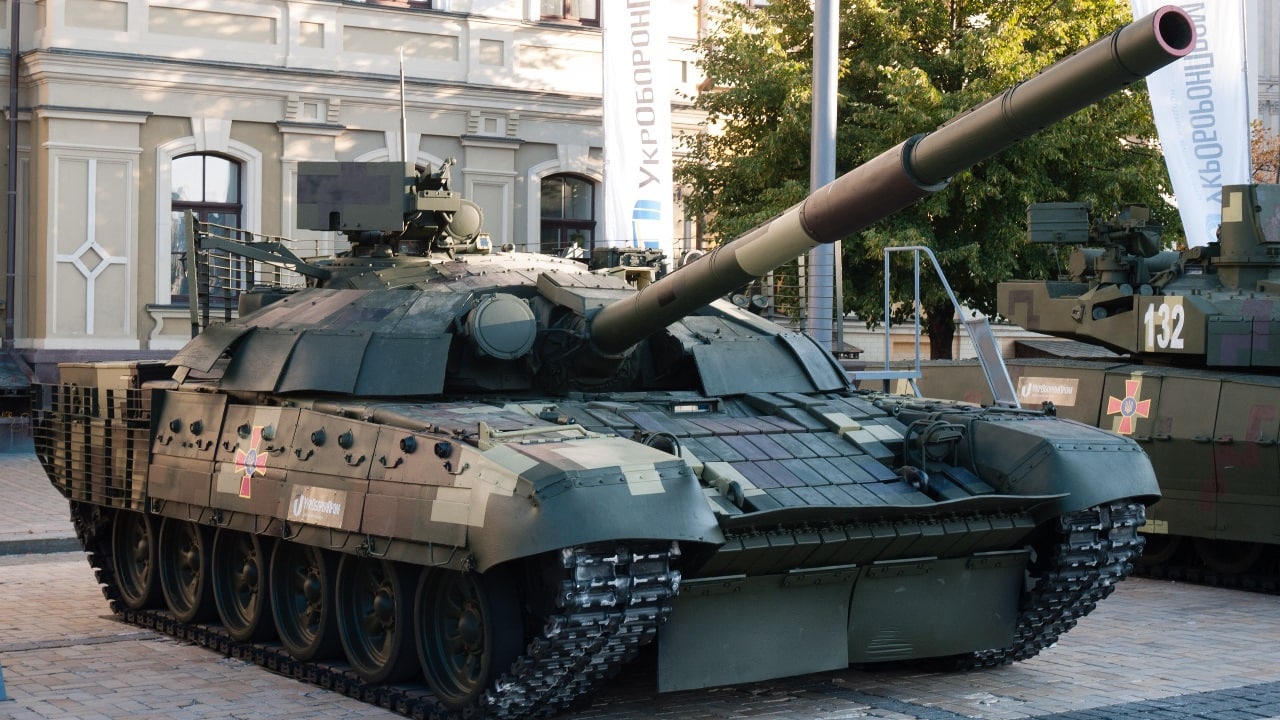 In battle today, Ukraine is mostly fielding variants of the T-64 tank in its struggle against the Russian invasion. This mid-Cold War “super tank” manufactured in Kharkiv is mostly facing Russian T-72s, a more affordable successor produced in the UralVagonZavod factory in Russia, which has since undergone many rounds of upgrades.

But it’s a bit more complicated than that. Both sides are using speedy T-80 tanks. And Ukraine’s army and national guard also operate hundreds of their own T-72s, including two distinctively customized variants of their own design featuring advanced Ukrainian missiles and reactive armor.

The U.S. has confirmed it will help Ukraine acquire additional Soviet-style tanks, as requested by Ukrainian Pres. Zelensky. These will almost certainly be T-72s from NATO countries, as T-64s and T-80s are not available. Bulgaria, the Czech Republic, and especially Poland are likely potential donors, as explained in a companion article, though there are additional possibilities.

The 45- to 50-ton T-72 has a crew of three (commander, driver, gunner) and is armed with an autoloading 125-millimeter 2A46 gun as well as heavy and medium machine guns on the turret. A staggering 25,000 T-72 have been built, with dozens of subvariants in service across the globe from Nicaragua to Poland, India to Ethiopia.

But the T-72’s lighter weight does make it less expensive to operate, easier to deploy (ie. they don’t threaten to collapse average European bridges), and less fuel-hungry—more practical considerations for tank operators not expecting to war with NATO. It also has a lower profile, standing just 2.2 meters tall.

Later T-72 models, like the Russian T-72B3, sport active protection systems and explosive reactive armor (ERA) to mitigate the effectiveness of portable anti-tank weapons, better thermal imagers and sights, and the capability to fire laser-guided missiles out the gun barrel for better long-range capability. Some may also receive advanced tungsten or uranium discarding sabot shells to have a chance at penetrating the western tank’s armor.

However, all T-72s retain the vulnerability that their ammunition is stored in a carousel-style autoloader crammed close to the crew. That leaves those shells susceptible to detonating catastrophically when the turret is penetrated, often blasting the turret clean off and killing the crew.

Kyiv inherited around 1,310 T-72As, T-72AVs, and T-72Bs after the dissolution of the Soviet Union. But for years it chose to keep only the more capable indigenous T-64s in operational service.

Ukraine instead sold around 870 T-72s to states in Africa and Asia, including Congo DRC, Ethiopia, Georgia, Kenya, Myanmar, Sudan, South Sudan and beyond. In one notorious incident, Somali pirates seized the cargo ship MV Fainia with 33 Ukrainian T-72s onboard. After a five-month standoff, the shipowner paid a $5.2 million ransom and the tanks were delivered via Kenya to South Sudan.

Ukraine’s military operated just around 20 T-72s in driver/mechanic training units and kept the balance in storage. But after Ukraine lost hundreds of tanks in clashes with Russian troops and their separatist proxies in 2014, Kyiv decided to bring its T-72s back into service. By the end of December 2015, there were 372 T-72s in service according to Ukrainian military historian Mikhail Zhirikhov—a number which may have increased to 500 by 2021.

The T-72 versus was issued to the tank battalions of new motorized and mountain infantry brigades, and the newly-raised 3rd, 4th, and 5th Tank Brigades. Dozens of T-72s also serve in the National Guard of Ukraine.

Ukraine’s military started out mostly with T-72A and T-72AVs with the older-style ‘Dolly Parton’ turret design. The AV subtype, though, is enhanced with 227 bricks of dated Kontakt-1 explosive reactive armor.

Armor plants in Kyiv and Lviv have delivered two indigenous variants of the A and B models to the Ukrainian Army called respectively the T-72AMT and T-72UA1.

Ukrainian T-72AV on the move during this war (date and location unknown). This is believed to be a rare modernized T-72AV due to the lack of IR searchlight (a few T-72AVs were modernized with thermals recently). Even if it is a standard T-72AV, Ukraine does not use a lot of these pic.twitter.com/uyFGCK5Jd1

Both are fitted with old Kontakt-1 ERA bricks on the hull, while the turret is girded with Ukraine’s next-generation Nozh (Knife) Shield 72 linear-shaped-charge ERA. Nozh is designed to reduce collateral damage risks and remains more effective after multiple hits or when repelling tandem-charge warheads than traditional ERA.

The T-72AMT also has cage armor on the more vulnerable rear hull and turret that may defeat rocket-propelled grenades that would otherwise penetrate.

The 2A46 gun has also been modified to launch a Ukrainian-developed Kombat missile with a range of 3.1 miles and penetration of 750mm RHA equivalent using a tandem-charge warhead to defeat reactive armor. This is bundled with a long-range 1K13 sight (500 meters at night) compatible with the missile. Kombat is steered semi-automatically by transmitting guidance instruction to a reflector on its tail using the laser.

Made in Ukraine for Ethiopia—Used in War by Both

As part of the order, Ukraine specifically upgraded 35-40 of these to the T-72UA1 model featuring the Nozh/Kontakt-1 ERA, a 10KW auxiliary power unit, and a smaller but more powerful 1,050hp engine designed for reliable operation in high-temperature climates.

Ethiopian T-72UA1s has since been used in combat in the bloody Tigray War, with at least one captured by Tigray rebels and featured in a music video.

This T-72UA1 was taken back to Tigray and has now been used as a prop in a music video. Thank you to one of our followers to pointing the video out to us. https://t.co/I80ej8tCto pic.twitter.com/aJHQ5LaJSR

But back in 2014, as fighting engulfed Eastern Ukraine, Ukraine diverted T-72UA1s into Ukrainian military service, including to the war-torn village of Shyrokyne to assist in the defense of Mariupol.

Since then, the Kyiv factory has delivered or upgraded more T-72UA1s, now featuring additional modifications in common with the AMT, notably including Kombat-missile capability.

Ukrainian T-72s of all marks are seeing action in the 2022 war. For example, a recent journalistic account reports a Ukrainian T-72 concealed in trees next to the E40 highway west of Kyiv destroyed eight Russian APCs in an ambush.

Furthermore, as of April 2, Ukrainian forces are confirmed to have captured at least 102 Russian T-72s (and likely many more), mostly advanced T-72B3 and older T-72Bs. That’s enough to form an entirely new tank brigade, though they may instead be used to replace losses for units on the frontline.

At the same time, confirmed Ukrainian T-72 losses amount to five destroyed and five captured, half of them improved T-72AMTs. These were reported near Severodonetsk in the Donbas region, Chernihiv in northeastern Ukraine, and the Hostomel suburb of Kyiv. The low figure reflects the larger role played by the T-64B series tanks in Ukraine’s military.

Nonetheless, between captured T-72s and those donated by NATO, the iconic Russian tank seems likely to retain an important role in providing additional armor support to Ukraine’s defenders.