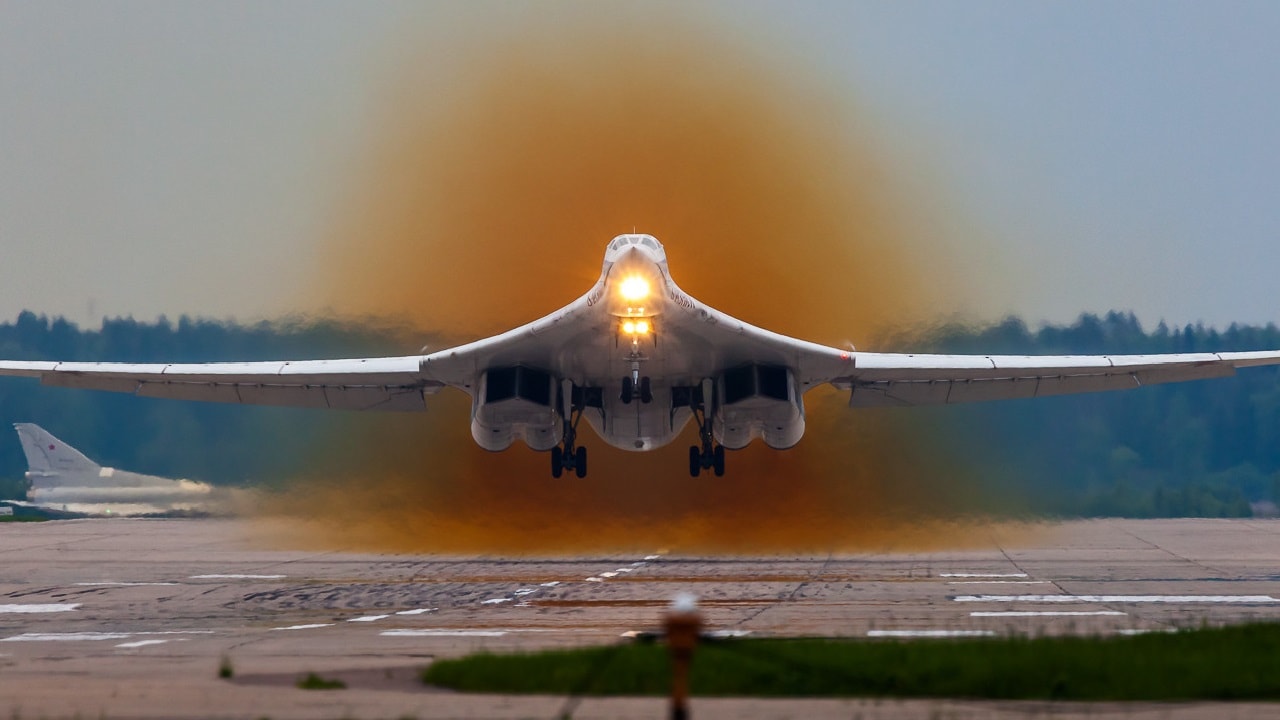 Russia’s Tupolev Tu-160 bomber has a patchy history, having undergone numerous facelifts resulting in several variants since its first flight in 1981. The “Blackjack” strategic nuclear-capable bomber serves more as a delivery platform for conventional land-attack cruise missiles these days, which it launched at targets in Syria during Russia’s incursion against rebels there.

Could It Deliver Nuclear Weapons in Ukraine?

While the Blackjack was seen on video flying over western Russia on the way to Ukraine on April 18, it has not played a big role in the war so far. Although its appearance had some wags worried that Vladimir Putin was reminding the world that the Tu-160 could fly a nuclear-equipped mission over Ukraine.

This Bomber Is Big with Powerful Engines

The first thing that jumps out at you when it comes to the Tu-160M2 is its mammoth size. It has a 177-foot wingspan and is powered by four mighty Kuznetsov NK-32 afterburning turbojet jet engines with 55,000 pounds of thrust, considered the most robust propulsion system ever placed on a combat airplane.

This results in a top speed of MACH 2, depending on the degree to which the wings are swept back. There are three positions for the wings. At 65-degrees, the airplane hits supersonic speed with afterburners.

Long-range Can Threaten the Western Hemisphere

The Blackjack has a range of 7,500 miles. This can get it close enough to the United States to fire nuclear-tipped Kh-55MS cruise missiles. There is room for up to twelve Kh-55 cruise missiles in rotary launchers with 250-kiloton warheads. The Blackjack can also carry radar-guided ballistic missiles that could “kill a carrier.”

36 Blackjacks were built and 17 are in service with Russia. The Tu-160 is also known as the “White Swan,” for its white paint that is designed to reflect thermal radiation. It reminds observers of the U.S. B-1B bomber. The Tu-160 has shown it can conduct intercontinental flight, having completed a record-breaking mission from Murmansk to Venezuela in 2008. It has accomplished other records for range and duration of flight.

The Russians Keep Upgrading It

Substantial upgrades to the bomber began in 2013. Three Blackjacks received new navigation and targeting technology. The Tu-160M variant was completed in 2015 and then the Tu-160M2 with a better cockpit and new radar was finished in 2017 with the previously mentioned NK-32 engines.

The Blackjack has also taken flights designed to alarm the U.S. Air Force, having been based near Alaska and once partaking on a flight to Nicaragua that went over Colombian air space.

What’s the Best Use Case?

It’s not clear what Vladimir Putin’s air force has in mind for the best use of the Tu-160. Is it mainly for demonstration purposes to show that Russia could embark on a nuclear strike? Is it more for conventional reasons to patrol in the western hemisphere and be a thorn in America’s side? Or is it for a show of force missions over Ukraine? We can assume that it is likely launching land-attack cruise missiles into Ukraine. This is probably taking place from Russian air space since Moscow would not risk the possibility of a Blackjack being shot down since it does not possess the airplane in large numbers.

Thus, the Tu-160 has curious mission parameters. It could conceivably be outfitted with hypersonic weapons someday, and this would put a chill in U.S. Air Force aerial battle planners, especially if the hypersonics are equipped with nuclear warheads. So, the Blackjack still has a purpose in the 21st century and will likely continue to be upgraded to different variants with improved capabilities in the coming years.