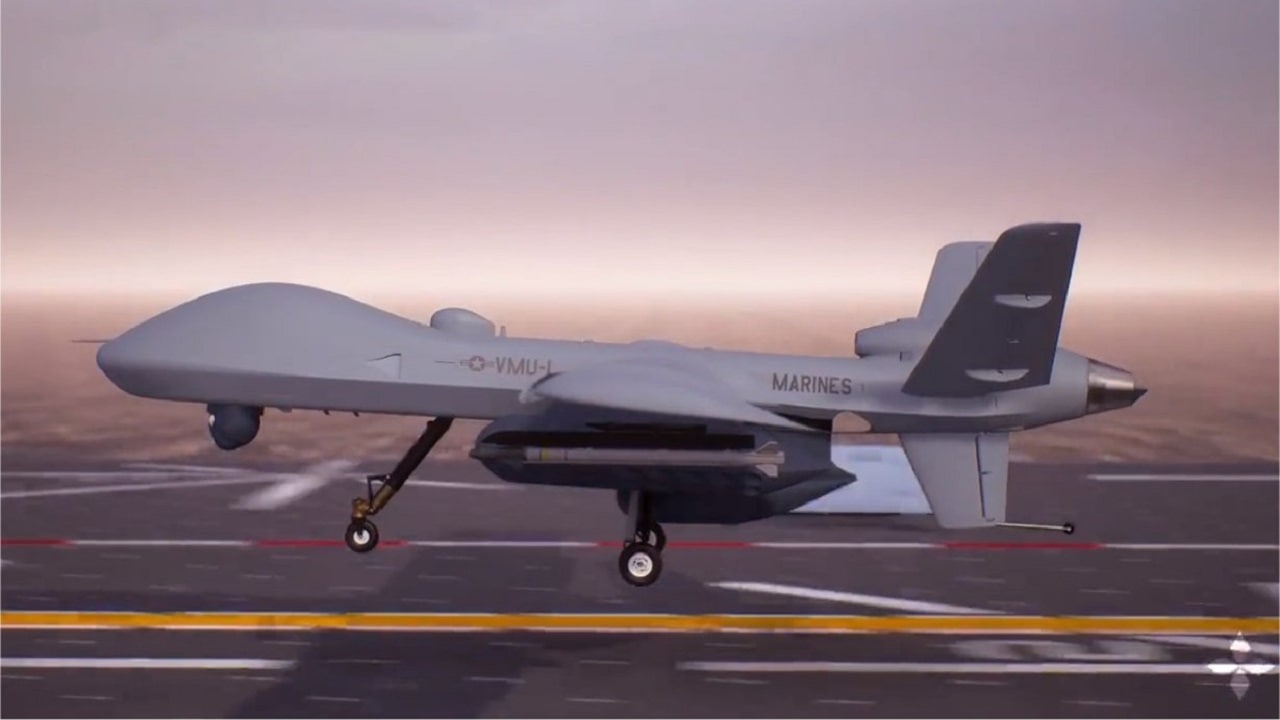 MQ-9B STOL -A Game-Changer for the US Military? General Atomics recently unveiled a new iteration of the MQ-9 line explicitly designed for short take-off and landings aboard naval flattops, dubbed the MQ-9B STOL. The STOL portion of the name reflects this aircraft’s unique Short Take-Off and Landing capabilities, making it uniquely suited for service aboard amphibious assault ships and small aircraft carriers.

These remotely-piloted aircraft (RPA) offer significant loiter time, sensor range, and munitions carrying capabilities similar to those that made the original MQ-9 a legendary platform in the Global War on Terror since their introduction in 2007. The MQ-9B is rated to carry a 4,800-pound payload across 9 hardpoints (one on the center-line, and four under each wing).

Now, General Atomics is setting its sights on the United States Marine Corps, among other potential buyers, offering up the MQ-9B STOLas a better option than their existing maritime MQ-9A Reaper for some applications. Its short take-off and landing capabilities make this aircraft well suited to support Marine Corps operations in the Pacific, where China’s aggressive tactics and rapidly expanding military have posed a threat to stability throughout the region.

The MQ-9B STOL can fight ships, submarines, and maybe even other aircraft

Promotional videos released by General Atomics show their new MQ-9B STOL carrying a variety of munitions, including the AGM-114 Hellfire we’ve come to expect to see under-wing on MQ-9 variants, as well as the much more interesting inclusion of what appears to be an AIM-9 Sidewinder missile.

While remotely piloted aircraft aren’t commonly associated with air-to-air combat due in no small part to the short period of lag created as the aircraft’s sensor and control data is transmitted to and from the pilot and enlisted sensor operator sometimes located thousands of miles away the concept itself isn’t unheard of.

In 2017, a U.S. Air Force MQ-9 Reaper reportedly successfully shot down another airborne drone using an infrared-guided air-to-air missile. The missile itself wasn’t disclosed, but many assumed it used either the FIM-92 Stinger missile or an AIM-9X sidewinder. Then in September of 2020, another U.S. Air Force MQ-9 successfully shot down a drone cruise missile using an AIM-9X missile. So, while RPA’s like the MQ-9B SeaGuardian aren’t thought of as air-to-air assets, there’s clearly some utility in arming these vehicles with such weapons.

The MQ-9B SeaGuardian is already capable of deploying sonobuoys, which are used to detect and track enemy submarines, which combined with nearly 30 hours worth of loiter time, can make the MQ-9B STOL a valuable tool for protecting flattop vessels from attack, especially as amphibious assault ships don’t often sail with the same degree of protection you might find in a carrier strike group.

The STOL system for the MQ-9B can actually be installed on existing SeaGuardians through a wing and tail kit that General Atomics says can be added in less than a day. The wings on the STOL version of the MQ-9B fold upward, like most carrier-capable aircraft, to allow for storage below decks alongside the helicopters and F-35Bs the Marine Corps intends to operate from these vessels. Thanks to the STOL kits, these RPAs can take off and land from the deck of a vessel without any need for a catapult or arresting gear.

Imagine taking the hard top off your Jeep. You lift it off, stow it in your garage and now you’ve got an open vehicle. If it rains, you put the hard top back on. We are the same. Take a standard MQ-9B, put the STOL kit on, and then go fly, said GA-ASI President David R. Alexander.

But can the MQ-9B STOL survive in hostile airspace?

The MQ-9B is about the size of an A-10 Thunderbolt II, and is operated by a commissioned pilot and an enlisted sensor operator. These teams usually swap out every eight hours or so to ensure the aircraft is piloted by fresh eyes, while the MQ-9B itself remains airborne. These aircraft have proven invaluable in the uncontested airspace over the Middle East, but concerns remain about their ability to survive in contested airspace if a conflict with China were ever to kick off.

However, last year I spoke with an Air Force MQ-9 pilot who asked to leave his full name out of the record for Popular Mechanics. He believed the MQ-9 could prove very useful in such a conflict thanks to the standoff distance allowed by the platform’s sensor reach.

“When we think about a near-peer fight, we are not necessarily looking for one or two individuals anymore. We are looking for main battle tanks, self-propelled artillery, and early warning radar, he said.  Nobody can see those things further out than [the Reaper] can.” 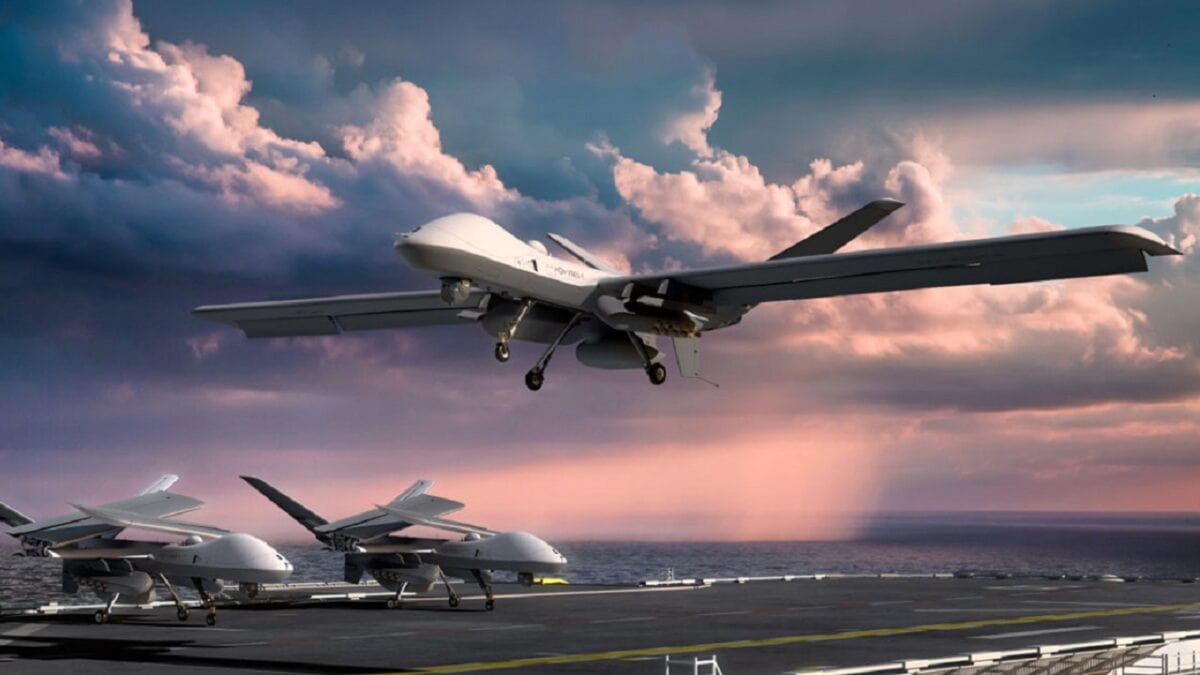 The MQ-9B STOL may not be the most survival combat aircraft, but its long loiter time, payload capabilities and onboard sensor suite can make it a valuable early warning aircraft that can take greater risks than crewed platforms, while still engaging targets as necessary.

If tasked, we can fly outside most engagement zones and still see all the things we need to see, and we can provide that imagery to a team of analysts who can exploit that information and give it to decision makers, whether that’s military or political, to effect more strategic level objectives.