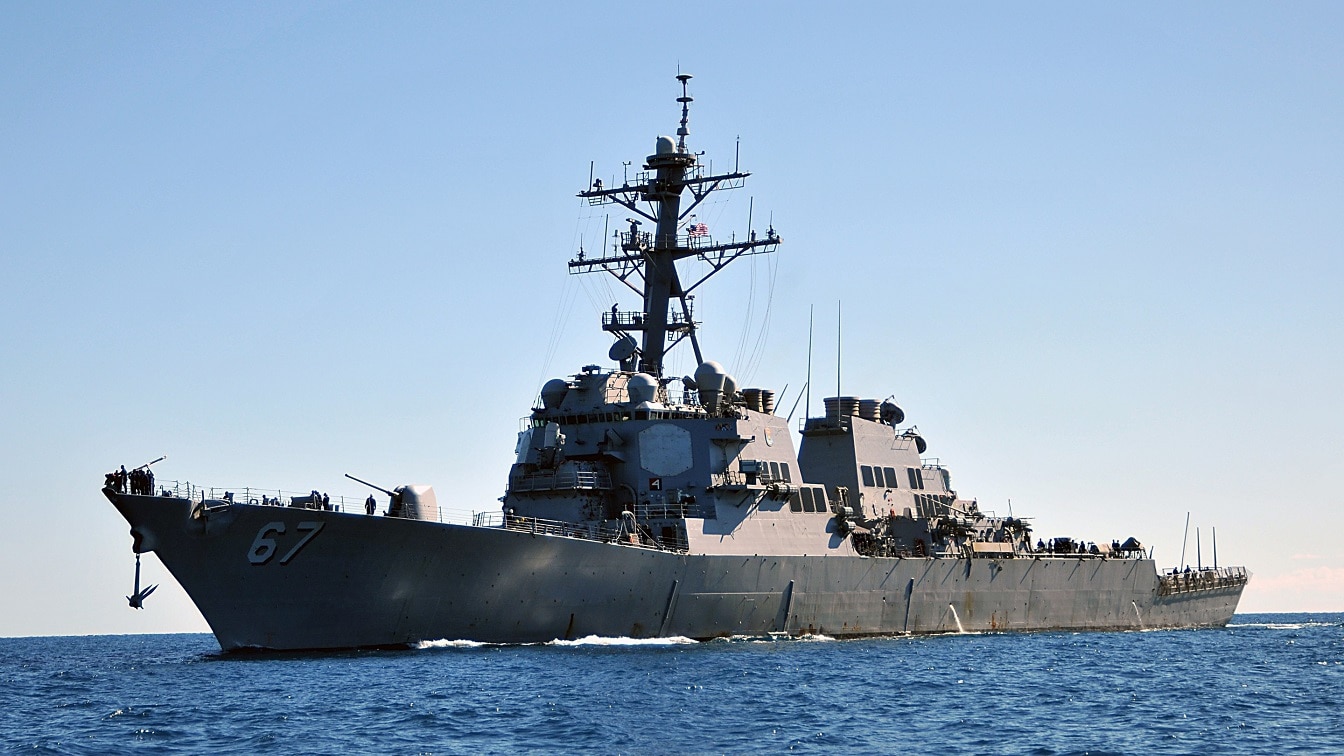 A video being widely circulated by news outlets depicts a small IRGC Boghammar vessel turning head-on toward the USS Sirocco. The Spearhead-class expeditionary fast transport USNS Choctaw County was also positioned dangerously close to the Iranian vessels during this encounter. The IRGC’s boats’ “dangerous” and “unsafe and unprofessional” behavior comes amidst escalating tensions between U.S. and Iran.

Following Monday’s incident, the U.S. Navy also publicized a similar encounter that occurred in March. According to the Navy, three IRGC ships remained dangerously close to U.S. Naval and Coast Guard vessels as they traveled through the Strait of Hormuz to exit the Persian Gulf. In this incident, the Navy said that “The two U.S. Coast Guard cutters issued multiple warnings via bridge-to-bridge radio and deployed warning flares.”

The Strait is a strategic geographic chokepoint that sees large portions of the world’s oil supplies pass through its waters. Nearly a fifth of the globe’s oil consumption ventures through the Strait, according to the U.S. Energy Information Administration. Tehran has launched attacks targeting international vessels in the region in the past, aiming to demonstrate its capability to interrupt the flow of oil and upset the global economic market.

Iran Demonstrates Its Power to Disrupt

In recent years, the IRGC has perpetuated several attacks targeting international vessels off the Omani coast. In 2021, Iran was suspected of carrying out an attack targeting an Israeli-managed tanker in the Gulf of Oman. The U.S., Israel, and the UK blamed Iran for the attack, which killed two crew members. Two years earlier, four commercial ships were attacked off the port of Fujairah. Two of the tanks were owned by Saudi Arabia and one by the United Arab Emirates.

In addition to its tanker attacks, the IRGC targeted a U.S. Naval vessel in 2021. In November, the Pentagon reported that an Iranian helicopter had come within 25 feet of the USS Essex (LHS-2) in the Gulf of Oman. Flying as low as ten feet off the water’s surface, the helicopter circled the Essex three times. These provocations have coincided with attempts to revive the 2015 Joint Comprehensive Plan of Action (JCPOA) in Vienna. The joint U.S.-Iran nuclear negotiations have recently halted, and Tehran is rapidly approaching its nuclear breakout time.

Last week, the Wall Street Journal reported that the U.S. covertly coordinates with Israel’s Defense Forces when it carries out some of its airstrikes targeting Iranian assets in Syria. The IDF has targeted drone factories and weapons-smuggling routes in Syria that have aided Iran and its regional proxies. America’s reported collaboration or at least knowledge of operations that destroyed Iranian assets could have catalyzed this escalatory incident at sea. Iran typically employs acts of retaliation against its adversaries.

“The Iranians have a long, consistent history of harassing ships passing through the strait and within the waters surrounding the Arabian peninsula (the Persian Gulf, Gulf of Oman, Gulf of Aden, and even out into the Arabian Sea),” explained Dakota Wood, a military analyst at the Heritage Foundation.

“U.S. naval ships rigorously observe internationally-recognized ‘rules of the road’ because their captains and crews realize the media interest in any incident and the potential for diplomatic and military consequences. Should something happen, the US Navy will want to have inconvertible proof that they were not only acting per legal standards but also professionally and with maximum restraint. But it is also the case that Navy skippers are ultimately responsible for the safety of their ship and crew,” Wood explained to 19FortyFive.

“So, they closely observe the configuration of Iranian craft (what weapons are they carrying), the nature of their movements (vessel’s or craft’s speed and course, accounting for the distance between the vessels and maneuverability of the craft involved). As you captured in your report, the US Navy commander warned the Iranian craft by ship’s horn, radio traffic, and highly visible flare…all steps to avoid having to use weapons to stop a threat to the ship and crew.”

Wood also noted that “[T]he Cyclone-class patrol ship carries two 25mm single-barrel ‘chain guns,’ two 40mm grenade launchers, and two .50 caliber heavy machine guns. They have the firepower to engage an Iranian patrol craft but the captain will do everything possible to avoid an engagement.

In these harassment situations, the Iranians are trying to bait the U.S. into doing something foolish, even if it means placing their own people at risk. The Iranian regime hopes for something they can use for propaganda, to have evidence that the ‘Great Satan’ is provoking war.

It’s a dangerous business in those waters, but only because the Iranians look for every opportunity to create incidents that feed their narrative (domestic and international) and help them to push forward their political objectives. Plus, they look for revenge or payback opportunities to strike at the U.S. for its support to Israel, Saudi Arabia, and even Iraq.”

Note: This piece has been updated to include extensive expert comments by Dakota Wood from the Heritage Foundation.