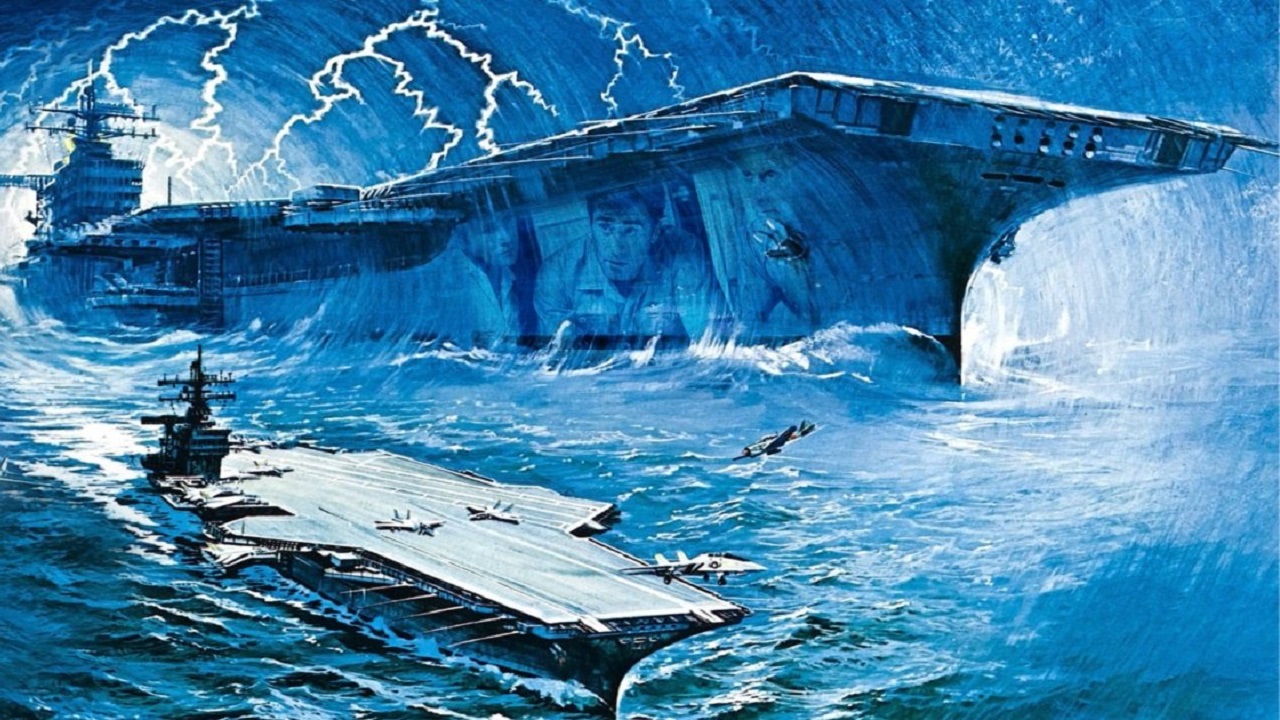 Set and filmed aboard the USS Nimitz (CVN-68), The Final Countdown features Hollywood legend Kirk Douglas and a pre-West Wing Martin Sheen. Unlike most war films, and certainly unlike most films enjoying the cooperation of the Department of Defense, fantastical elements drive The Final Countdown’s plot, rooting the film squarely in the science-fiction realm. In the film, which begins in 1980, the Nimitz departs Pearl Harbor to conduct exercises in the Pacific Ocean.

At sea, the Nimitz encounters an electrical storm/vortex, which draws the nuclear-powered carrier inward. The ship’s radar and electrical equipment go haywire, leaving the crew to speculate that a nuclear strike may have hit Hawaii. The Nimitz’s commander, portrayed by Kirk Douglas, launches an RF-8 Crusader and a pair of F-14 Tomcats. The airborne, modern jets help to piece together what’s really going on. The electrical storm/vortex was actually a time warp, which dragged the Nimitz back through time, to December 1941 in the moments preceding the Japanese attack on Pearl Harbor.

What does one do, with modern war fighting tech, against outdated 1940s prop-planes? Naturally, Kirk Douglas and Co. engage full heartedly, determined to prevent the Japanese assault at Pearl Harbor.

The film was shot over two five-week periods in 1979, at Naval Station Norfolk, Naval Air Station Key West, and off the coast of the Florida Keys. Aviation enthusiasts remember The Final Countdown as a cinematic gem, replete with carrier operations and aerial combat. In all the film features a smorgasbord of different US airframes: EA-3B Skywarrior; F-14 Tomcat; E-2 Hawkeye; A-6 Intruder; S-3 Viking; A-7 Corsair II; F-4 Phantom II; RA-5C Vigilante; SH-3 Sea King; RF-8G Crusader. Yet perhaps the most noteworthy aircraft appearing in the film were T-6 Texans, modified to resemble the Japanese Mitsubishi A6M Zero and the Nakajima B5N Kate, and the BT-13 Valiant modified to resemble an Aichi D3A Val. Complete with Japanese color schemes, the vintage craft go head to head with F-14 Tomcats from the VFA-103 “Jolly Rogers” squadron.

To film aerial sequences, the crew mounted Panavision cameras on various aircraft, including a Bell 206 Jet Ranger helicopter, a Learjet 35, and a B-25 bomber that was modified as a camera platform. Of course, the aerial sequences and the film quality are paired down relative to modern sequences, like those found in the Top Gun franchise – but that’s not necessarily a bad thing. The simple production is somewhat refreshing, allowing the viewer to just observe these jets in action, without the frantic cutting and editing so prevalent in modern action features. Equally refreshing, there’s not a hint of CGI technology. Just full-on live action.

The Final Countdown fared reasonably well at the box office, grossing $16 million against a budget of $12 million. The experience must have gone well enough, as the Navy and the Department of Defense teamed up with Hollywood again, just six years later to create 1986’s highest-grossing film, the seminal Top Gun. While Top Gun persists as the gold standard in military aviation features, The Final Countdown endures as a cult favorite for those with a deeper appreciation of film and aviation.