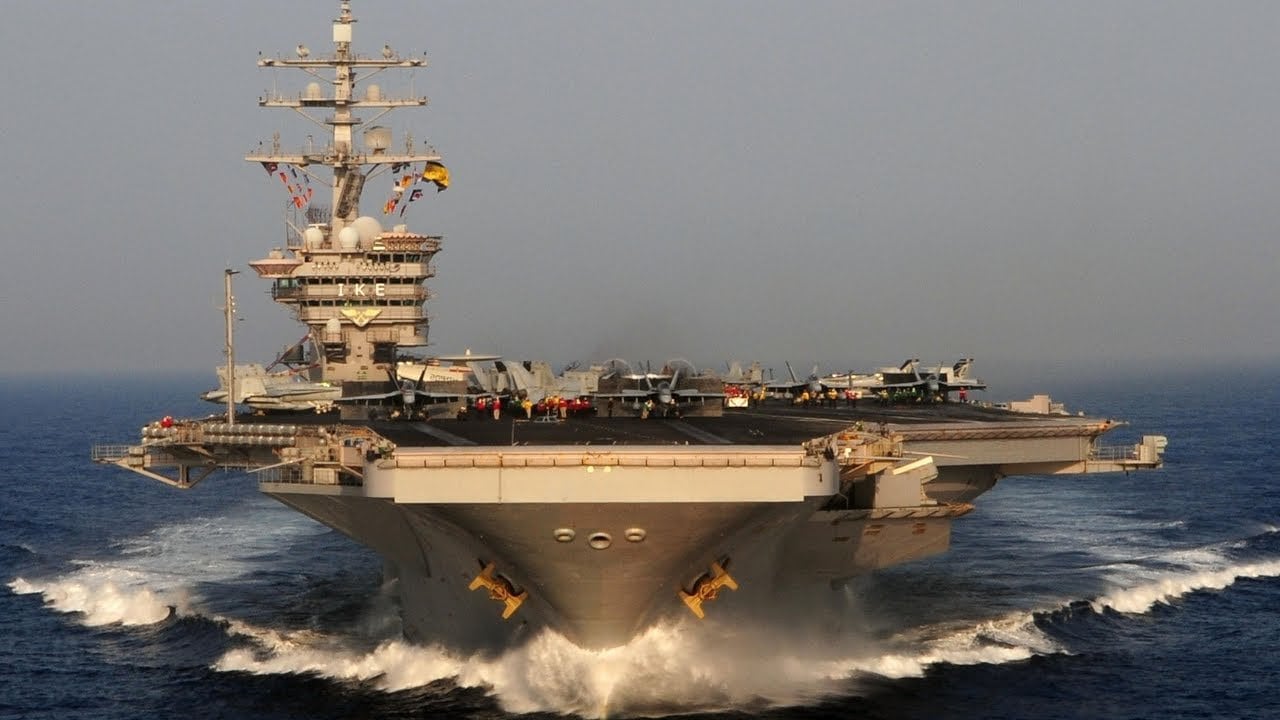 USS Dwight D. Eisenhower – The Might Ike – The Navy Carrier Named for One of America’s Top Army Generals: It is doubtful any future United States Army tank or even armored personnel carrier (APC) will ever be named for a “Navy man,” yet the second vessel of the United States Navy’s Nimitz-class, the Cold War-era class of supercarriers, does honor a past president who was also General of the Army. Sailors serving onboard the USS Dwight D. Eisenhower (CVN-69) have certainly managed to put any Army-Navy rivalry aside.

Of course, as first the Supreme Allied Commander in Europe during World War II, and later as president of the United States, Eisenhower saw the need for the military services to work together for a common goal, and to further unify in the post-war world.

That sentiment is still shared with the CVN-69, the flagship for Commander, Carrier Strike Group (CCSG) 2, which cites the words of the military leader, “We know that our purpose is a just and moral one, for we seek only peace with freedom and we can succeed in this great endeavor only if each and every one of us is willing to give the full measure of courage, sacrifice, work and vision, not in a divided effort but working together in pursuit of our common goal.”

Originally named USS Eisenhower, following the lead vessel of the class USS Nimitz (CVN-68), during her construction the name was changed to its present form. As with the other carriers of her class, she was constructed at Newport News Shipbuilding Company in Virginia and since entering service has been overhauled twice.

CVN-69 was originally authorized by Congress in the fiscal year 1970 and was christened on October 11, 1975, by Mamie Doud-Eisenhower, the widow of the nation’s 34th president, and commissioned in October 1977.

She took part in a sixth Mediterranean deployment in 1990, which coincided with the Dwight D. Eisenhower Centennial that celebrated the late president’s 100th birthday.

Since her commissioning, the USS Dwight D. Eisenhower has been deployed in numerous combat operations around the world, beginning with Operation Eagle Claw during the Iran hostage crisis in 1980. Just two years later the nuclear-powered carrier participated in the June 24, 1982 evacuation of the U.S. Embassy staff from Beirut, Lebanon during that nation’s bloody civil war.

Following Iraq’s invasion of Kuwait in 1990, CVN-69 made history when she became only the second nuclear-powered aircraft carrier to transit the Suez Canal. Mighty Ike then became the first U.S. Navy carrier to conduct sustained operations in the Red Sea and was ready to respond in the event that Iraq invaded Saudi Arabia. The carrier also provided multi-national operations with coalition forces following Operation Desert Storm.

As a carrier named for a president and U.S. Army five-star general who saw the need for inter-service cooperation, it was serendipitous that she was then employed in the concept of “adaptive force packaging” in an operation with the U.S. Army 10th Mountain Division in September 1994. The division’s soldiers and equipment were loaded on board, where the Army and Navy worked together to spearhead Operation Uphold Democracy, the U.S.-led effort to restore the democratically elected government of Haiti.

It was just a month after completing the operations off the coast of Port-au-Prince, Haiti, that the carrier headed back to the Mediterranean for a six-month-long deployment where she launched aircraft sorties in support of Operations Southern Watch and Deny Flight against Iraq and Serbia respectively. That deployment also marked the first time that women had deployed as crew members of a U.S. Navy combatant. To date, more than 400 women sailors have served on board the Mighty Ike.

During the carrier’s deployment to the Arabian Gulf, the carrier performed her first combat ordnance delivery while operating in support of Operation Southern Watch in Iraq.

However, as the USS Dwight D. Eisenhower was undergoing her mid-life overhaul – the comprehensive refueling complex process conducted at Newport News – she was unable to take part in operations during the invasions of Afghanistan or Iraq. It wasn’t until late 2006, that she rejoined the U.S. Fifth Fleet, and has regularly been deployed to the region to support U.S. efforts in the region.

In 2020, the carrier shattered the U.S. Navy’s modern records for consecutive time at sea in response to the coronavirus pandemic. Dwight D. Eisenhower was only able to return to Norfolk Naval Station on August 9, 2020 wrapping up a seven-month tour in which she operated in the U.S. Fifth and Sixth Fleets. She has since headed out on a second deployment in the same readiness cycle, colloquially known in the fleet as a “double pump” deployment.

The Mighty Ike is currently scheduled to be replaced around 2029 when the second Gerald R. Ford-class carrier, USS Enterprise (CVN-80) enters service. Until that time, CVN-69 will continue to help maintain the peace.