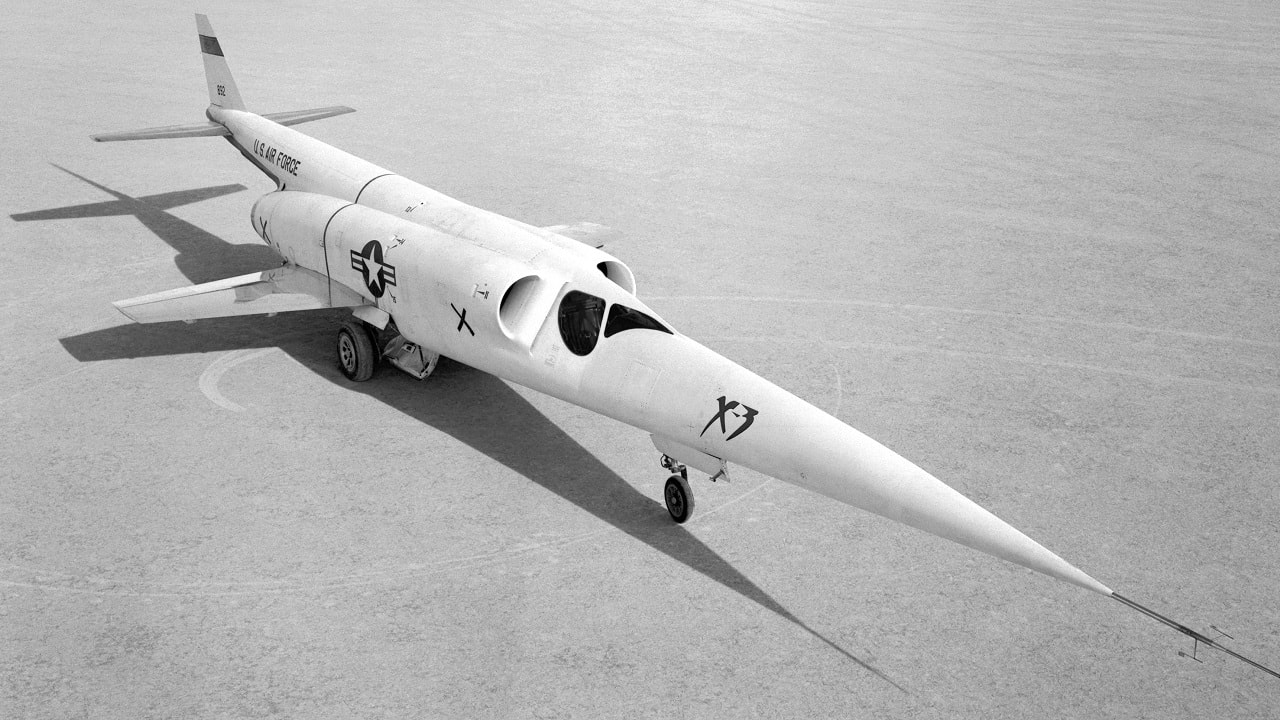 Douglas X-3 Stiletto on the lake bed at Edwards Air Force Base.

The Douglas X-3 “Stiletto” looks fast. Sleek and streamlined, resembling a rocket as much as an airplane, the X-3 was designed to hit a maximum speed of 2,000 miles per hour – all for the purpose of researching sustained supersonic speeds.

The jet had just one, little problem, however: It was slow. Severely underpowered, the X-3 couldn’t even hit Mach-1 in level flight. The X-3 had to edge its nose forward and fly downhill to pick up the momentum needed to reach Mach-1. Mach-2 was out of the question.

The X-3 began as an ambitious program. Intended to test and explore sustained Mach-2 turbojet propulsion, the X-3 was meant to take off from a runway under its own power. This feature alone marked a significant departure from the preceding X-1 and X-2 programs. While the X-1 did perform a few runway take-offs, both the X-1 and X-2 were primarily lifted to altitude aboard heavy bombers, the B-29 and B-50 respectively, before being dropped.

The X-3 program represented another structural first: It was the first aircraft ever built with large-scale use of titanium.

The X-3 Was an Informative Disappointment

Construction of two X-3s was approved in 1949. Initially, the jet planned to include the Westinghouse J46 engine. However, this engine couldn’t meet the X-3’s thrust, size, or weight requirements, so the J46 was swapped out for the lower-thrust Westinghouse J34. Whereas the J46 could supply 7,000 pounds of thrust, the J34 could only deliver 4,900 pounds with afterburners engaged.

Once the X-3 was completed, the end result was a visually distinct aircraft featuring an extremely long, slender shape, extended nose, and small trapezoidal wings. Indeed, the designers had intended to build the thinnest, slenderest shape possible. They wanted something with low drag at supersonic speeds. The extended nose was built to accommodate testing equipment. The jet’s semi-buried cockpit and windscreen were created to reduce the effects of the “thermal thicket” conditions that the jet was expected to encounter in the Mach-2 range.

The slender, titanium airframe was a disappointment. The X-3 was underpowered, difficult to control, and required a dangerously high take-off speed of 300 miles per hour. Its top speed fell well short of expectations. Just to achieve Mach 1.1, the X-3 had to make a 15-degree dive. To achieve Mach 1.208, the fastest speed the X-3 ever recorded, the jet had to dive at 30 degrees.

The X-3 was not capable of performing its design purpose: providing data on Mach-2 speeds. But the program offered a few silver linings. The X-3 offered valuable insights into inertia coupling, and also led to the development of the Lockheed F-104 “Stafighter.” The most unexpected benefit had nothing to do with the wings: The X-3’s ultra-high take-off and landing speeds required improvements in tire technology.

Today, you can visit the X-3 – the only one ever built – at the National Museum of the United States Air Force in Ohio.