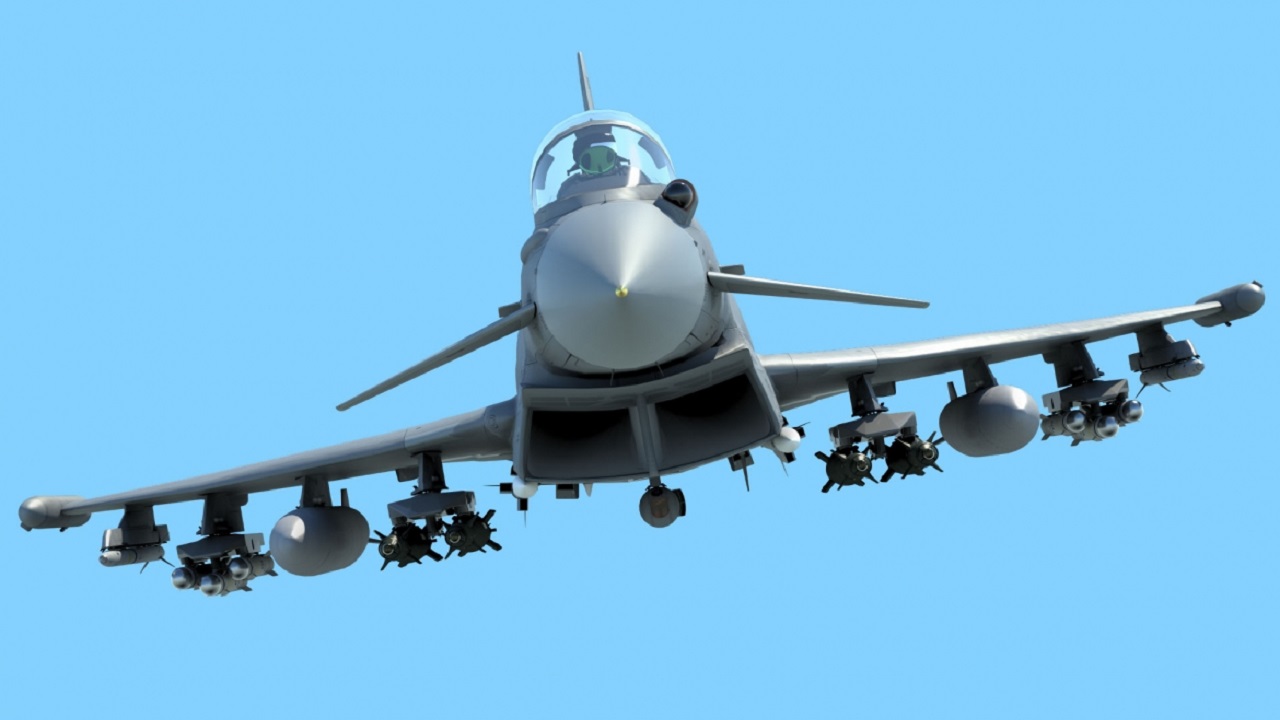 Typhoon fitted with the common launcher (computer generated image: for illustrative purposes only)

A few days ago, we at 19FortyFive published a story on the Tempest AKA Future Combat Air System (FCAS), Great Britain’s current effort at a 6th Generation stealth fighter aircraft meant to replace the Eurofighter Typhoon. Well, in the interest of equal time, or being “fair and balanced” (to conveniently borrow the Fox News slogan), I reckon that the Typhoon merits its own article. After all, future replacement projects or not, the Eurofighter is far from dead and indeed remains a viable aerial weapons system. Or, if you’ll pardon the lousy wordplay, this current proverbial “storm” certainly hasn’t subsided yet. With that in mind, let’s give the 4.5 Generation Typhoon her due.

Birth of a Eurofighter

“History has a way of repeating itself,” as the saying goes, and the Typhoon-to-Tempest saga is living proof of that saying. This current iteration of the Typhoon shares her name with a British WWII fighter-bomber, the Royal Air Force’s (RAF) Hawker Typhoon, and that particular Typhoon was replaced by…yep, the Hawker Tempest.

The Eurofighter Typhoon made her maiden flight on 27 March 1994, and was dubbed the Typhoon sobriquet in 1998. The planewas officially introduced into operational service on 4 August 2003.

Unlike the WWII Hawker iteration, this Typhoon, as the “Eurofighter” portion of the name indicates, is a multinational venture and one involving not only Britain but former WWII Allies and Axis adversaries alike (cue the “Kumbaya” song): manufactured by a consortium involving Britain’s BAE Systems, France’s Airbus, and Italy’s Leonard S.p.A; the primary users are the RAF, the Luftwaffe, the Italian Air Force (Aeronautica Militare), and the Spanish Air and Space Force (Ejército del Aire y del Espacio; and yes, I know, Spain had been technically neutral during WWII).

As the BAE official company website states, “As Europe’s largest collaborative defence programme, the aircraft is built on the strength of four key European nations and the capability and expertise of three of the world’s biggest defence companies.” The plane is also used by Austria, as well as the air forces of Gulf Cooperation Council (GCC) member nations Kuwait, Oman, Qatar, and Saudi Arabia.

The Eurofighter is a twin-engine, canard delta wing, multirole fighter designed originally for the air superiority role. To quote the BAE page again, “Eurofighter Typhoon is the most advanced multi-role combat aircraft available on the market today. Flexible, agile and enduring, it provides simultaneously deployable Air-to-Air and Air-to-Surface capabilities.”

The RAF, in particular, has designated the Typhoon as the FGR4. For the air-to-air role, the Brits have armed the FRG4 with the infrared Advanced Short Range Air-to-Air Missile (ASRAAM; the replacement for the time-honored AIM-9 Sidewinder heat-seeking missile). For ground interdiction and close air support (CAS), the British version of the warbird is compatible with GPS-guided Enhanced Paveway II and Paveway IV bombs, the Brimstone guided missile (I can’t help but wonder if that moniker was in turn inspired by the Hellfire missile), and a 27mm Mauser cannon.

Typhoons Taking the Test of Combat

Okay, all that sounds great in theory, but how has that actually worked out in practice, i.e. has the Typhoon proved its mettle in real-world combat?

The short answer is yes. The only air-to-air engagement for the Eurofighter thus far has been against a UAV; in December 2021, an RAF Typhoon shot down a “small hostile drone” over Syria with an ASRAAM, thus marking the first time the British military has downed another enemy aircraft since the Falklands War 40 years ago. This prompted Ben Wallace, the UK’s Secretary of State for Defense, to state that  “an impressive demonstration of the RAF’s ability to take out hostile targets in the air.”

In the air-to-ground role, the Brits successfully used the plane against Muammar Gaddafi’s ground vehicles in Libya in 2011 and against Islamic State/ISIS/ISIL/Da’esh targets in Syria starting in 2015. Meanwhile, the Royal Saudi Force has been employing the Typhoon as a mainstay of its controversial bombing campaign against Houthi rebels and for good measure, deployed the plane for Paveway strikes against Da’esh back in April 2015.

Typhoon Not Subsiding Yet

571 Eurofighters have been built as of October 2020. Tempest sequel or no Tempest, the Typhoon shows no signs of slowing down — literally or figuratively, anytime soon.

As noted by the official RAF website, “its most essential role remains the provision of quick reaction alert (QRA) for UK and Falkland Islands airspace. Detachments have also reinforced NATO air defense in the Baltic and Black Sea regions.”

And as the most timely proof of the Eurofighter’s staying power, literally five minutes after I finished typing the opening paragraph, this particular headline popped up at the top of my LinkedIn newsfeed, courtesy of DefenseNews: “Britain’s Typhoon jets to get radar, anti-jamming upgrades in nearly $3 billion deal.”